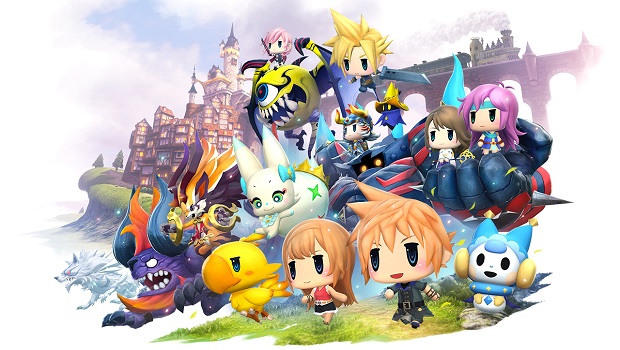 World of Final Fantasy is a game that spends so much time paying tribute to the series it draws from that it doesn’t spend enough time fleshing out the parts of it that make it unique. At its best, it’s a charming and lighthearted crossover with flashes of interesting battle design, but these fleeting moments of greatness are sandwiched between ones that expose just how shallow its isolated elements are.

Set in the world of Grimoire, an amalgamation of several Final Fantasy locations, World of Final Fantasy casts players as twin siblings Lann and Reynn. These two amnesiacs are contacted by a woman named Enna Kros, who tells the kids that they’ve essentially been living in a timeless realm for the past century, while the world outside has been subject to a hostile takeover by a force called the Bahamutian Army. This army uses monsters found in the world called Mirages as part of its forces, and while Lann and Reynn don’t remember it, Enna Kros assures them that before they lost their memories they were great Mirage Keepers, capable of commanding legions of creatures in battle. As such, Lann and Reynn are whisked off on a quest to defeat the Bahamutian Army, and hopefully regain their memories and save their missing mother in the process.

World of Final Fantasy’s story has a lot of moving parts, and while they do come together in a fairly satisfying way in the eleventh hour, throughout the game’s exposition is muddy, motivations non-existent, and themes inconsistent. The payoff is strong, but the ride suffers from some shallow storytelling, especially when Lann and Reynn are as one-dimensional as they are.

Lann plays the role of the reckless, dopey little brother, while Reynn is more reserved, up until the point where she has to scold Lann for his behavior in an exaggerated manner, usually as an attempt at humor. Their dynamic becomes tiresome very quickly, especially when World of Final Fantasy seems to constantly be manufacturing conflict between the two as it tries to capitalize on this silly side of their relationship. This is only encouraged by Tama, a cute but irritating Mirage, whose dialogue is made even more annoying by her weird, inconsistent vernacular quirks that were probably meant to be endearing. While Lann and Reynn’s voice actors do pull off solid performances, it does little to help elevate these unlikable kids past the childish writing.

With the main characters of the game as dull and unappealing as they are, World of Final Fantasy’s best moments come from its use of characters from other Final Fantasy games, and there are quite a few of them that fans will recognize, especially if they have a long history with the franchise.

Traveling through the world of Grimoire will take you to several Final Fantasy locales like Final Fantasy X’s Besaid and Final Fantasy VII’s Nibelheim, all set to re-scored and re-arranged music from across the series’ lifetime. There’s so much for a Final Fantasy fan to appreciate here, and these re-imagined worlds and songs are all beautiful to look at and hear. World of Final Fantasy’s colorful, chibi-based artstyle may not appeal to everyone, but I personally found it cute and endearing to see hardened warriors like Final Fantasy XIII protagonist Lightning and beasts like the fire-breathing Ifrit in this style.

While some of the Final Fantasy-native characters come and go out of the main plot rather quickly, you can still see them in side objectives, distanced from Lann and Reynn, where they can shine without being dragged down by our less than compelling co-stars. These vignettes give these characters another chance at the spotlight without being tethered to the main story, making them some of the more entertaining sections of the game.

Despite the whimsical and celebratory nature of World of Final Fantasy’s world and character cameos, the game does always go back to Lann and Reynn’s quest, which never manages to feel nearly as captivating as these side stories do with better characters and writing. However, Lann and Reynn’s abilities as Mirage Keepers do help to make World of Final Fantasy’s battle system interesting on paper, even if its execution doesn’t live up to the potential.

Throughout your journey through Grimoire, you’ll come across Mirages of varying size and ability, capturing them in a way not unlike Pokemon by weakening them enough to be caught. These monsters get added to your party and can be used in the game’s formation system called “Stacking.”

Lann, Reynn, and each Mirage you capture are all divided up by size: Small, Medium, or Large. Lann and Reynn are treated as Large in their natural “Jiant” forms, while also able to shrink down to the chibi size of other characters in the world called “Lilikins” and are recognized as Medium.

Using combinations of the two heroes and Mirages you can create Stacks, which are comprised of one of each size. Stacking allows Lann or Reynn to combine their stats and abilities with Mirages, creating one powerful entity in battle at the expense of more turns, or unstacking and battling separately, exchanging power for more turns. The sheer wealth of Mirages you’ll find through World of Final Fantasy means that there are a lot of options and ways to customize your characters to fill out certain roles, and the ability to stack and unstack with ease can add a lot of strategy to an otherwise standard turn-based battle system.

This would be the case if World of Final Fantasy’s combat wasn’t as mind-numbingly easy as it is, as even major boss battles never get difficult enough to merit changing your stack formations. I started both Lann and Reynn with one set of Mirages in their stacks fairly early on, and by the time I reached the final boss fights I was still using the same monsters and attacks, as I found pretty much any stack setup I had was capable of overcoming any enemies that got in my way. The potential of the stacking system is undermined by the lack of challenge or need for strategy, as spamming standard attacks will typically get the job done, and the irritatingly high frequency of random battles will probably keep you from ever having to grind in order to reach a high enough level to take out the game’s tougher foes.

World of Final Fantasy’s simplicity eventually wears away at the novelty of the stacking system until all that’s left is a repetitive turn-based RPG, and it becomes increasingly apparent just how shallow its systems are when the final act doesn’t present a challenge with anything more than an increase in enemy appearances and numbers.

But that’s the problem that runs through World of Final Fantasy: its ideas are good to even great, but they’re sabotaged by shallow execution. Its story is interesting, but undermined by poor exposition; its characters are set up with interesting potential motives, only to be muddled with grating characterization; and its battle system is built around a unique mechanic that the player never really has the opportunity to utilize.

World of Final Fantasy offers up a great tribute to the history of the franchise, but as its own game it has little to nothing of substance to say.