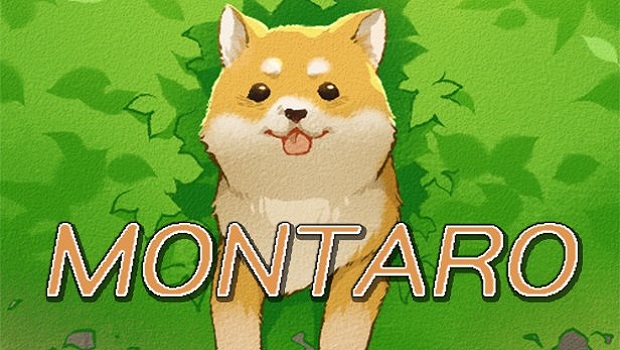 When I’m in the mood, I like looking for cheap things on Steam or the Humble Bundle, and I usually come up with decently great finds, such as The Music Machine or Cat Goes Fishing. When I want to be really frugal, I tend to look at games under $5, with such titles like Five Nights at Freddy’s or Pony Island popping up on the recommended list. However, sometimes I go even further than that, where the challenge is getting a game for the low price of one dollar. That’s how I found Montaro, a cute endless runner that is an adequate game for its price range.

I was expecting cute dogs. I wasn’t disappointed.

Montaro (a Japanese name meaning “little boy”) stars a little Shiba Inu as it goes on its merry way in a Japanese neighborhood, with the accompanying Doge meme being used extensively in the setting. Using just one button to jump, you have to guide your dog away from crows, bananas, potholes, and other treacherous obstacles while grabbing coins. Slipping on banana peels will cost you some health, which you can conveniently recover by snatching… ladies’ undergarments? It’s a weird premise that will have you chuckle here and there, and it’s just cute, inoffensive fun, all things considered.

On my way to steal yo’ pantsu!

While it feels like a simple endless runner, there are a lot of things that differentiate Montaro from its competitors in the increasingly bloated genre. The presentation and graphics are pretty tight and crisp for what it’s worth; the movement is fluid, and the pixel art style goes well with this title. While you can see all that this game has to offer in a matter of minutes, there are unlockable costumes that you can buy with the in-game currency you collect. As these can range from amounts up to 1000 coins, and you’ll average 50 or 60 coins per playthrough, the game will keep you busy for at least an hour or so. It’s also one of those things that you can fire up while trying to kill some time, and a nice game to show off to friends once they’ve grown tired of Goat Simulator’s zaniness.

You can unlock a costume of the shiba inu wearing a husky suit. The corresponding achievement references the infamous Moon Moon meme.

However, there are still a few issues with this game. While I get that it’s only a dollar, having a couple more backdrops would have been appreciated. The game’s sole level does change its layout when you score more points, but because it’s the only level offered, you may get tired of the setting after 15 minutes. It’s very light on content, so don’t go in expecting a bunch of different playable worlds or an overarching story.

Also, some of the mechanics can veer into the unfair territory very quickly. The only thing that you really need health for are bananas, while everything else usually kills you instantly. This renders the in-game health meter somewhat useless, though admittedly you can chain combos and kill crows by intentionally slipping on banana peels. (Don’t do this too much without grabbing undergarments, or else your Shiba Inu will get too stressed and won’t be able to jump. Yeah, it’s that kind of game.) Due to the randomized nature of Montaro, there were also runs that I was able to score a few thousand points relatively easily, while I struggled to hit a thousand points some other times.

Look at this cool cat. He belongs in a jazz club or something.

Finally, I really wished there was an online leaderboard of some sort. With a score attack game, a leaderboard is an essential mechanic, and without it, it kind of hampers the competitive feel of the game. While there is a standard “top score”, that’s the only real metric you have here. Even a local leaderboard could have increased the longevity of the title, but as it stands, you can always try to beat your highest score.

Still, for a dollar, you can’t go wrong with Montaro. It’s a serviceable endless runner that’s good for a few chuckles, and if you can stomach the lack of content, you’ll find an enjoyable little game between rounds of MMOs.

Montaro is an endless runner that does what it needs to. Its silly charm and low price of one dollar makes up for its sometimes unfair mechanics and limited content.

Elisha Deogracias is an aspiring accountant by day, freelance writer by night. Before writing for Gaming Trend, he had a small gig on the now defunct Examiner. When not being a third wheel with his best friends on dates or yearning for some closure on Pushing Daisies, he's busy catching up on shonen manga and wacky rhythm games. Mains R.O.B. in Smash. Still doesn't know if he's a kid or a squid.
Related Articles: Montaro
Share
Tweet
Share
Submit