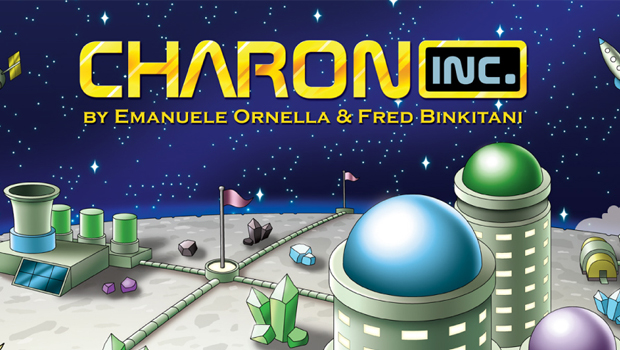 Far out, near the edge of our solar system there lies a planet… oh wait, no, just a dwarf planet. And this dwarf planet, Pluto, is orbited by a moon… nope, scratch that, it is orbited by another dwarf planet*, Charon. In the near future, scientists find vast fields of minerals scattered all over Charon. This moon/dwarf planet is obviously the best place for corporations to exploit in this near future, even though it is about 5 billion kilometers away. You are one of those corporations fighting for control of the wild fringe.

*This is still up for debate, but either way Charon is an amazing member of our solar system. Check it out!

In Charon Inc., players are competing for the scarce resources found on this distant moon. Each player will need to add the best and most impressive buildings to their space colones while staking a claim and mining various precious minerals.

At its core Charon Inc. is a game about area control and resource management. Each round players place claim markers on various parts of the moon in order to collect mineral resources. At the end of four rounds, whichever player has accumulated the most points wins. These points are scored by building various buildings using resources that are collected from the moon.

Claim markers start the round occupying each of the available special actions available to players. There are five action spaces, however only four markers are placed each round. The sole remaining marker determines what special action that player can take. If there multiple markers on a space, the action may not be taken. These actions range from drawing more cards, getting wild resources, and trading resources with the bank.

Claim markers are placed either on the corner, the edge, or inside of an area on the moon. Once a marker is placed, it is blocking others from being played in the same space. When all claim markers have been used, each player collects resources based on their influence on each area. If a player has more claim markers touching an area that anyone else, they collect the resources. If there is a tie, the claim in the middle of the area gets the resources, and then the claim on an edge.

Once resources are collected and special powers are assigned, each player uses the resources they collected to construct buildings either from their hand or an open communal pile. Each of these buildings are worth varying amounts of points roughly correlated with the amount for resources needed to build. At the end of four rounds, whoever has the most points from these buildings is declared the winner.

Charon is chock full of shiny acrylic gem looking resources. These are the same high quality pieces used in many games, such as the ore and rubies in Caverna, the soul points in Ascension and all of the elements in Compounded. I am a fan of this trend because they always look so flashy. Charon’s other components are a little higher quality than I was expecting. The claim markers are plastic flags with sturdy little bases, and the board is nice and thick adding to the production value.

The rules are easy to teach, with the only hiccup being the tie breaking rules of claim placement. This one rule can be a snag for some new players. The rule book is alright, but some confusing parts make it seem like no one actually proofread them. Just little things like paragraphs not completing and sentences not making any sense. Thankfully the rules are not that complicated to begin with.

The game supports two to five players, but I would not recommend playing with five as the competition is too fierce, and with two players too little competition exists to make it fun. Keeping the players down to three or four seems like a good choice. Games took about an hour to explain and play. With only four rounds, gameplay moves quickly.

Charon Inc. will never play the same over multiple games. Enough randomization exists in which minerals go where and what cards players have access too. In addition, how your opponents choose to play greatly affects your own strategy from game to game.

Speaking of strategy, Charon Inc. has a brand of strategy that does not jive very well with my tastes. A significant amount of tension comes from where people choose to play. If another player is attempting to gain a certain territory, it is very hard to counter and still gain the other resources you need to play. This sounds like normal area control, which I greatly enjoy; however, in Charon Inc. the other players, who just happen to stay out of the contention, reap huge rewards. This is painfully apparent in a five person game. Most of the rounds ended with two or three people collecting four or five gems, and the rest of the players collecting ten or twelve. 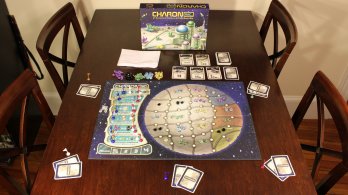 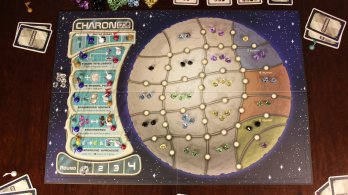 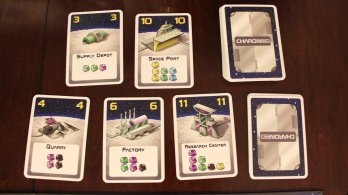 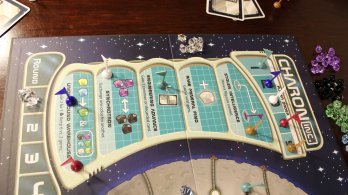 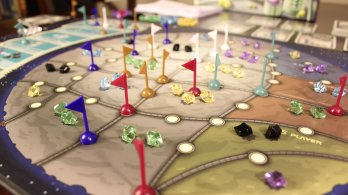 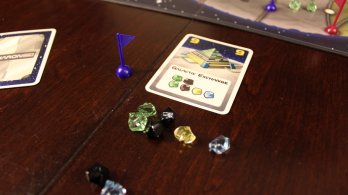 One aspect of the claim marker placement that is worth lauding is the reverse worker placement of the special actions. The remaining, unplayed claims indicate which action players can take. Because this is a subtractive mechanism, it makes for an engaging and interesting play of slowly whittling down your options, all the while keeping an eye on your opponents. This also gives way to your last pick being between a highly contested action, that you may not get, and a different backup action space. This is possibly my favorite aspect of the game.

The theme of Charon Inc. could be a little more pronounced. The mechanics do little to support the space theme. The game could easily be rethemed with a western gold rush or with a stock market flavor. The art used in the game is functional and playable but, like the theme, not overly evocative. I did appreciate how each of the buildings has a color palette that matches the gems needed to build it.

I would have liked to see some variation in the buildings or the resources. All of the resources have basically the same value. The only difference being which are populated with one gem, and which ones have three. As an extension, the buildings are equally as bland. Each building in a point level has the exact same requirements, but with different gem types needed. It would be interesting to see special powers introduced by the buildings, or to have some rarity in the gems. That might alleviate the rough strategy choices made by players.

Charon Inc. is not a bad game, but it is not really one I am going to tell all of my friends about. Charon Inc. is playable, and offers some interesting and sometimes difficult tension. This game is possibly a good choice to play with younger gamers to introduce them to the area control mechanic. For the rest of us, the most common response is most likely "Ok, what is next?"