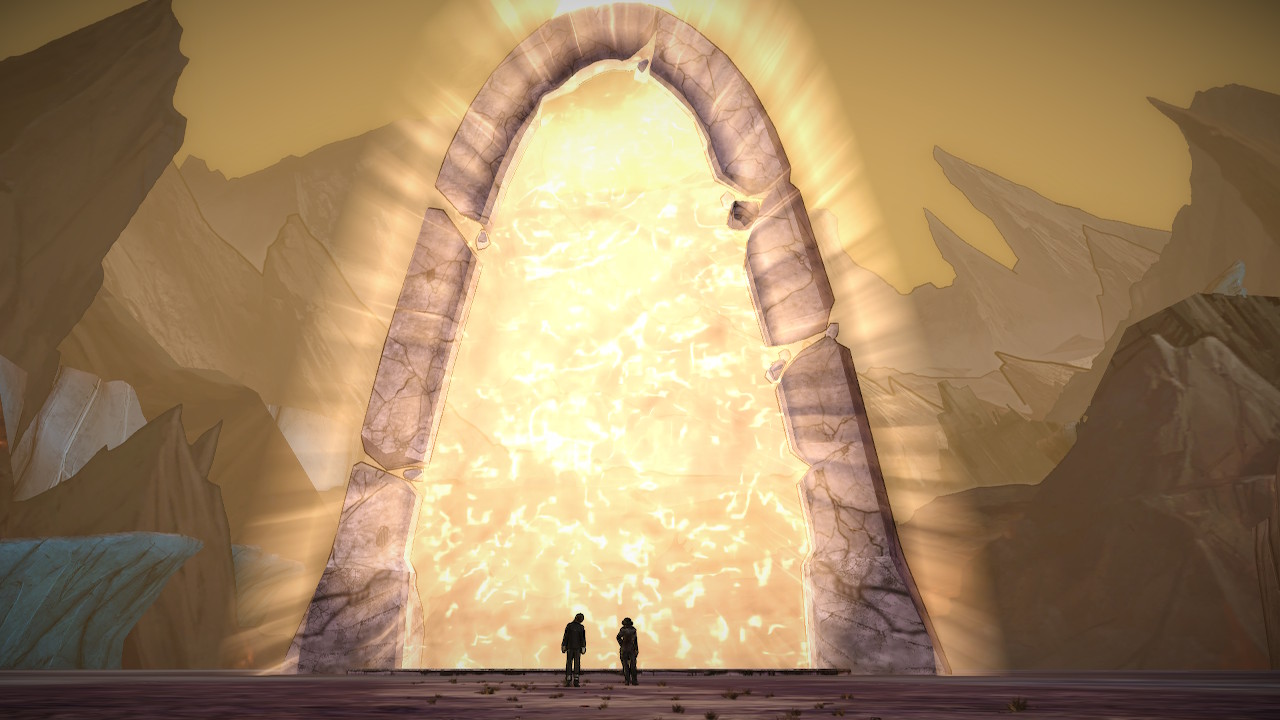 It’s been a while since the demise (and upcoming resurrection) of Telltale Games, but we’re only just now seeing what will happen to their legacy of games. A few former employees formed Skunkape Games and put out last year’s excellent Sam and Max Save the World Remastered, with remasters of the other two seasons upcoming. While most of the late corporation’s titles, like the excellent Batman Season 2 and the less excellent Guardians of the Galaxy, are still in a sort of limbo we at least have access to some of the best of their catalogue. The Walking Dead Season 1 and The Wolf Among Us are still available for purchase on some storefronts and now 2K has rereleased Tales from the Borderlands, another one of my favorites.

Tales from the Borderlands continues where Borderlands 2 left off, this time following newcomers Rhys, a Hyperion salary man, and Fiona, a Pandoran con artist, as they uncover the mystery behind the Gortys Project and the Vault of the Traveler. You swap between the two whenever the game feels like it to do quick time events, make dialogue choices, and explore the rare adventure game style location. If you don’t know later Telltale games, it’s essentially a very high budget visual novel and it’s also very easy to see how they went bankrupt with a new licensed song to introduce each of the five episodes. Back in 2015, Editor Kenneth Shepard gave the game overall a 90 in his review of the fifth episode, and I think that score holds up even after all these years.

Tales from the Borderlands excels at drawing a contrast between the insane cast of characters the franchise is known for and our more human protagonists here. The season is filled with hilarious moments between bros (bro!), devastating deaths (Catch a Riiiiiiiiiiide!), and everything in between. This was arguably when Telltale were at their peak and pusing their in-house engine, the Telltale Tool, to its limits so unfortunately there’s a lot of cracks. Sometimes characters will repeat themselves while the scene has moved on, environments can take a second or two to load in, and overall there’s just a lot of hang ups where the game will freeze for a moment after a jump cut. It’s a shame 2K didn’t take this opportunity to improve the game in the slightest since the original release, but it plays on Switch almost exactly like it did back then on PC with a gamepad.

There is one big omission here that makes this a bit more hollow of an experience here and that’s the choice summaries found at the end of each episode. See, normally when you finish one episode you have the chance to see a summary of your choices in that episode as well as some of their immediate consequences and compare them to other people online. This is completely absent here, even from the main menu. I understand not being able to compare choices anymore, as that would require server space to store the aggregate data, but not having it at all just feels wrong.

Aside from that, this is exactly the same game from 2015, warts and all. The characters, story, and humor are great, choices feel impactful, and I still can’t tell which stick I’m supposed to use for QTEs (it seems to just pick at random). While I wish 2K had done a bit more than a simple port, it’s great to have this game on modern consoles’ digital storefronts.

Tales from the Borderlands is just as good as you remember it. The characters feel real and human, while the plot is compelling and worth seeing through to the end. This port could have used a few upgrades or even just kept the choice summaries, but at the end of the day it’s a game I’ll replay for years to come.

David is the kind of person to wear his heart on his sleeve. He can find positives in anything, like this is a person who loved Star Fox Zero to death. You’ll see him playing all kinds of games: AAAs, Indies, game jam games, games of all genres, and writing about them! Here. On this website. When not writing or playing games, you can find David making music, games, or enjoying a good book. David’s favorite games include NieR: Automata, Mother 3, and Gravity Rush.
Related Articles: Tales from the Borderlands
Share
Tweet
Share
Submit