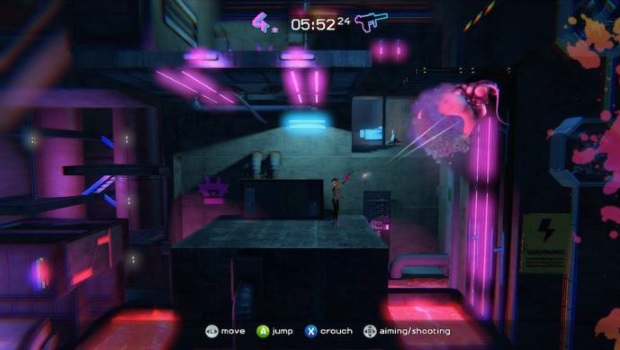 Trials of the Blood Dragon continues the storyline found in Far Cry 3: Blood Dragon, but instead of being a shooter it is at it’s core, this iteration brings forth both the over-the-top side-scrolling antics seen in previous Trials games along with a cheeseball plot and presentation that goes toe-to-toe with a movie like Kung Fury. Frankly, I found spectators enjoyed the game more than I did, and with good reason.

While this combination sounds like a win-win, the problem is that other than a few standout gameplay moments and consistent cutscene awesomeness, there really isn’t a lot of driving. There are parts that end up off your bike, and this is where the game gets bad.

Half the game offers up odd platforming tasks, often to a frustrating level. Not that I didn’t enjoy using the RC car, racing across two warheads as the missiles were just launching or having to shoot while on the bike. Even using a grappling hook while careening through a myriad of caves on a minecart had its own charm. Jetpack and on-foot platforming levels ultimately foul the entire experience.

Now, I don’t pretend to be the best at games – some I have strengths in, and some require practice. RedLynx games were always a little frustrating in finding balance with the sometime arbitrary pull too far forwards or backwards while in mid-air. I don’t always live checkpoint-to-checkpoint, but in this version I did, and thankfully they are plentiful as the floaty and disconnected controls of platforming never feel like well-executed gameplay moments, unlike some driving scenes.

If you don’t reach the end of a level on time it still allows you to progress in the game, albeit with an F. Frankly speaking, this is a badge of honour for the jetpack level where I would have likely stopped playing entirely were I not writing a review, and possibly never come back. The sub-level requiring you to carry a bomb by jetpack, with some of the worst controls ever, cost me 86 lives to complete. Were it not for the fact that I was playing with an Xbox Elite controller, I guarantee you lesser hardware would been sent sailing across the room.

Speaking of the Elite controller, if you have the triggers set to short, you cannot get full power from your motorized vehicles. In some cases it almost acts as a cheat as you don’t often spin out, however there are some moments in-game which require more throttle than you can get.

Sadly, the Trials games have always been about playing over and over in trying to get a better score, and while you can do this, you’re better off pulling up an older Trials game once you’ve completed a single run-through.

Trials of the Blood Dragon

Trials of the Blood Dragon continues the storyline from where Far Cry 3: Blood Dragon ended. If you’re driven to find out what happens next to Rex Power Colt and his two kids, Roxanne and Slayter, it looks like you’re buying this game. You won’t hate it, and the charm of the presentation is enough to keep you moving forward, just don’t expect it to be the thrill that other Trials games have been able to deliver.

Born and raised in Winnipeg, Canada, at a young age I was forced to decide whether the harsh northern winters were going to claim my fingers, or to turn to the safer pursuits of indoor activities. Little did I know that a little game called Ninja Gaiden would bring my digits more pain than frostbite ever could. Starting with Vectrex and C64 games and moving forward through the era of electronic entertainment, I sampled as much as I could in the different platforms, and began my interest in PC gaming from wrestling with DOS memory management. While console games were a part of my earliest gaming memories and I certainly had played on most platforms including 3D0, all things Nintendo, PS1 and the like, truly the PC was my domain until the Xbox. As an old PC gamer, I ever chased the cutting edge technology. Eye of the beholder with CGA 4 colors was my first step down the the path of blowing thousands of dollars on PC upgrades over two decades. Ultima 7, with the Guardian talking to me through my monitor, still haunts my dreams and keeps me ever hoping for a decent Ultima 8 and 9. From the 3DFX SLI VooDoo2s and Aureal to today's GPU driven DirectX games, the new and shiny pictures seem to keep me going. My PC gaming has slowed down with the market shift though, and although I have choice games that will ever be on PC, I have found myself in console gaming with a bit of portable gaming in my life. Back around the turn of the millenium (and long before fatherhood), I had fired off an email offering to help Ron with a little-known site called ConsoleGold. Little did I know it would be be a part of my life to this day. While I've seen my fair share of shovelware (thanks Ron!), I manage to try and find the fun in most games. Leaning towards sandbox and action titles, I've grown to love games for their potential to reach art. Console agnostic and excited for the progress of tomorrow, I fancy the latest and greatest, but still enjoy the good old classics ... as long as they've been revamped from their 8bit graphic roots.
Related Articles: Trials of the Blood Dragon
Share
Tweet
Share
Submit