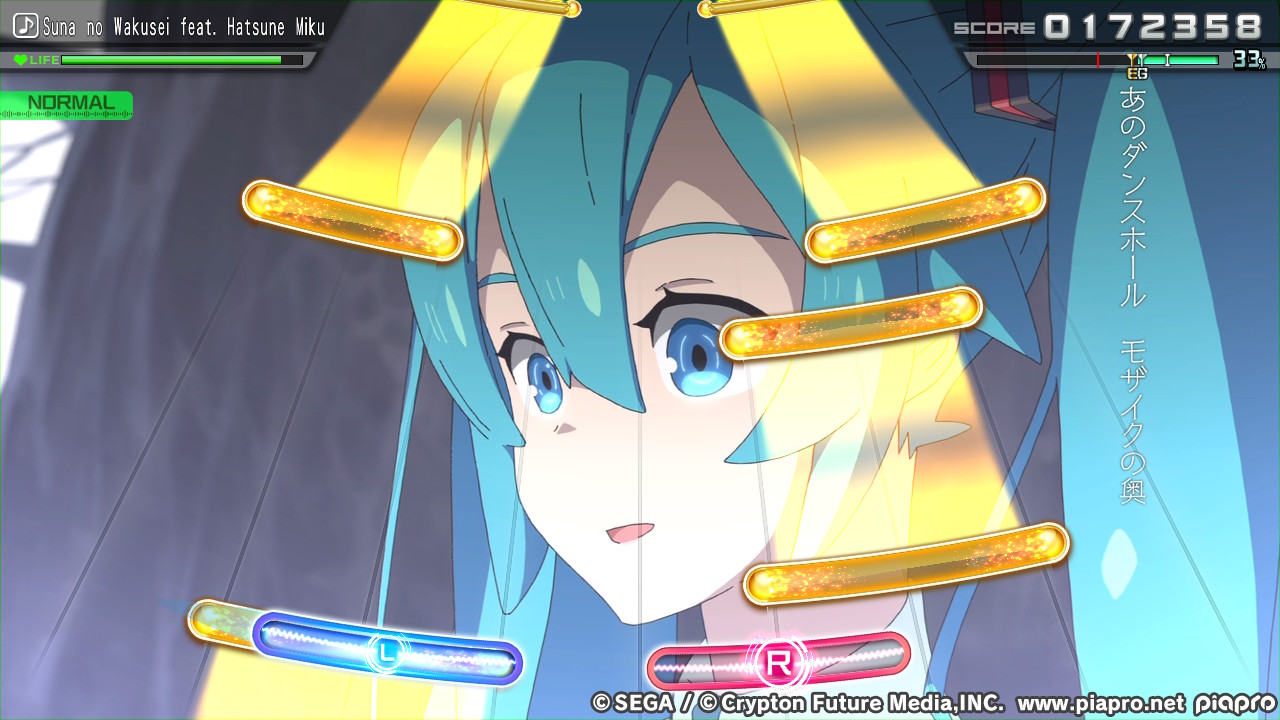 Hatsune Miku: Project Diva Future Tone remains one of my all-time favorite releases this generation, if not just the last decade. With a sprawling amount of content, addictive gameplay mechanics, and almost arcade-perfect graphics, it’s a treat for any music game fan. I universally sing of its praises, so I was wondering where the Crypton family of Vocaloids could go next; turns out, it would go semi-portable with Hatsune Miku: Project Diva Mega Mix for the Nintendo Switch. While it does have a few missteps in bringing the series over to the Nintendo console, it’s still a great package for Project Diva fans and casual music game for new players to jump into. 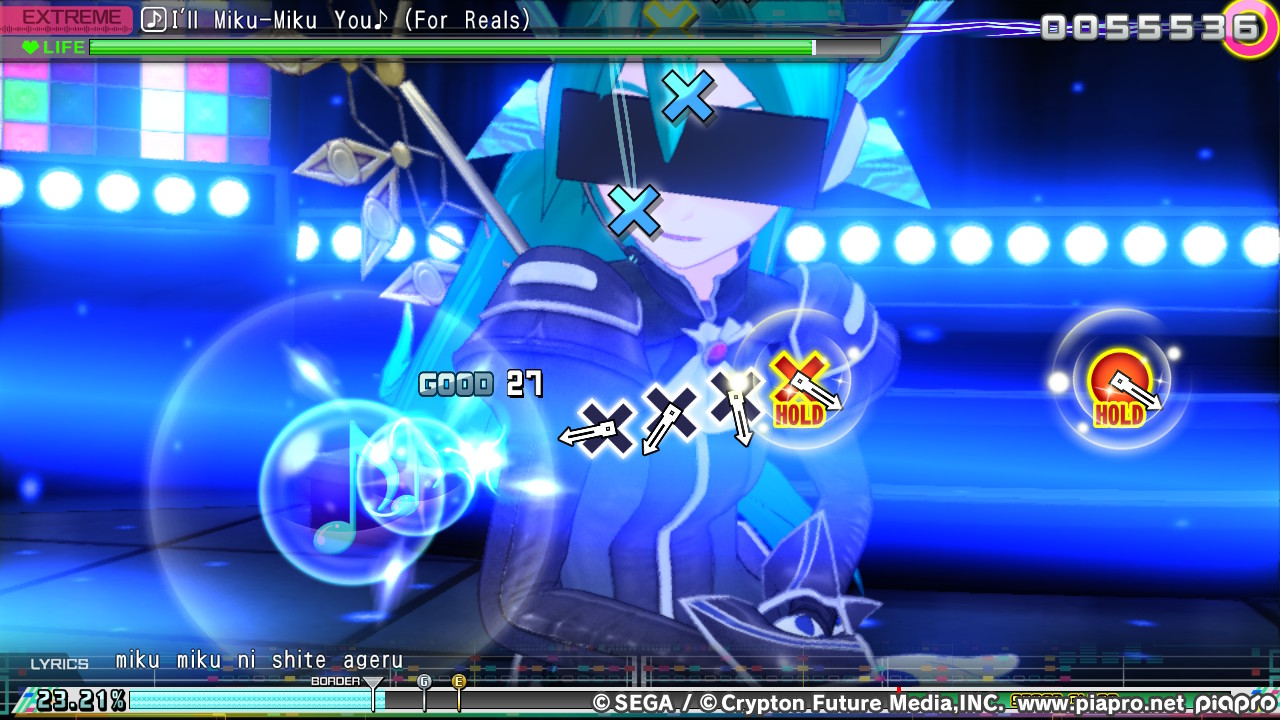 Getting some pretty neat 2B vibes here.

Hatsune Miku: Project Diva is a rather simple affair: You press buttons based on what is shown on-screen (the default ABXY of the Switch face buttons can be changed to the PlayStation face buttons, thankfully), and some buttons require holds that you can continue to press for more points. There are also slides this time around, where you’ll need to use the analog sticks to move right or left. It’s a simple system that will ramp up by the time you get to songs in the Hard difficulty.

By default, there are four difficulties (not counting Extra Extreme charts for some of the songs), though in order to play the hardest difficulty, you’ll need to pass the difficulty before it. It’s great that Mega Mix keeps the system from Future Tone, as previous console titles required you to play Normal and then Hard to play Extreme charts. Another staple of the Project Diva series is the fact that there are different costumes, known as modules, that you can equip by purchasing them with in-game currency you earn. While there are recommended modules for most songs (over 300 unlockable ones!), you can use any module and character to play. 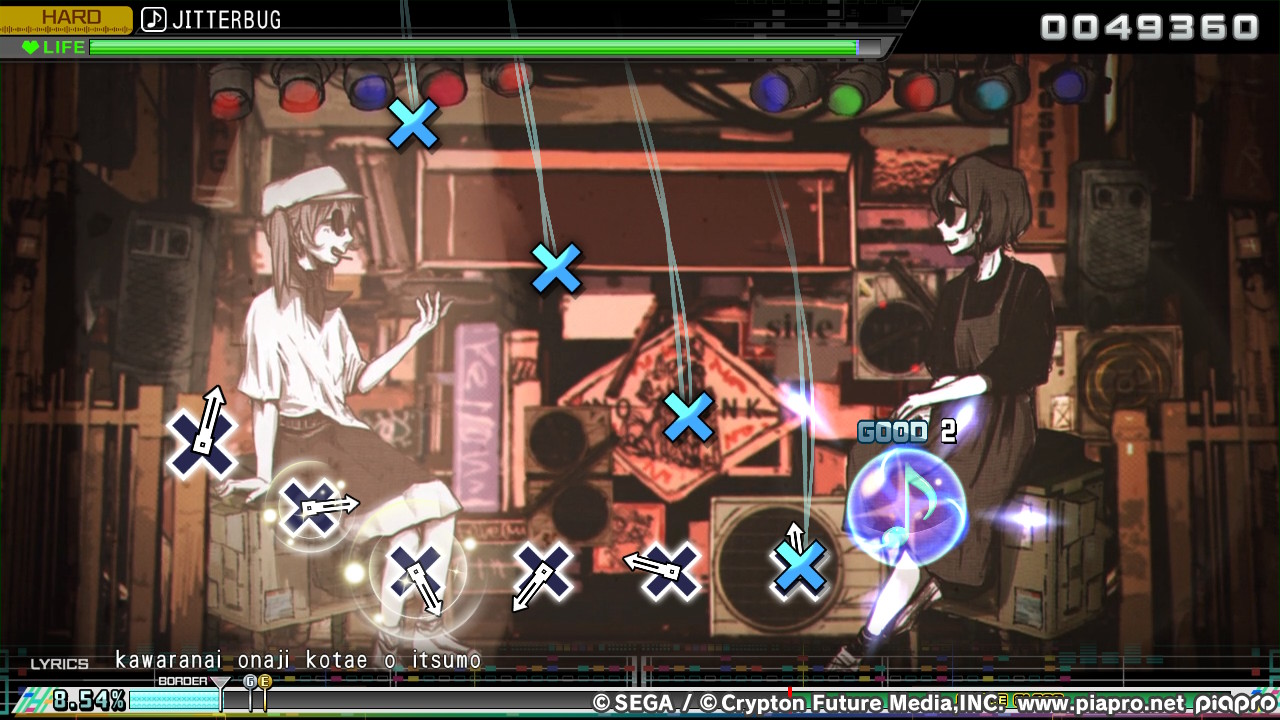 Jitterbug (a duet featuring Meiko and Miku) is probably my favorite new song out of the bunch.

That’s nice and all, but you’re here for the exclusive Mega Mix content. New to this game is the ability to customize t-shirts that your Vocaloid can wear; it’s not the most robust editor, but considering how much we can customize designs in games like Animal Crossing using basic tools, it’s cool that the option is there. You can also unlock other models like Kasane Teto among others, which is a nice bonus for those that wanted to explore other characters than the normal Crypton six. (I just wish we could get GUMI in here; alas, my dream of playing Matryoshka on a console Diva game will have to wait.) You also have ten songs new to the franchise, from the theme song Catch the Wave to my favorite of the bunch, JitterBug. Whatever song you choose, you’re getting some of the best Project Diva has to offer. 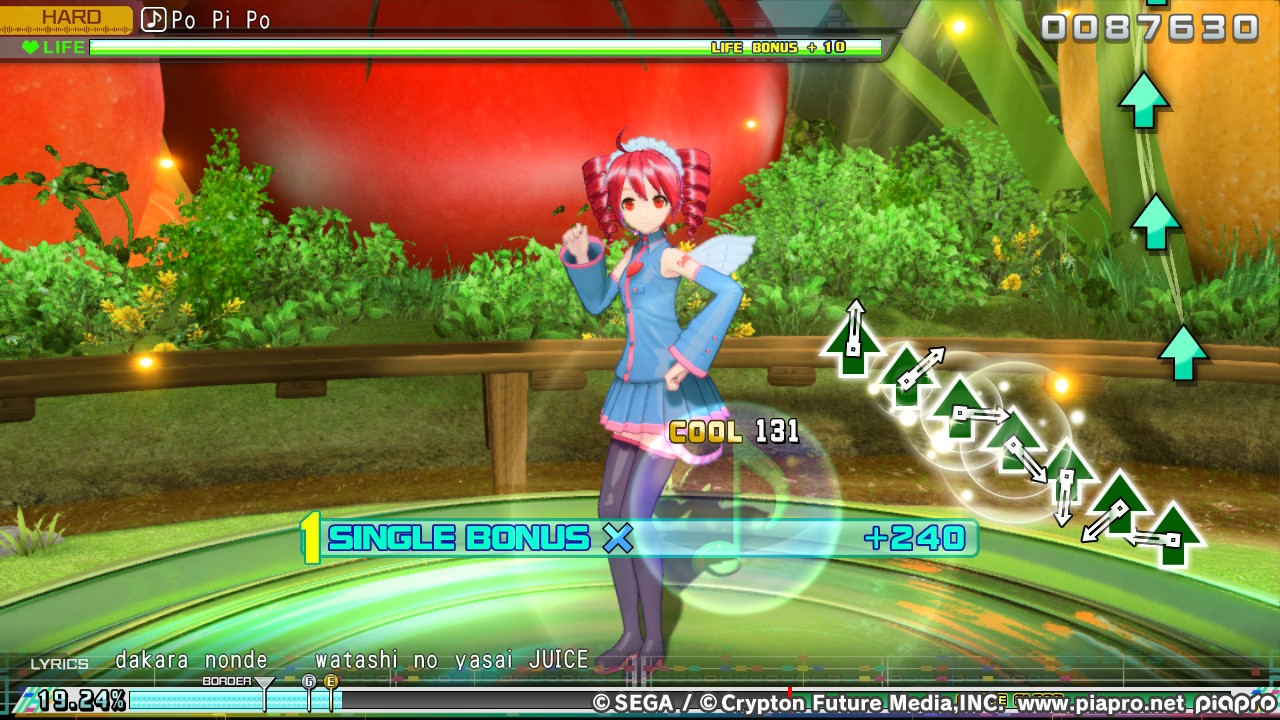 As mentioned earlier, I thought that letting players choose from Nintendo or Sony button layouts was a godsend, as I couldn’t get used to the default Nintendo scheme. X is normally the bottom face button, whereas it’s technically a directional up input when comparing the action with a Joy-Con controller, which does screw up my muscle memory. It’s a good amount of new content that nearly justifies a purchase if you’re coming from Future Tone (though more on this later).

However, the biggest addition in Mega Mix is the Mix mode, which can be played from the beginning. It utilizes two Joy-Con as you swing both of them and hit notes using the ZL and ZR buttons. It consolidates the button presses as you only have one big button on each hand to hit, and also need to follow holds by controlling an on-screen trail. For the rhythm game fans out there, it feels like a half-circle version of Wacca, and in theory this is an innovative mechanic that does breathe a little bit of life into the series. However, in practice it becomes a tacked-on extra mode that you’ll probably try out for a few songs and then ditch for the classic Arcade mode. You see, unlike the Arcade mode where you can freely customize button mapping and inputs to whatever you see fit, you can only use the default control scheme with Mix mode. That means you’re stuck using the ZL/ZR buttons and flailing your arms around in order to play, whereas it could have been much better to utilize face buttons. (Granted, with a new Switch firmware update, you can map different buttons, but it’s a hassle especially since these remaps affect the entire console, not just a certain game.) This unfortunately means my fingers kept getting cramped after playing a couple of songs on Normal.

The motion tracking is also inaccurate as a song continues; it feels like playing the motion control mode of Taiko no Tatsujin: Drum ‘n’ Fun!. Basically, it’s fun to play in a casual setting on easier difficulties, but don’t expect to get serious with your scores. It’s telling that this mode also lacks an Extreme difficulty option, though with the hard charts, they’re already frustrating as is. I appreciate that this game tries something different, but it feels clunky and I wouldn’t suggest playing it for more than 15 minutes straight. 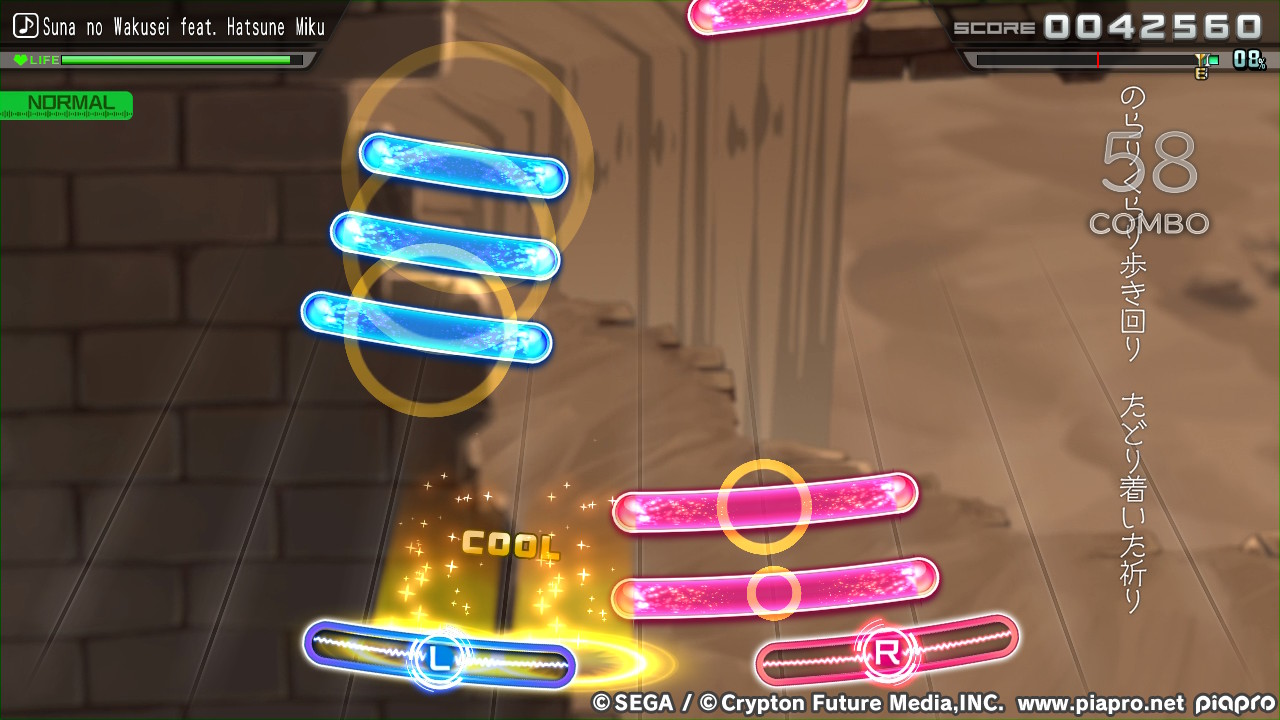 It’s fun for a while, but after a bit your fingers are gonna get cramped.

In terms of performance, I’m surprised that Mega Mix runs pretty well in handheld mode. While the game advertises 60 FPS, there are noticeable framerate drops when playing songs with dancers in the background. This is alleviated with songs that have pre-rendered music videos in the background, and it runs smoothly docked. Mix mode is another story, as you can see the framerate dip with whatever song you play undocked. All in all, while it’s a graphical downgrade to the PlayStation 4 Future Tone, it’s still impressive to see the game run comparatively well on the Switch.

Finally, the biggest sticking point I have with Hatsune Miku: Project Diva Mega Mix is with the overall amount of content. While unlocking modules and accessories will take you quite some time, the base game only contains 101 songs. In terms of most Miku games, this is a huge amount (most console iterations have 30-40 songs normally), but since this is based on Future Tone, it’s less than half the songs represented here. 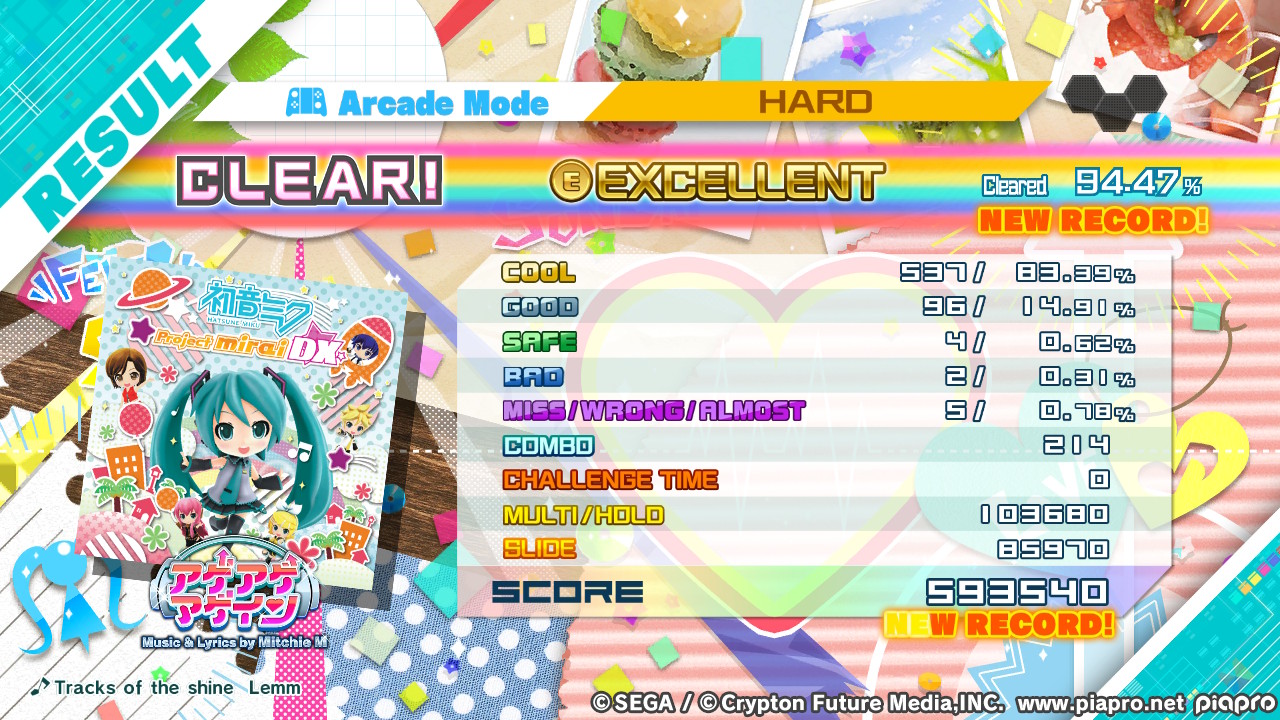 Look, I’m nowhere near pro player hisokeee, but I’m getting there!

With over 200 songs in the PlayStation 4 game, it feels somewhat barren and at times, egregious considering that the only DLC that’s currently going to be offered are songs that were cut from Future Tone’s songlist. That means you’re paying $60 for fewer songs (to clarify, the base game is $39.39, while you can get a bundle that includes all DLC for $60), since it’s only 36 additional songs. Even though there are 10 new songs that are included in the game, these will be available on the PlayStation 4 version as DLC in the future. That said, it’s still a lovely package that’s a great entry point to the wonderful arcade version of Hatsune Miku: Project Diva; it’s just a little overshadowed by its PlayStation 4 counterpart.

While slim in content compared to its other console counterpart, Hatsune Miku: Project Diva Megamix is a wonderful time for rhythm game enthusiasts. With some exclusive songs and great gameplay mechanics, you should sing and smile along with the lovely world of Hatsune Miku and her friends.

Elisha Deogracias is an aspiring accountant by day, freelance writer by night. Before writing for Gaming Trend, he had a small gig on the now defunct Examiner. When not being a third wheel with his best friends on dates or yearning for some closure on Pushing Daisies, he's busy catching up on shonen manga and wacky rhythm games. Mains R.O.B. in Smash. Still doesn't know if he's a kid or a squid.
Related Articles: Hatsune Miku: Project DIVA Mega Mix
Share
Tweet
Share
Submit