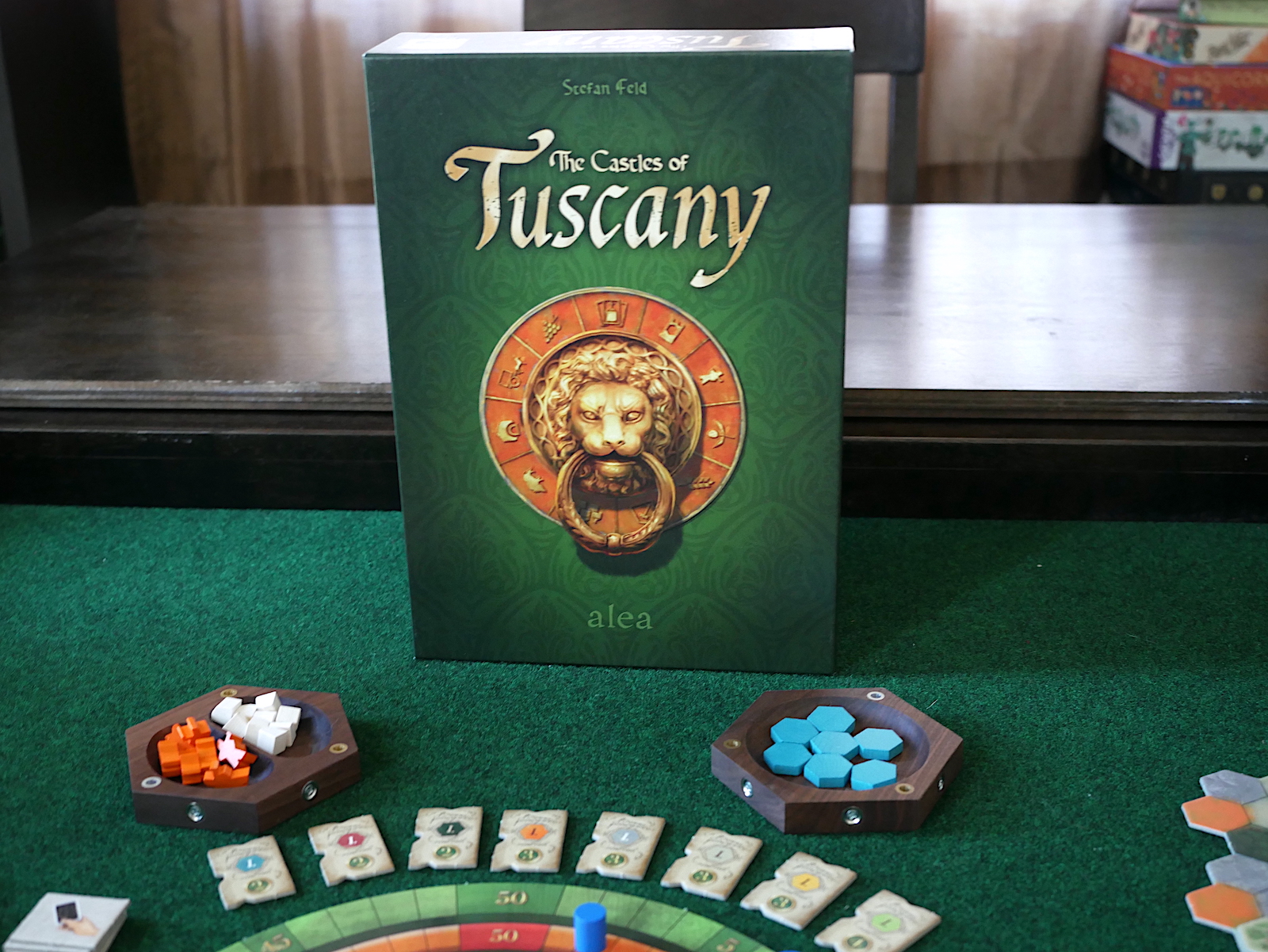 My family isn’t exactly chock-full of avid board gamers. While it’s never hard to get something simple enough to the table, the later episodes of My City where things get a bit more complex were bordering on too much for them. I have played Azul and Quacks of Quedlinburg beyond my ability to reasonably estimate, so when I put Castles of Tuscany on the table and received some hesitant faces, I was by no means surprised; I could put a rethemed Candyland in front of them and they still wouldn’t be sure if they could handle it. But when everyone walked away from the game having enjoyed it, I counted that as a huge win. Those of you who have friends and family who dabble in the hobby but are yourselves avid board gamers will know that trying to find a game that hits the sweet spot where it’s simultaneously not so complex where it’s over everyone’s head but not so simple that it’s boring is a task not dissimilar to undertaking the quest to find the holy grail.

Tuscany definitely checks that first need, since the rules are certainly simple enough: on each player’s turn, they do one of three actions. You either draw cards from the region deck, take and replace one of the face-up tiles, or discard two matching region cards to place one of their tiles that they had previously picked up on their map, collecting the appropriate rewards. These are generally tied to the color of the tile that was just placed, but players may score additional points if they completely filled in a contiguous area of a color, and even more if they’re the first or second to fill all of a color on their map. 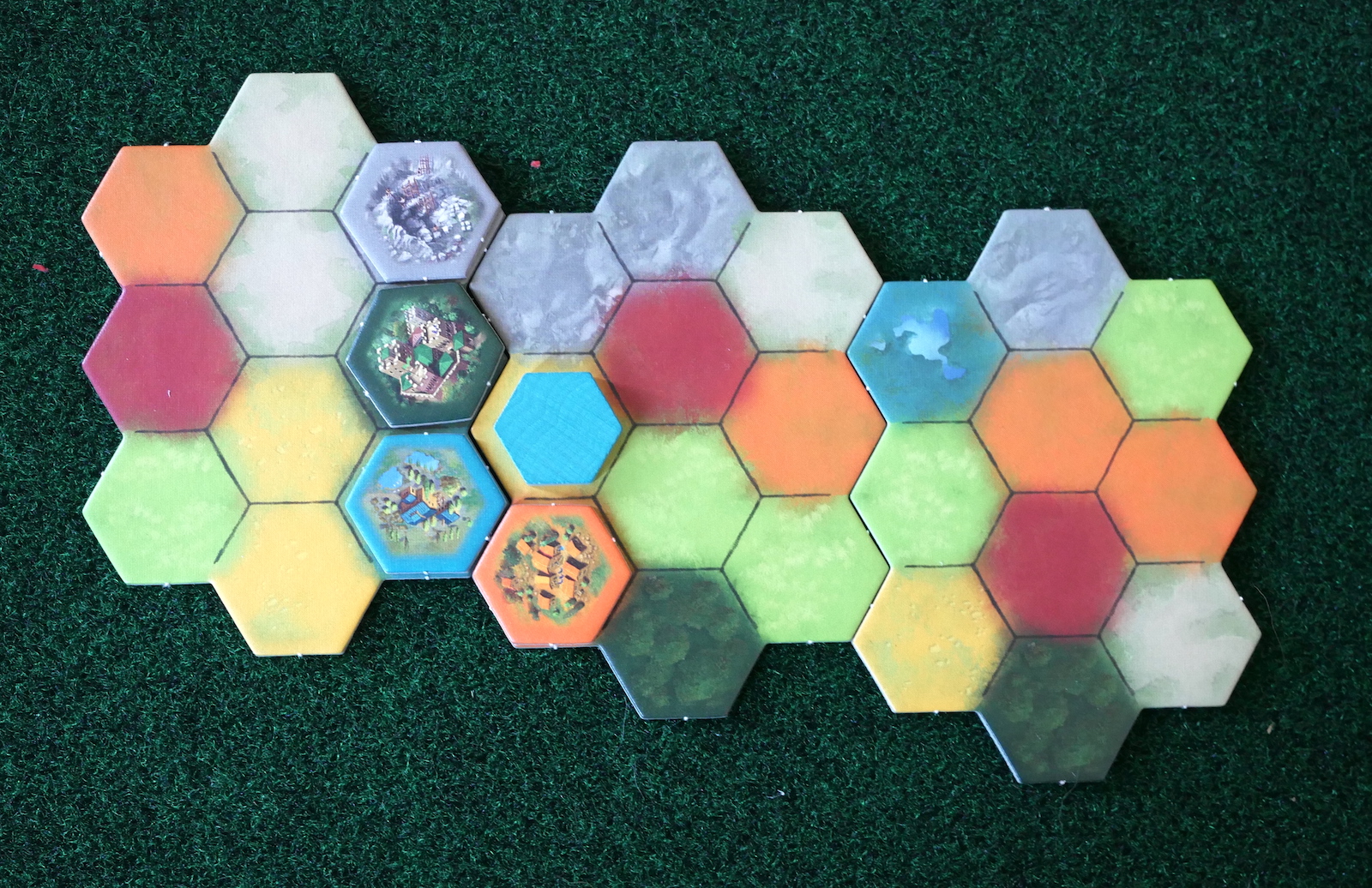 Now I’ll tell you the bit I’ve been holding back, the portion of Tuscany that keeps it straightforward enough for my family but gives it an extra twist to keep it interesting. You see, points in Tuscany come in Christmas flavors, spearmint green and cherry red. With few exceptions, the points players accrue during their turns will be minty green, and at the end of each of the three rounds, players add their green totals to their red totals, without ever resetting either. After the third and final addition, green goes out of fashion, people only care about red anymore, and the player with the most cherry-flavored points wins.

Remember when I mentioned that when you place a tile, you get points if you finish an area of the same color? Of course, as those areas grow larger, they’re worth more points, at a rate that makes it much more efficient per hex to do larger areas. Here’s where your logical gamer brain kicks in and recognizes that, since you’ll have a limited number of tile placements, obviously the most optimal play is to build your map so there are a ton of three-size areas, and exclusively work on those until you’re finished with them. But possibly, that’s not actually a big brain move, it’s a silly dumb-dumb move. These rounds are deceptively short and you very rarely actually have any control over how long they will last, so you’ll probably not score any points in the first round, and because of the game’s additive scoring, points acquired in the first round are straight-up worth thrice as much as those acquired in the third round, and 150% as those in the second. While there’s nothing stopping you from just spending every turn picking up a tile from the central market and making the game crazy short as a result, unless you’re crazy lucky with your card draws you won’t actually be placing any of those tiles. So sure, you’ll end the game before anyone can rack up a crazy score, but you won’t rack up anything . News flash, their five points will quite handily beat your zero.

Though all this certainly helps muddy the math of optimal play a good bit, it would still probably be possible to sit down and analyze  which color has the best placement rewards and how they appear on map tiles, combining that with upgrade tiles to formulate out the best strategy in every given game. Personally speaking, the best games are those that defy mastery or “standard openings” (I really dislike chess). 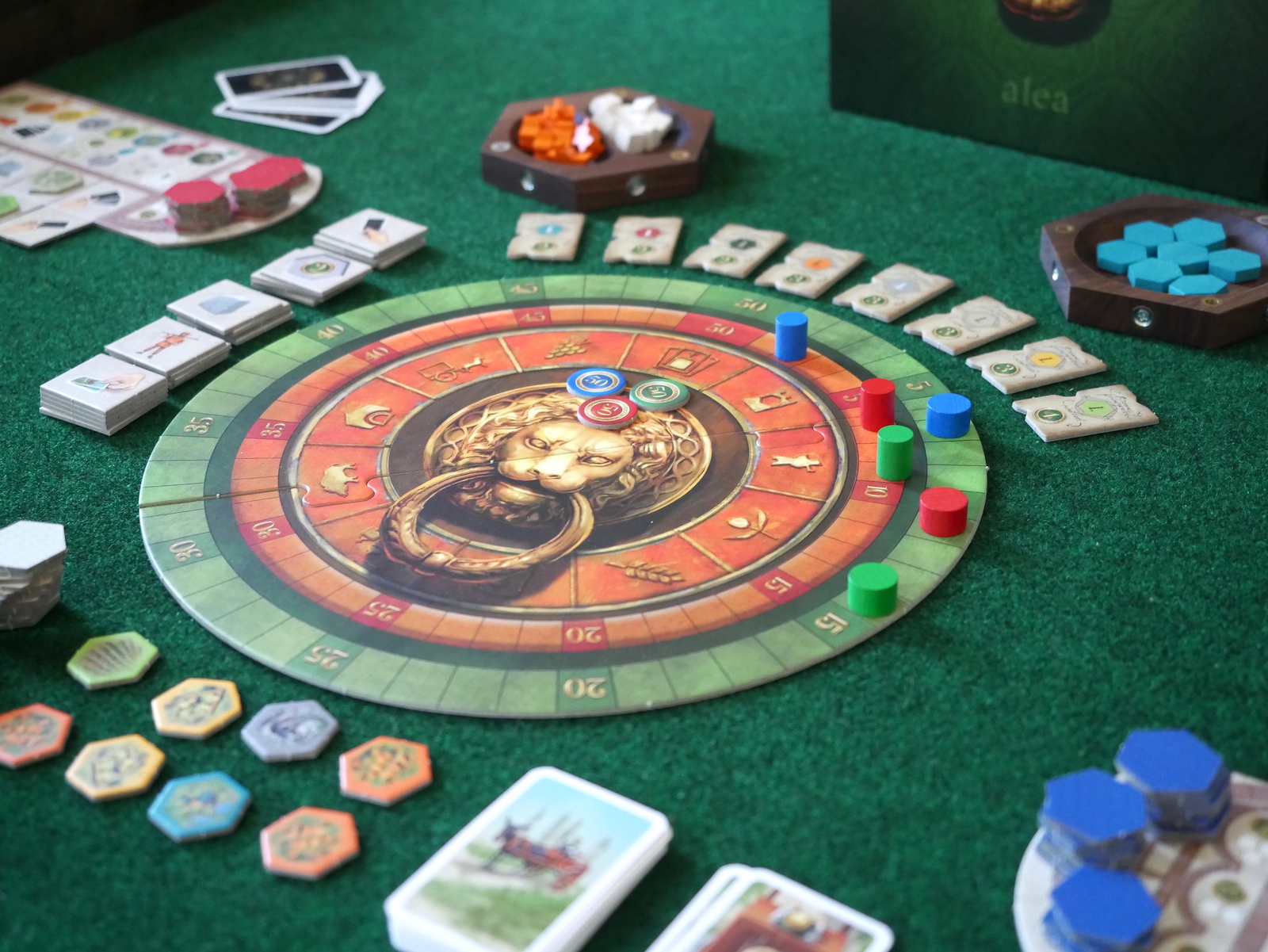 Now I get to make my dramatic reveal of how another mechanic that seems trivial makes Tuscany great. Since every player is racing to completely fill colors on their map, every game becomes a study in discovering which color is in the least demand so you can be the player to get that huge color completion bonus. But maybe you’ll duck into a race with the player on your left, because even if they’re a few placements ahead of you, since you’ll get the first pick of most newly revealed tiles, you can further your own progress while choking them out, and nobody was working on that other color anyways, so you can just get back to it after you’ve beat them. And that may seem like a great idea, but a few turns in, the player on your right could decide to do the same thing to you because they lost the race they were handily winning due to some well-timed extra action rewards from their opponent. Guess that first color was the best idea after all, better get back to that. I’m a huge fan of Knizia’s designs because of things like this, where what on its face seems like a pile of simple mechanics turns out to drive some really cool gameplay when you add some players into the mix, so I hope people understand the compliment that I’m paying Castles of Tuscany when I say it feels like one of his games.

Castles of Tuscany is a rare game that is simultaneously simple enough to be beloved by my family and complex enough to find its way into my bag for game club.

Nick grew up reading fantasy novels and board game rules for fun, so he accepted he was a dork at an early age. When he's not busy researching the intricacies of a hobby he'll never pick up, Nick can be caught attempting to either cook an edible meal or befriend local crows.
Related Articles: Castles of Tuscany, Tabletop
Share
Tweet
Share
Submit