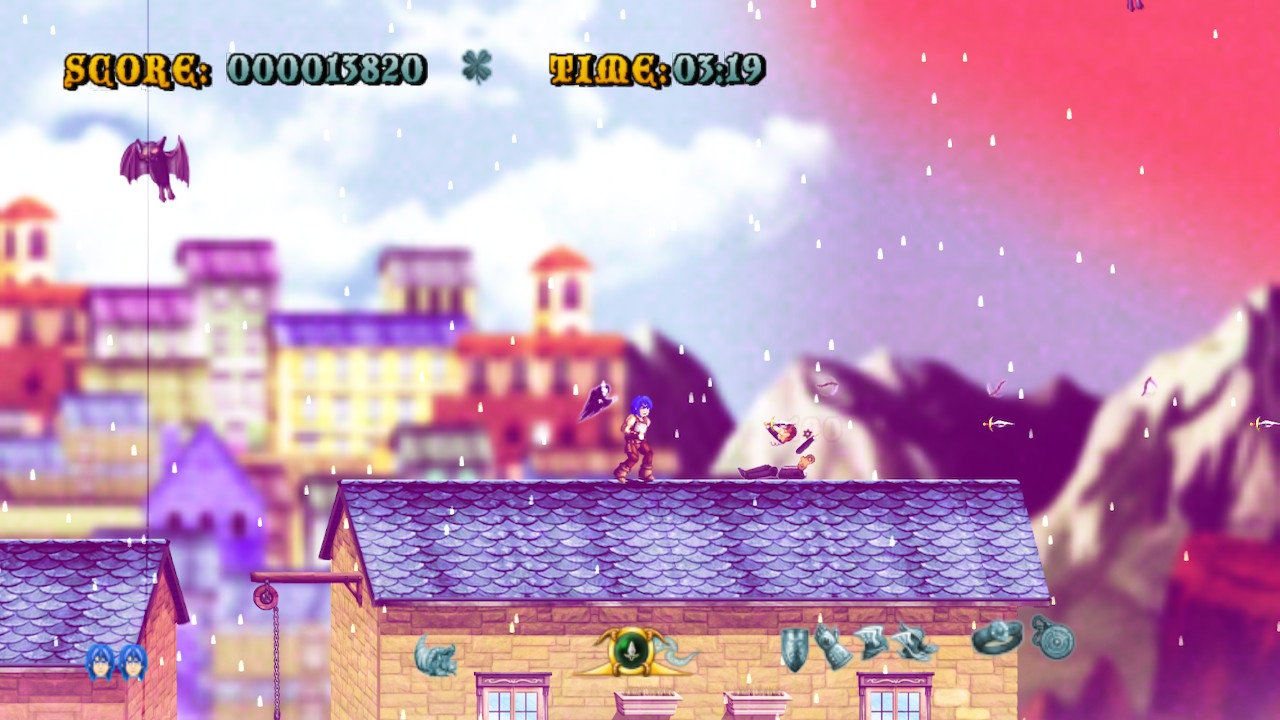 Sometimes life can take unexpected turns and we need to adjust. Having your baby stolen and getting killed as you try to save them is as rough as it gets. This is where a father begins his journey in Cast of the Seven Godsends.

Starting off, the story isn’t exactly the most polished or interesting, but that doesn’t really matter. It revolves around Kandar being revived after his baby had been stolen by an evil priest. During the boss fights, there is dialogue to fill you in on who characters are and explain what is happening, although it isn’t necessary in order to play or enjoy the game. The basics that you need to know are that Lord Adomon and the evil priest are trying to use your baby as a part of the rites to revive an evil being known as Zaraaima, and that you want to stop that as well as save your child.

The controls of the game are simple: attack, jump, and crouch. This simplistic layout, the graphics, and the soundtrack all aim to recreate the feeling of old 2D platformers, and does a pretty good job of achieving this. When attacking, you’ll end up rapidly mashing the attack button in order to pelt your enemies with damage, as this is the best way to take them down quickly and continue on your path.

The gameplay itself is pretty solid, and brings some nostalgia from some old school games. As you play, there will be small colorful orbs that you can break, which will have either a weapon or item inside them. The weapons actually change how your attack functions to a degree. Your attack is always ranged and involves you tossing whatever weapon you picked up last. All weapons have infinite ammo and fire as fast as you press the button. Some weapons fire straight ahead, while others launch at an angle. The downside to this is sometimes the angled weapons make defeating enemies in certain situations harder, but that just means that you need to find a good work around. As for the items, they are passive and have effects like increased protection, speed, attack, and so on.

In addition to the small colorful orbs, there are large ones as well. These orbs either have silver armor or the Godsend orb inside of them. If you’re currently without armor, the silver armor will be your prize, but if you already have that armor, then the Godsend orb is what you get. In your normal form, you’ll be able to take two hits before dying. After the first hit, a small grim reaper appears by your head that will fire mini scythes at your enemies while you attack. This is a nice touch to help you make a comeback while in a weakened state. The silver armor makes you tougher and adds another layer of protection before dropping to that weakened state. The Godsend orb grants you the ability to don one of seven different elemental armors.

After picking up the Godsend orb, you must hold down the attack button to activate it. Above your head, it will slowly cycle through seven different symbols, each representing a different armor. Releasing the button chooses whichever symbol is shown and you immediately don that armor. Your attack changes to that element, but interestingly enough, the weapon you have equipped still alters this attack. For example, if you have the fire armor, one weapon will cause you to lob fireballs, while another weapon will have you launch three fireballs at once. The Godsend forms also add the ability to use spells, which are affected by the equipped weapon as well. You only have one spell to use, but it changes based on the weapon being used and the form you are in. To use it, you hold down the attack button until a meter at the bottom fills. Spells can be extremely helpful and come in the form of a giant poisonous mushroom, a shadow creature that fires as you do, a blood tsunami, and a fire blast, just to name a few.

The Godsend forms are powerful and can take three hits before you lose it. Some enemies can be annoying to deal with, so you’re going to want to stay safe. Unfortunately, there are levels where enemies will keep spawning in and coming right for you. If you’re lined up right, you can take them down before they get close, but sometimes that isn’t an option. In one level, a dragon was constantly spawning and coming at me from below while I was in a place where I couldn’t dodge it without falling off a platform. This leads to some unfair hits and ruins some of the fun. The bosses are similarly annoying at times; some of them are easy to read and handle, while others move around seemingly randomly and give you little chance to avoid them. Case in point, the dragon boss was a pain to deal with. As with many of the regular fights, furiously mashing attack was the key to victory as I avoided damage the best that I could.

Just like many old school games, there are a limited number of continues. After dying a few times, you must use one of your credits in order to continue. In tandem with this, saving often is recommended. That way, you won’t have to go back too far if worse comes to worse. I ended up in situations where I died multiple times in succession, and used a few continues. Within the levels themselves, there are plenty of checkpoints, and I appreciate that. The game can be tough and having those checkpoints takes some of the pressure off. That being said, you’ll still be challenged as you make your way through the levels on your way to your baby. So call upon the Godsend power and defeat all that stand in your way.

Cast of the Seven Godsends

Cast of the Seven Godsends is a nice homage back to 2D arcade platformers. The story isn't that interesting, but the simplistic gameplay makes up for that. The varying attacks and Godsend abilities are fun, but without them, things can get rough.

Codi loves to play video games and watch movies. He will watch almost any kind of movie just to experience them. His ideas take inspiration from the shows and movies he watches, and games he plays. He also loves a good pun.
Related Articles: Cast of the Seven Godsends
Share
Tweet
Share
Submit