Some games have open worlds to explore, others have linear routes, and some let you make your own path. Agartha takes the phrase “carve your own path” very literally, since you jump into the role of one of eight adventurers as you dig through the world to reach the exit.

The goal of Agartha is simple: make your way to one of the exits in each of the various levels. I say one of the exits because many levels have multiples exits. The map in the top right marks the main exit, but there might be a secret exit that you need to seek out. You’ll definitely want to search for hidden exits because that’s the only way you can unlock some of the levels. The best way to determine where a hidden exit might be is based on the level select screen. For example, say there are two levels connected to your current one; one being below and one being to the right. The main exit leads to the right level, so that means a hidden exit must exist near the bottom of your current one. Comparing the stage’s layout to the select screen is very helpful for finding secrets.

The interesting thing is that Agartha isn’t just a platformer; you use weapons and skills to blast your way through parts of the stages. You’ll need to dig and blow apart ceilings, walls, and floors to beat a stage. Not every attack can destroy the landscape though. For example, the wizard’s fireballs, ice shards, and lightning bolts can’t destroy the landscape. He can only break rock, gravel, etc with his magic explosion. In addition to rocks and gravel, you’ll also need to navigate water, oil, lava, steam, and more. You can swim in water and oil, but if you stay under too long, your oxygen will deplete and you will die. Characters move a lot slower in oil than in water, so be careful. Lava is obviously painful, but steam functions just like air. You’ll also encounter enemies, and some levels are purely boss fights with giant enemies. 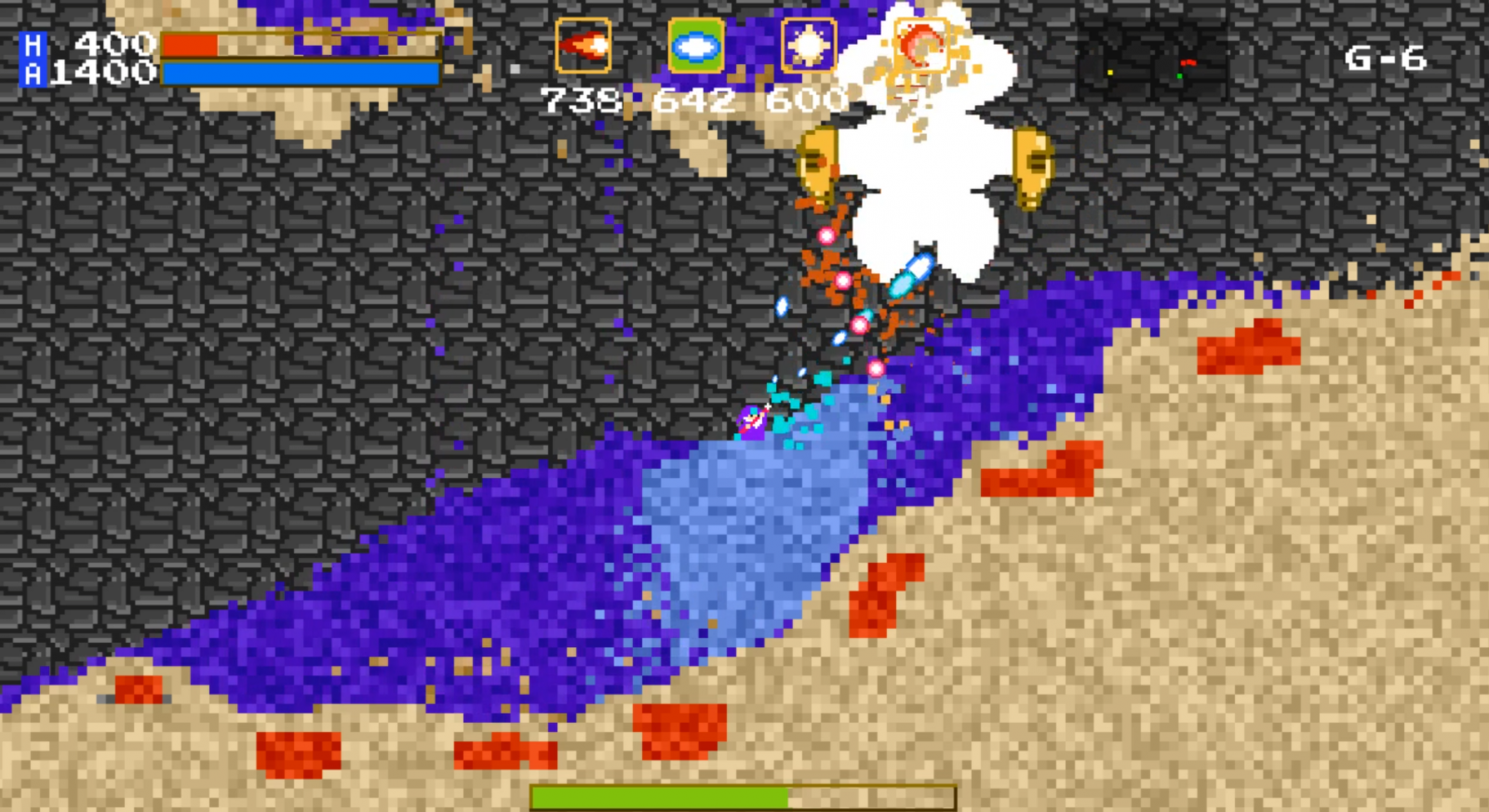 Starting off the game, you only have access to the gunner. As you play, you can collect meat and jewelry in order to buy other adventurers. When you kill enemies, there’s a chance that they’ll drop meat to pick up. Jewelry shows up on the map as blue dots scattered throughout the stage. On average, there’s about one or two jewelry chunks per stage. There are seven adventurers to buy, each with their own special cost. Some only require a certain amount of meat, others only require a certain amount of jewelry, and some need a fair amount of both.

Each adventurer has their own unique movesets, so some of them may be better equipped to traverse some levels compared to others. For example, the gunner uses a machine gun, fireballs, ice beams, and a bazooka. The alchemist shoots balls of energy that transform elements of the landscape into other elements. They can transform elements into water, rock, steam, and lava. Some attacks can actually alter the states of other elements if you expose them enough. Fire based moves can heat water into steam or change rock into lava, while cold moves can freeze water or turn steam into water. It’s pretty cool how you can affect the states of matter in that way. Every attack also have a limited amount of ammo. Once you’ve completely used all of the ammo of an attack, that attack is useless until you finish the stage. All moves refill their ammo at the start of each level, which is extremely helpful. This also means that you don’t have to be conservative about your moves as much. 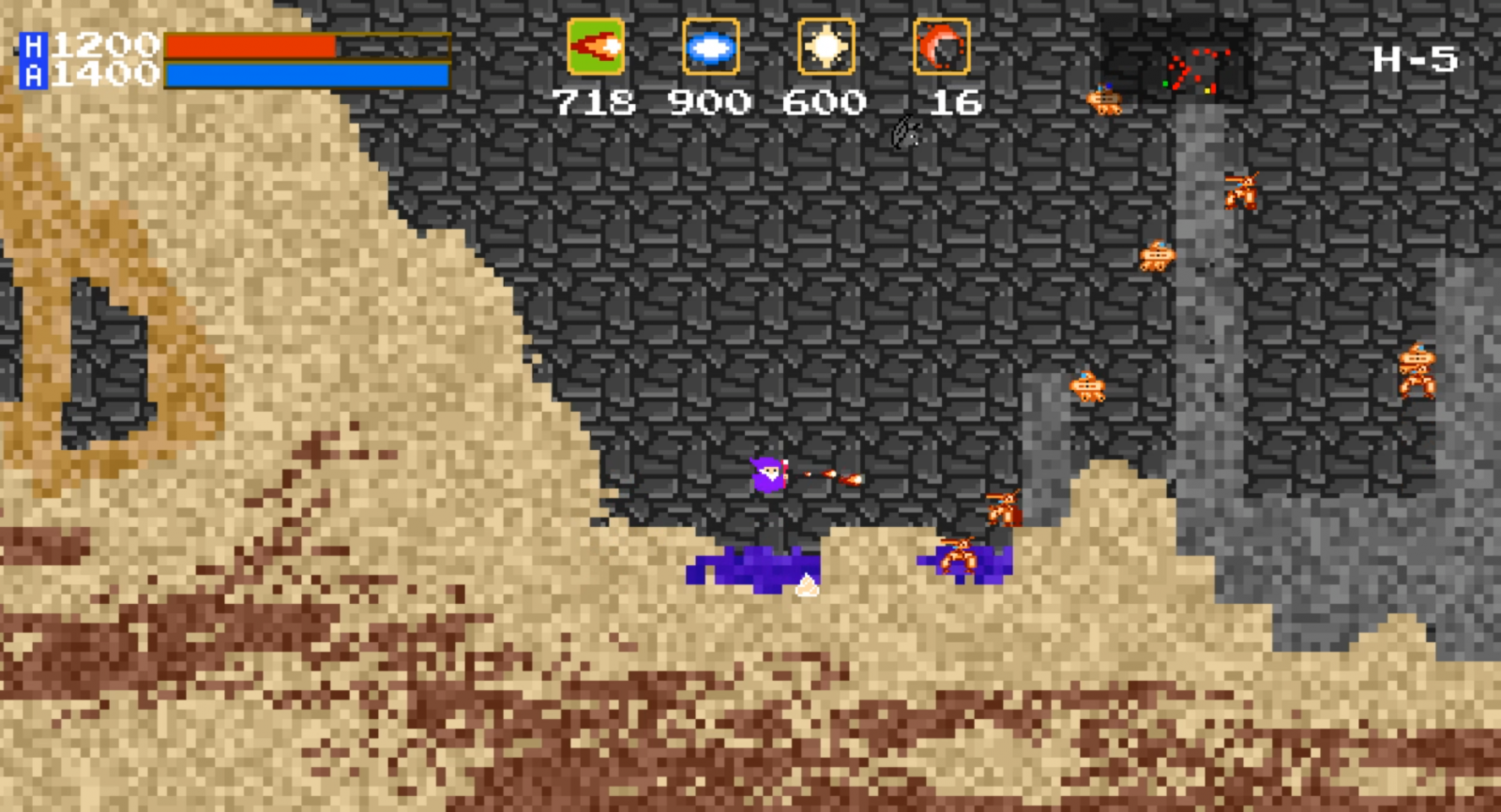 Agartha has a pixelated design, which brings up feelings of nostalgia and old school gaming. The levels and adventurers are colorful and charming. The gameplay is simple and easy to learn, although some levels can be challenging to complete. The mixture of linear and non-linear paths makes for some interesting gaming, especially if you can find the hidden exits without too much trouble. There are about 64 levels you can play through, but only if you find the correct paths and can overcome the obstacles. If you don’t play around too much, it doesn’t take too long to access and complete every level. Even so, you’ll still get plenty of enjoyment out of the stages. That being said, for the low price, I’d recommend Agartha for fans of platformers and pixelated games.

Agartha is a charming, pixelated platformer that relies on blasting your way through the environment. There are plenty of levels and extra paths to explore, although the game doesn't take too long to get through. Buying and playing multiple adventurers is recommended.

Codi loves to play video games and watch movies. He will watch almost any kind of movie just to experience them. His ideas take inspiration from the shows and movies he watches, and games he plays. He also loves a good pun.
Related Articles: Agartha
Share
Tweet
Share
Submit