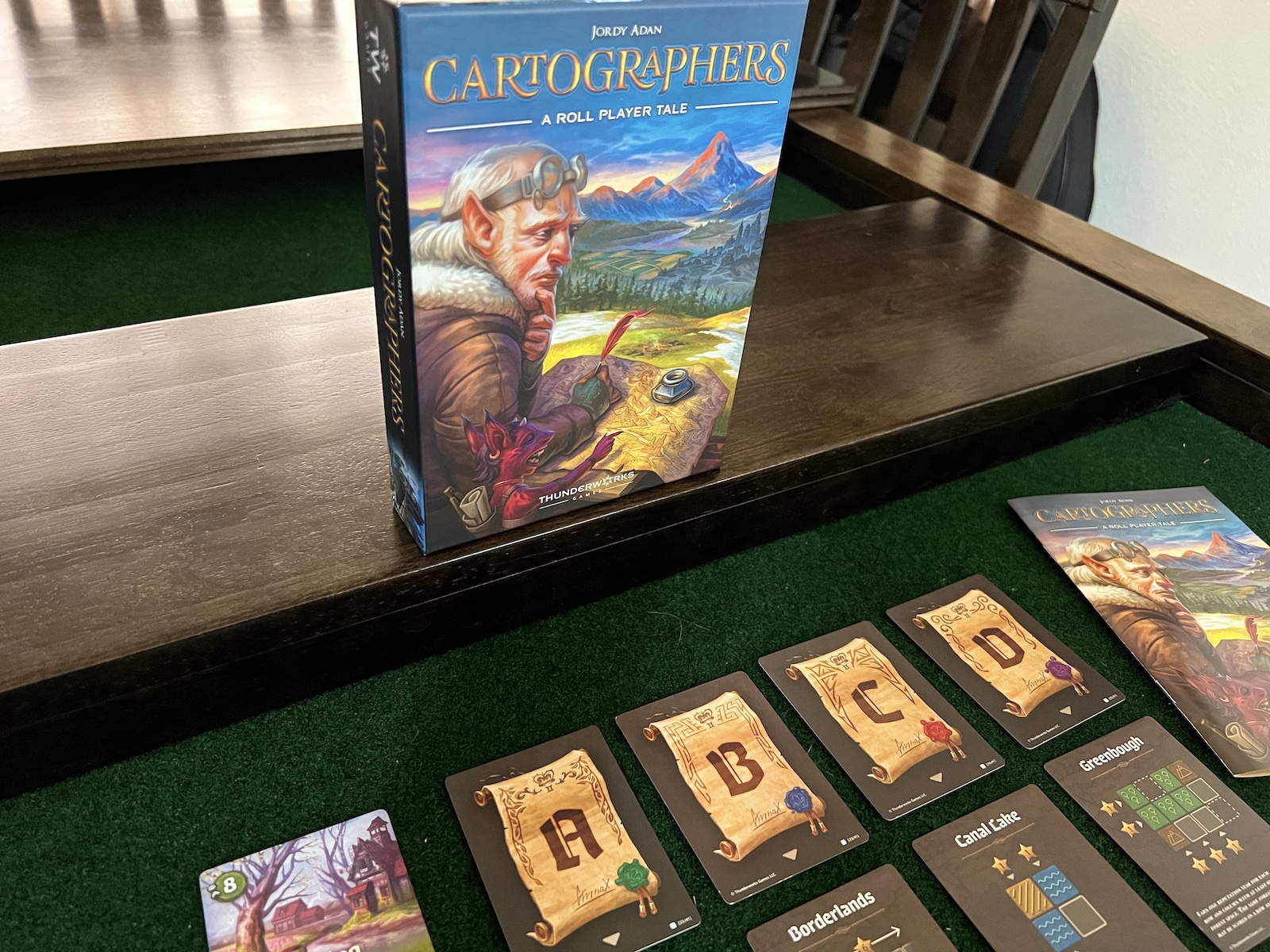 The more I game the more I come across unique, fun, and diverse game mechanisms. At one point I had no idea what a roll and write was and how fun it could be. At this point I have happened upon a plethora of roll and writes, mostly out of searching them out because they are fantastic. Between light components, small footprint boxes, easy to understand rules(for the most part), and minimal components within the boxes, roll and writes have become a stand out recently for a lot of gamers, myself included. 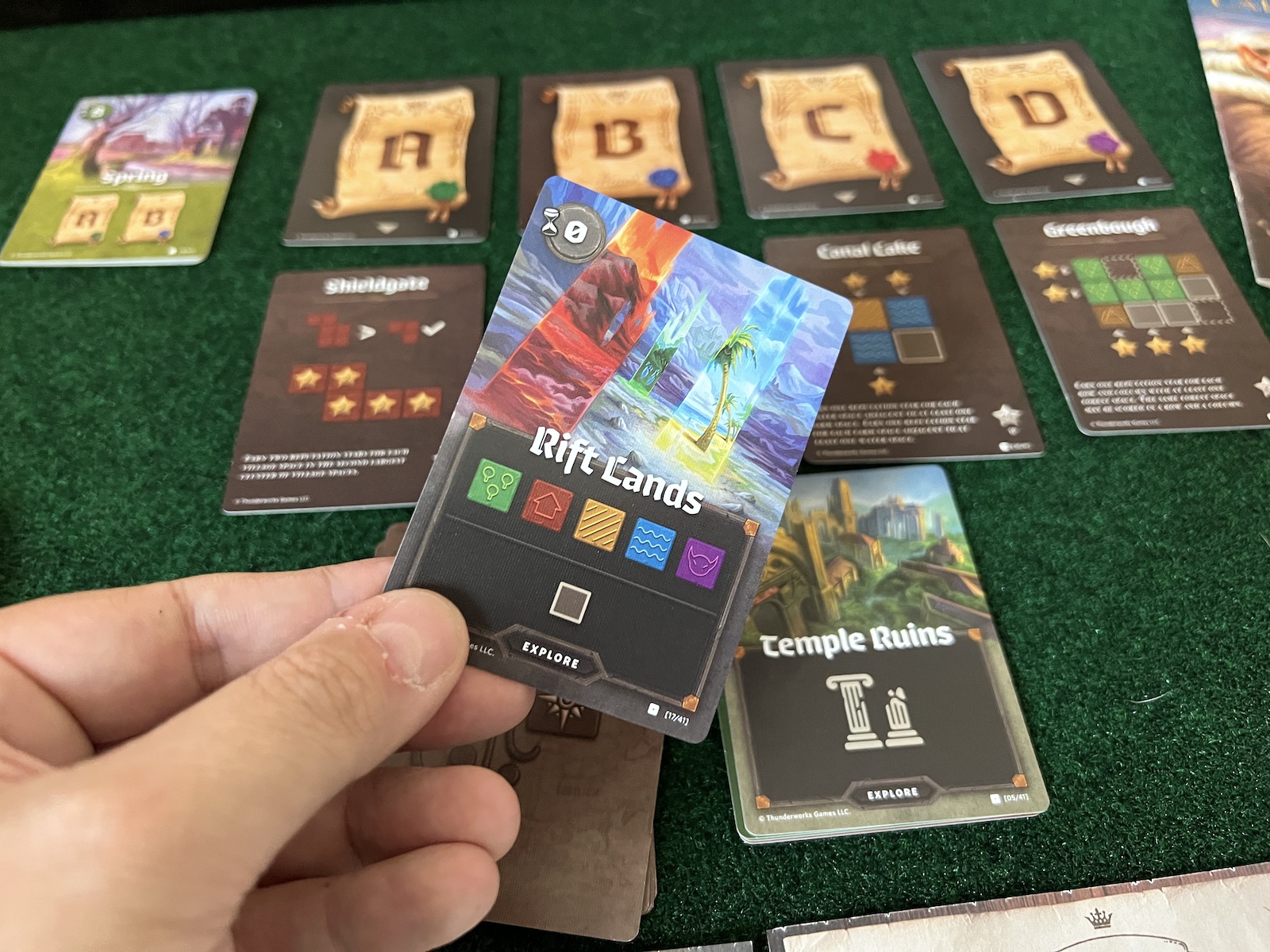 In a game of Cartographers, players are vying to be the best cartographer and score the most points by designing their map in the most efficient manner possible. First each player gets the same piece of paper that has two different maps on it with one on each side. Then players collectively choose which side to play on, one with a giant chasm in the middle, the other with a plethora of ruins and mountain spaces. After choosing their maps, players are now just about to set to play the game. With a pencil in hand, and the deck set up and ready to go, players will play through four rounds of the game.

In each round of Cartographers players will score two of four objectives, with each round scoring different objectives. For round one players score objectives A and B, while in the second round players score objectives B and C. This continues until in the final round scoring wraps around to score objectives D and A. During each round in order to score, players will flip over cards from the deck that contain polyomino shapes and one or two of the several terrain types that can be drawn onto the map. Players then choose which of the terrain and which polyomino shape they would like to add to their map and add it into whichever space it fits best. This continues until the current season(round) threshold number is met. In this case the year starts in Spring and continues through Winter. Spring and Summer both have a threshold of eight, while Fall has seven, and finally Winter with six. This matters as each card that is drawn from the deck has a value of zero, one or two, which tells you how many more cards the round may last. 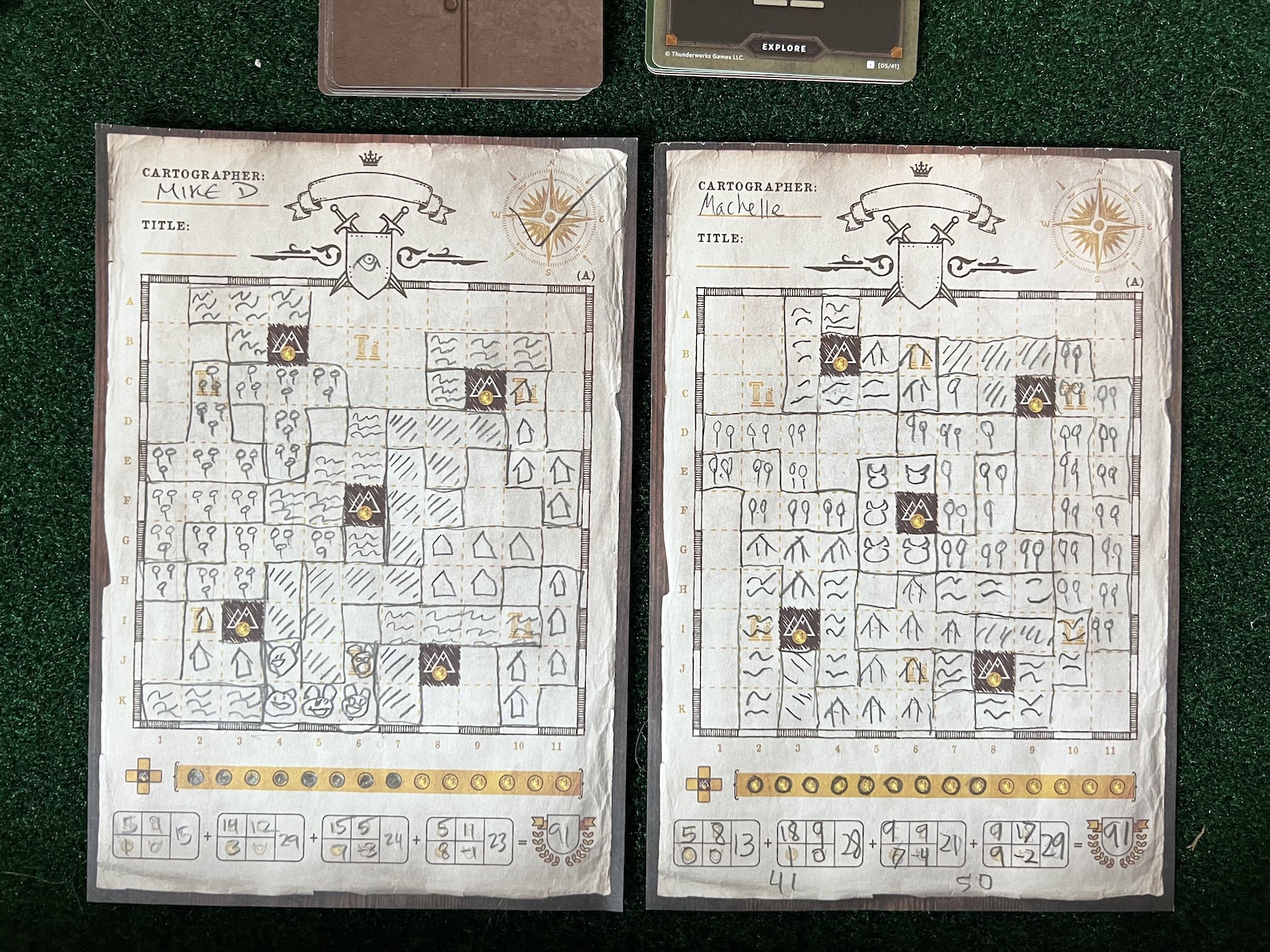 Every turn you draw a card, then draw your polyomino choice on the map, then add the card to the season card and move on to the next card. There are different places you definitely want to place different terrains to maximize your points and also different ways to sometimes mess with other cartographers. These come from the ambush cards which get added to the main deck, that when drawn forces players to pass their maps to the left and then their opponents that cards have passed to draw these spaces onto that player’s map. How they mess with other players is for each empty square around the ambush spaces players will get a negative point at the end of each round. So in essence the longer the player leaves those spaces open, the more negative points they will acquire .After the four seasons, players will finally add up all of their points, which come from scoring cards each round, coins, and negative points accrued from those pesky ambush cards. Once that happens, the player with the most points is the best cartographer. 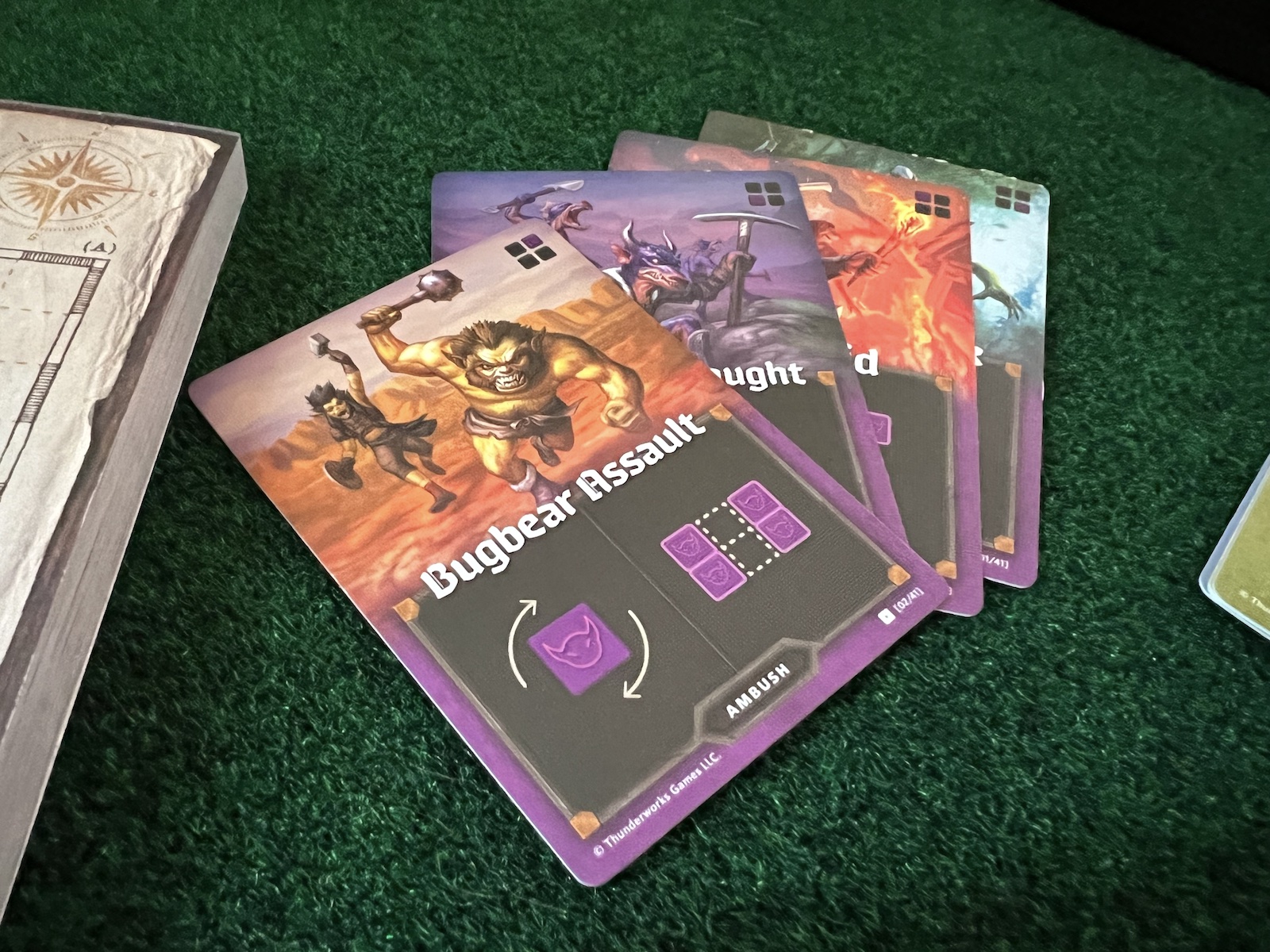 For me roll and writes stand out more when they provide a fun interaction but still contain the simultaneous play style they typically provide. Also depending on the mechanisms involved players(myself included) can just have an absolute blast playing them, even if they are very simple. Suffice it to say I love roll and writes especially when they provide a nice amount of depth with simple and straightforward rules. Many do that, and each one provides in itself a plethora of different options to choose from when playing games. Cartographers, while short, feels like a full gaming experience of many hours, boiled down into a much shorter time. 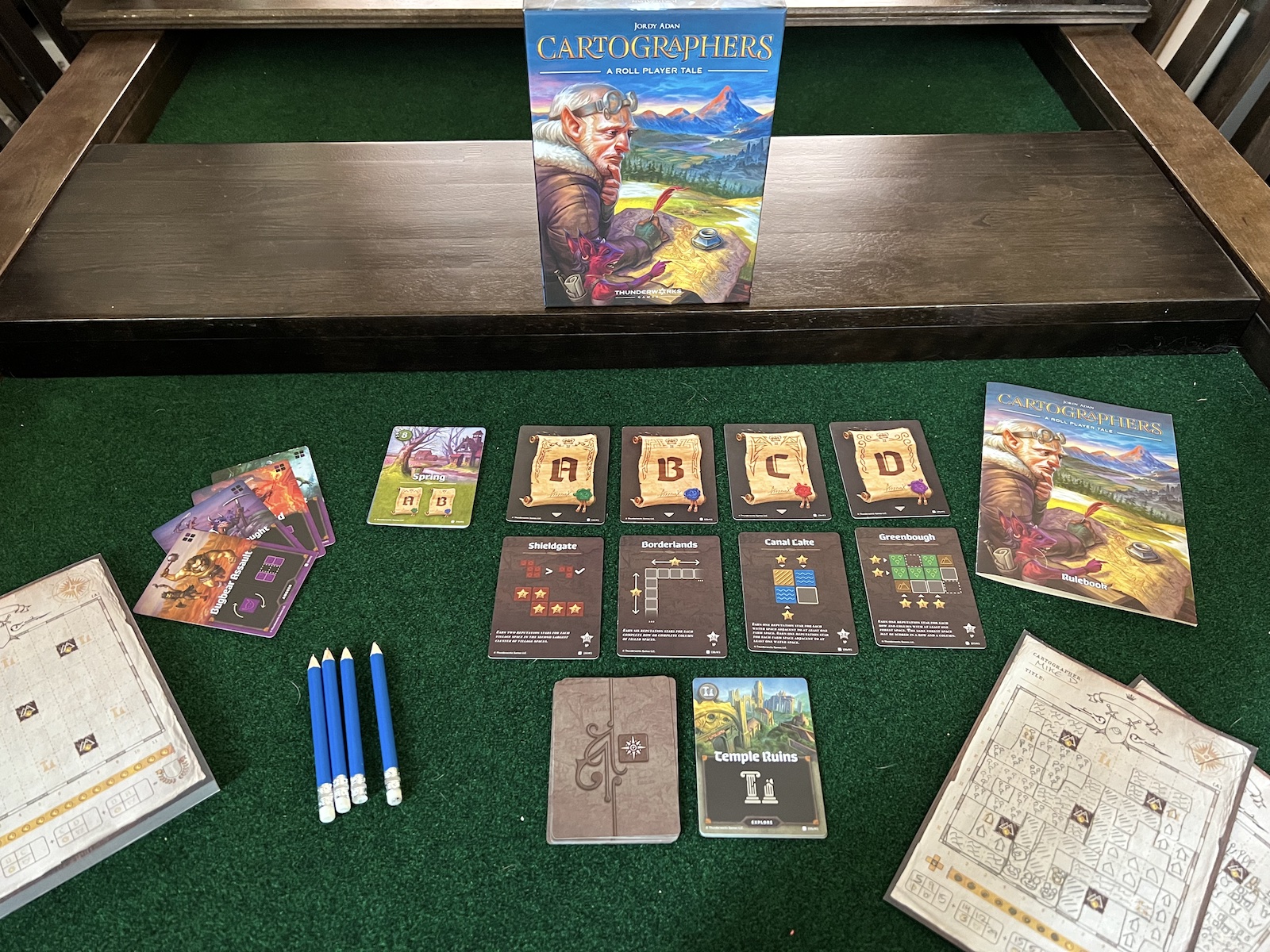 What makes it so much fun is the deck effects which terrains are available each game, which scoring cards are used in each game, the interaction with the ambush cards each game, and just drawing tons of silly representations of the terrain on your map because if I am being honest, drawing is not my forte. That being said, Cartographers could use some more cards to keep games feeling a bit more fresh, providing an asymmetrical aspect could go a long way as well, and color pencils would be way cooler than just drawing in with your own regular pencil.

All in all Cartographers is the best of both worlds, one part full gaming experience, one part minimal game. Between setup taking less than five minutes, and game play taking 30 minutes even the most casual of gamers can find something for themselves in a game of Cartographers. Simply put, Cartographers is a gift that keeps on giving.