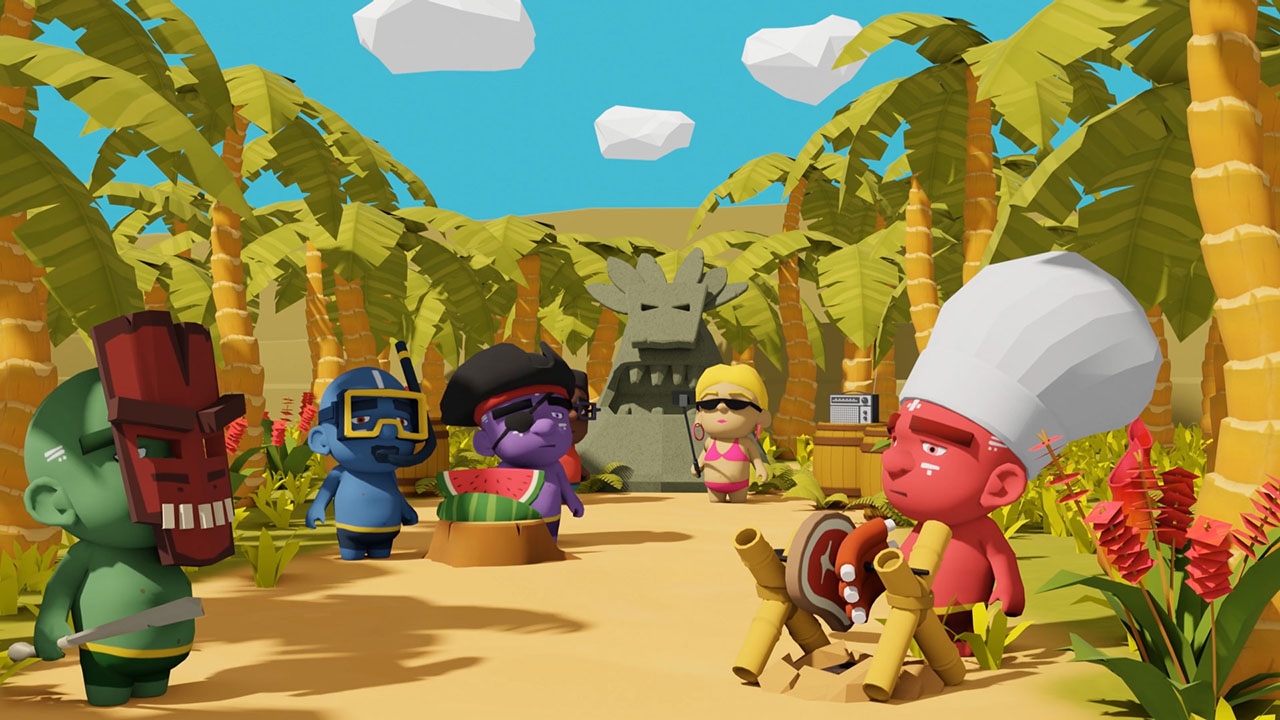 You’ve got the vegetables, the fire is going strong, you’ve paired it with a nice wedge of watermelon, but you’ve got no meat! We’ve all been there, am I right? Well, the god Hoochooboo ain’t gonna feed himself, and that means you’ve gotta source your meat locally. Maybe these tourists hanging around the island can help? Perhaps we should “axe” them and find out?

Cannibal Cuisine is a 1-4 player cooking game where your job is to keep the impatient god Hoochooboo well fed with delicious food like severed hands seasoned with citrus, human steaks paired with cooked eggplant, or I-don’t-think-that’s-beef ribs with a little bit of watermelon. Your cannibal crew serves as chef, server, and severer, as you need to hack up the wandering tourists for people proteins. Just like other cooking games, Hoochooboo will make specific demands, and a timer applies pressure to get it done before he gets upset. The tourists aren’t big fans of being hacked to bits, so they’ll try to kill you right back, and the veggies and fruit always seem to be all the way across the map with every manner of environmental hazards in the way.

Each segment of the game is set up the same way — five main levels, punctuated by a challenge level. They start off easy enough, asking you to serve simple dishes to a single Hoochooboo god. By the third level, you will be making more complex dishes (e.g. two sets of hands seasoned with a lovely citrus splash), and by the fourth you are serving two color-coded Hoochooboos, and likely facing some bizarre environmental craziness like your tourist-meat sailing by on a nearby boat.

The challenge levels aren’t about serving up meaty bits. Well, the first one is about hacking up meat, but not serving it. After that, you’ll be platforming over spike pits, dropping explosives on tourists as they pass by to stop them from stealing your precious fruit, and other fun bits I won’t ruin, but here’s a little taste:

There are a few balance issues and bugs nearer the end of the game. Sometimes the grabbing mechanic goes a little haywire, causing you to accidentally grab the wrong thing, or worse, ruin your meaty meal by accidentally double-stacking it. Hoochooboo are ServeSafe-certified gods, and will not tolerate you separating your tourist-kabobs once you put them together, so you’ll have to remake your skewer all over again. It adds some frustration to an otherwise fun game.

Cannibal Cuisine is an absolute blast with couch co-op. You can play with up to four local players, and like most cooperative games it only adds to the collective cannibal chaos. There is an online component that seemed to work well enough, but razzing your friends in person is so much more fun. The biggest hitch, however, is that when you have four people cooking, you are likely going to run afoul of a visual element. It’s frankly just too hard to see what you are carrying, and when four people are confused, dishes get burned or you end up frustrated with one another as you fail for no reason of your own.

To give the game a little bit of differentiation between players, there are a handful of customization options available, including hats, skin color, and choice of weapon, though those are entirely cosmetic. On the other hand, there are four powers to help you feed your angry island god. Planting a totem will help you heal anyone in the radius as the natives will knock your socks off if they get the chance. Fire breathing lets you cook your skewer faster, allowing you to stuff your Hoochooboo that much faster, or you can even cook a skewer on the ground in a pinch. Stomp does what you’d expect, stunning your walking meat selections in their tracks. Dash is incredibly useful, zipping your cook across dangerous gaps or just whipping away from dangerous island denizens when they get counter-stabby. When you work as a team, it’s helpful to mix and match, but some levels practically demand dash. We played one level more than half a dozen times without it and failed every time.

Cannibal Cuisine is a great little spin on the cooking genre, and it’s a blast with friends. While some UI and balance issues make for rough edges on the fun, the goofy and grisly nature make it a great addition for your cooperative craziness.

Ron Burke is the Editor in Chief for Gaming Trend. Currently living in Fort Worth, Texas, Ron is an old-school gamer who enjoys CRPGs, action/adventure, platformers, music games, and has recently gotten into tabletop gaming. Ron is also a fourth degree black belt, with a Master's rank in Matsumura Seito Shōrin-ryū, Moo Duk Kwan Tang Soo Do, Universal Tang Soo Do Alliance, and International Tang Soo Do Federation. He also holds ranks in several other styles in his search to be a well-rounded fighter. Ron has been married to Gaming Trend Editor, Laura Burke, for 21 years. They have three dogs - Pazuzu (Irish Terrier), Atë, and Calliope (both Australian Kelpie/Pit Bull mixes).
Related Articles: Cannibal Cuisine, Let's Play
Share
Tweet
Share
Submit