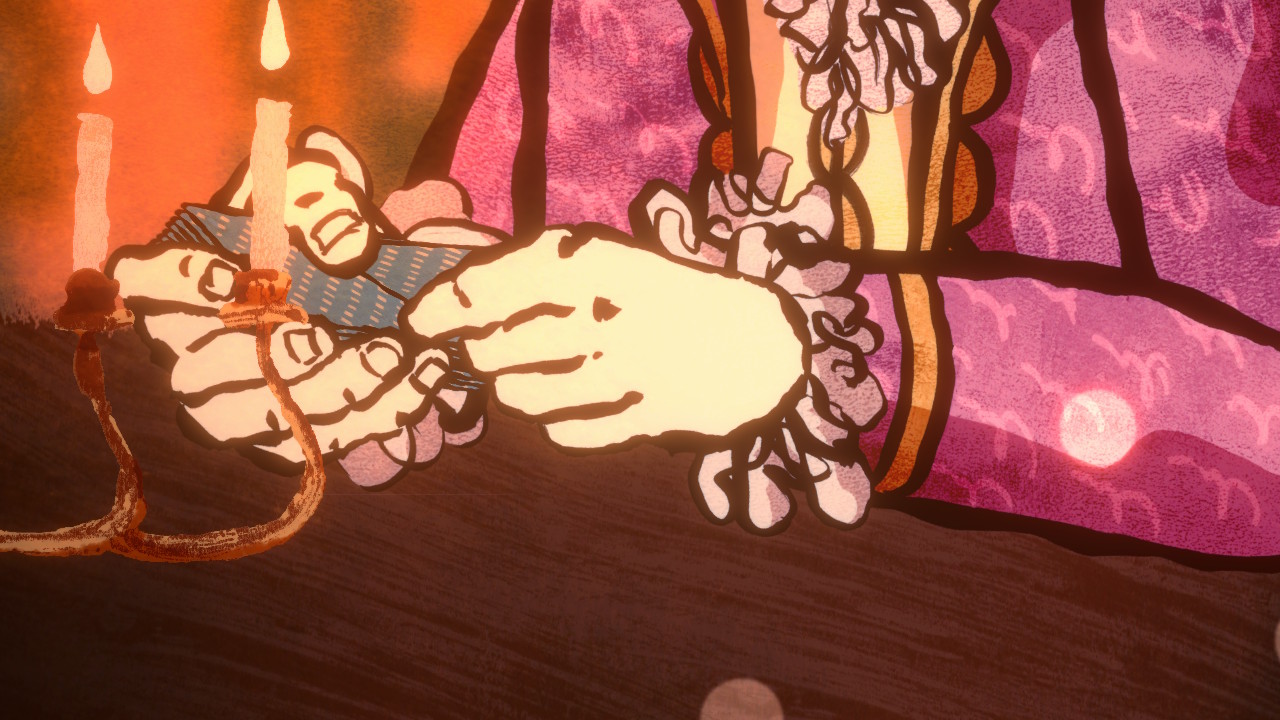 Playing card games may take some skill and a little bit of luck, but cheating at cards – well, that’s where the real challenge lies. In a small village in the south of France just before the revolution in the 18th century, a young, mute boy meets the Comte De Saint-Germain who invites him to help cheat a general at cards later that night. In a horrible twist of fate, the general discovers the ruse and accidentally shoots the boy’s caretaker. The Comte and the boy are now on the run, with the general blaming them for the murder, and the Comte takes the boy as his new apprentice as they travel all over France to lie and cheat their way to riches all while unraveling a royal conspiracy that may just spark a revolution.

Card Shark is part of a genre that we don’t often see in games outside of Assassin’s Creed: historical fiction. Yes, the Comte De Saint-Germain was actually a real person! He was something of an Alchemist, philosopher, and was even called “a man who does not die, and knows everything.” It’s not too much of a stretch to say he was a notorious cheat as well, and used some of his winnings to aid his Romani friends. He’ll be doing most of the actual playing in your journeys, while you gently guide him to victory by marking cards, cutting decks, shuffling, and even slipping in a few extra cards.

For each destination, the Comte will teach you a new technique you’ll use in that location. There are 24 in total, with some being more complex than others. On the simpler side is the False Riffle Shuffle – after picking out a hand of high value cards (only the Ace, King, Queen, and Jack really matter), you “shuffle” making sure to keep those cards on top when the deck is cut. Then, when putting them back together, you riffle your stack slightly slower than the other using the left stick to guarantee a good hand for the Comte. On the more complicated front is The Bent Dealer. As you play cards, you bend them when placing them down either inwards or outwards to mark low and high value cards. Then when dealing, you can give high value cards to the Comte and low value cards to his opponents by dealing from the top, sneakily skipping a card, or dealing from the bottom of the deck. You don’t have to be at the table to cheat either. In The Mirror and the Fan you catch a glimpse of an opponent’s hand by moving a hand mirror around, then communicate their highest set by opening your fan to a certain length and fanning yourself the number of times that set appears. The techniques only get more complicated as you progress, with the final levels even challenging you to improvise your own techniques.

Each technique is a lot of fun to master, and the controls for doing so likewise get more complicated. For the most part you’ll be using the right stick to shuffle, skim, etc. and the A button to select cards or perform other actions, but occasionally you’ll also use the rest of the face buttons mostly for quick time event things. It’s usually intuitive, but if you’re having trouble each tutorial allows you to practice as much as you want. I do think some of the explanations later on in the game were lackluster, but thankfully failing a stage isn’t too punishing. If you lose a bunch of money, you can easily make it back in the reappearing stage while also practicing more techniques. If you lose your life instead, Death is pretty easy to cheat too. 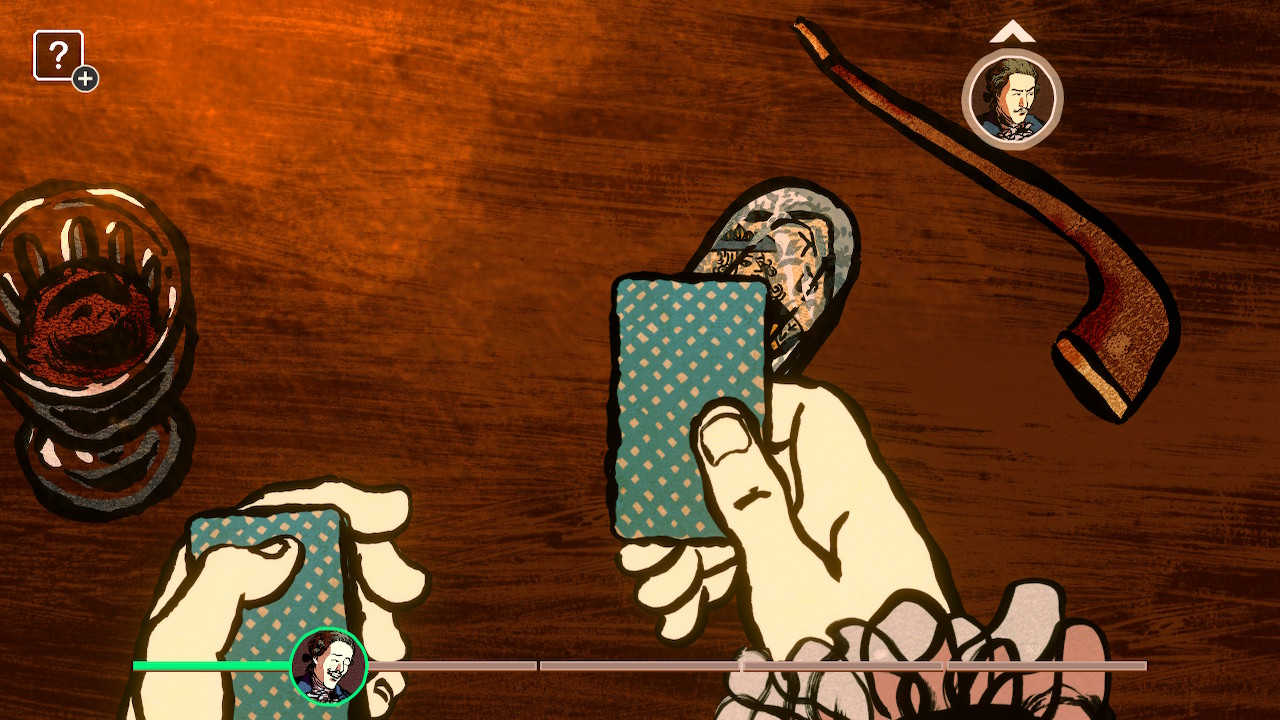 While you’re cheating, you have to make sure your opponents don’t catch you red handed – literally, in some cases. At the bottom of the screen you’ll see a suspicion meter, which constantly increases as you perform your tricks and even more if you make a mistake. If the meter fills up, you’re kicked out, or possibly worse, so you need to be fast and accurate. If the meter gets too high, it may even be worth intentionally losing a hand to decrease suspicion, if the sage allows a failure. You’ll also want to avoid raising the bet early on, but later in the match it will incur less suspicion so if you know you’re going to win the stage in the next hand it’s probably worth increasing the stakes to clean them out.

You may have noticed in these screenshots and videos that Card Shark is absolutely gorgeous, but these don’t really convey how nice it looks in person. The higher resolution on PC is a massive benefit, but as someone who recently purchased a Switch OLED model it’s hard to explain just how good this game looks on that screen. Sure it looks great on my launch Switch, but the colors are far more striking on an OLED. The use of color is phenomenal in general here, the Comte’s pink coat and your increasingly elaborate orange outfits makes the pair stand out among the more common blues, grays, and greens. This makes it easy to tell at a glance whose hands are doing what at the table, which is crucial when you need to act fast. The animations fit perfectly with the paper doll style as well. I have complained about puppet style animation in the past, but it works incredibly here because it feels like an intentional choice rather than a budgetary constraint much like the classical music used as the soundtrack.

If you were intrigued by that intro paragraph, you’ll be pleased to know that Card Shark is impeccably well written. You can instantly grasp what each character is about just from a few lines of dialogue; some people play against the Comte even though they know he’s a cheat because they’re here for a good time, while others remain oblivious and could have a hair trigger temper if they catch you. While the game features a mostly white male centric cast, because sexism was alive and well in the 18th century (still is today, but that’s neither here nor there), it’s nice to see some women take important roles in addition to people of color and at least one queer character.

Sadly the game does stumble here, especially near the end. I found some big revelations got lost in the shuffle (pun intended) as the game began to conclude. Some were foreshadowed well, especially in your character’s journal which you can check on the world map, which provides some nice character development for you, while others feel like they were introduced very suddenly. For example, about halfway through the game it makes a big deal about learning how to swordfight, but once you reach chapter 4 it’s essentially abandoned completely in favor of a linear set of card games. While I adored the ending sequence in Versaille, I found the final game and ending to be a bit lacking with only a short sequence showing your character and a few lines about others that change slightly based on what you did. Once you reach this ending slide, you also can’t go back to the world map to play more matches – it’s this single, one round game with one dead simple technique until you start over in one of the other files. While I wouldn’t say the ending lets down the story leading up to it, it’s still enjoyable for what it’s worth, I feel it should have been so much more.

Card Shark is unlike any game you’ve played before. As a card game where you don’t actually play cards, learning and executing various methods of cheating is a ton of fun. The historical setting contributes to the conspiracy central to the story, while adding its own colorful cast of enjoyable characters in the gorgeous setting of 18th century France.

David is the kind of person to wear his heart on his sleeve. He can find positives in anything, like this is a person who loved Star Fox Zero to death. You’ll see him playing all kinds of games: AAAs, Indies, game jam games, games of all genres, and writing about them! Here. On this website. When not writing or playing games, you can find David making music, games, or enjoying a good book. David’s favorite games include NieR: Automata, Mother 3, and Gravity Rush.
Related Articles: Card Shark, Indies
Share
Tweet
Share
Submit