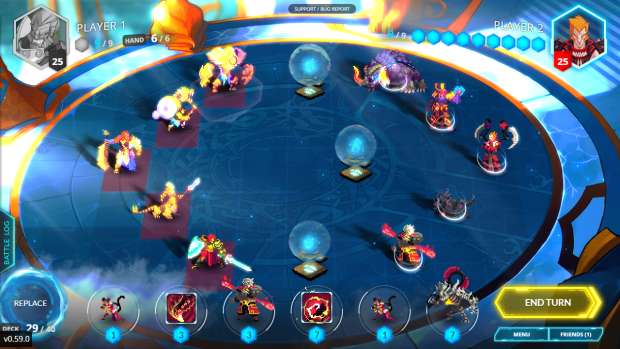 A tried and true method of battle is to line up two forces against each other. Sometimes this is handled by lining both sides up and each character going in order, the way several JRPGs handle it. Other times the forces are placed on some battleground made of squares or hexes and the two sides duke it out. Games like the Heroes of Might and Magic series, Yu-Gi-Oh: The Duelists of the Roses, and the board game Mage Wars Arena use systems where positioning of the characters matters in combat. Now Duelyst enters the fray with a deck-building mechanic added in.

In Duelyst, you play as one of six different factions. These factions are lead by a General, which is required to be in your 40-card deck. The decks are made up of Minions, Golems, Spells, and Artifacts. Minions and Golems compose the majority of the deck and have an attack and hit point value. Several of them have special abilities as well. These creatures represent the army to attack and defend for you. Spells are one-time use abilities that can cause direct damage or give any creature extra strength or hit points. Artifacts are similar to weapons or armor for the General, as they have temporary bonuses that last until they are damaged three times.

Each of the non-General cards have a casting cost ranging from zero to nine. As with most games of this type, the more a card costs the better it will be. Finding the right balance within your deck will be key. Having too many low-level minions and spells can give you a nice rush of small peons at the beginning of the game but can make it harder to defeat higher-level creatures. Having too many high level creatures can leave you unprotected in the early game.

The battlefield is composed of a five row by nine column square area. Each General starts on opposite ends of the field at their full strength. At the beginning of the game you start with five cards and can discard up to two of them. Starting with a bad hand is mitigated with this feature, so the “mana screw” encountered in Magic games won’t hold water. This can also be done at the start of your turn.

Summoning your cards is done through mana. Each turn you start with one additional mana than the previous turn. This simplifies the summoning process, making strategy the focus of Duelyst. Each turn you get up to two cards in your hand up to a hand of six. You can summon any cards as long as you have enough mana for them. Since you can cast several cards at the higher levels, getting two cards dealt to you gives you more options than if you were just given one and makes the game play faster.

During each turn you can move your creatures on the board and then attack. However, any Minions or Golems summoned during your turn can’t move or attack unless they have the Rush ability. All attacks are considered simultaneous, so both creatures attack at the same time. This encourages aggressiveness.

Did I mention that the game plays quickly? Each round takes maybe ten minutes, making it a nice diversion you can play a few rounds of to occupy some down time. Still, the underlying strategy is deeper than at face value. Duelyst starts with a practice mode that lets you play with the different factions, unlocking one at a time. You can also unlock cards by playing with each faction that can be used to create customized decks. A season ladder lets you play ranked matches to earn higher ranks and possibly win prizes in the game world. Solo challenges teach you mechanics while daily quests help you with strategy. Each one gives you gold pieces when you complete them. The Gauntlet has you draft cards for a deck and earn in-game rewards.

Spirit Orbs contain five cards, one of which is a rare card. You can purchase these with real money, as Duelyst is free to play, or with the gold pieces you can earn from what you play in the game. I never felt like it was that difficult to earn enough gold to get new orbs, so you might want to try earning your cards before pulling plastic out of your wallet.

Graphically Duelyst is a mix of gorgeous hand-drawn images used for the characters and settings outside of the matches. During the matches, the game looks a bit crude, as the sprite-based graphics look a bit rough. I actually appreciate this since the game has so many unique looking creatures and it doesn’t need a powerful system to run. However as I was playing, I really wished that I was playing this on my phone so that I could play it whenever I had a few spare moments away from the computer.

Duelyst felt more like a board game than a computer game with plenty of options and strategy. With new content daily, Counterplay Games has giving players a reason to log in on a regular basis. If you like forming armies and strategic gameplay, then Duelyst is definitely worth a look, especially as there is no cash commitment required. I do hope that they come out with a mobile version though, as that would be a great platform that would keep players like me able to log in more often and play.

While not working as a Database Administrator, Keith Schleicher has been associated with Gaming Trend since 2003. While his love of video games started with the Telestar Alpha (a pong console with four different games), he trule started playing video games when he received the ill-fated TI-99/4A. While the Speech Synthesizer seemed to be the height of gaming, eventually a 286 AT computer running at 8/12 Hz and a CGA monitor would be his outlet for a while. Eventually he’d graduate to 386, 486, Pentium, and Athlon systems, building some of those systems while doing some hardware reviews and attending Comdex. With the release of the Dreamcast that started his conversion to the console world. Since then he has acquired an NES, SNES, PS2, PS3, PSP, GBA-SP, DS, Xbox, Xbox 360, Xbox One S, Gamecube, Wii, Switch, and Oculus Quest 2. While not playing video games he enjoys bowling, reading, playing board games, listening to music, and watching movies and TV. He originally hails from Wisconsin but is now living in Michigan with his wife and sons.
Related Articles: Duelyst
Share
Tweet
Share
Submit