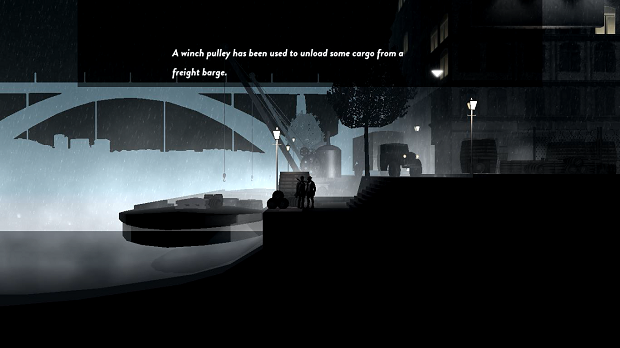 If you’re a fan of point-and-click games, but you also enjoy classic noir films, then Calvino Noir may already have you drooling a little.

In this sidescroller, you play as Wilt, a scrambler who takes on clients with operations that require stealth. While he is able to take down guards, this game is not about combat. It’s about slinking through the shadows toward each new objective, unraveling the mystery before you, and trying not to get caught.

When a fist icon appears above a guard’s head, it means that Wilt is in a position to take him down.

You receive your first assignment from Siska, which is teaming up with her hand-picked Mole to retrieve some sensitive documents. Once you have secured them, the Mole turns on you, knocking you out cold and hastily stealing the documents for himself. A page or two gets left behind, picturing diagrams of a nearby distillery. Sufficiently intrigued, you decide to go on a little mission of your own.

In each area, there are several hiding spots where guards can pass by and not detect you. If anyone notices your presence, unless you can somehow outrun them, it’s game over. They will shoot you and you’ll drop dead immediately; there’s no health bar to monitor in this game. You also cannot choose where to save the game; it only autosaves at checkpoints, which are typically completed objectives.

Though this is primarily a point-and-click game, there are a few controls. For example, W turns on your flashlight, and E switches between available characters, displaying their portrait and the skill they have.

As the story continues, you start to add characters to your party. You can link up the characters to travel in a group, but it’s smarter to switch between characters as you go. Each character has their own specialty, so switching characters allows you to tackle their quests and take on their permissions. It’s awfully handy to have someone around who can operate machinery or pick locks when you need it.

However, once you have more than just Wilt to manage, it starts to get difficult to coordinate everything. You have to be sure that everyone is well-hidden or moving stealthily at all times. If you leave someone behind who’s out in the open, they could be caught at any time, especially if you’re already making a ruckus elsewhere.

Some conversations sound pretty tense, like the wrong response will get you killed, but it seems to me that the story will still progress no matter what you say.

There are some light RPG elements in Calvino Noir, though picking the wrong response in conversation generally only has minimal consequences. It’s smarter to travel through the darkness, but if you dare to turn your flashlight on, you could find collectibles in dimly lit areas. These aren’t an in-game currency, just an extra challenge for those who are interested.

The ambience of this game is impeccable. The soundtrack is smooth and captivating, and the discolored world filled with 1930s architecture is fun to explore. It has been compared visually to This War of Mine numerous times, and though I can see the resemblance, there are enough differences that such a comparison isn’t too off-putting.

If you prefer to play point-and-clicks on a mobile device, you’re in luck! Calvino Noir is available in the app store and is compatible with the iPhone, iPad, and 6th generation iPod touch. It is also out on Steam and PlayStation 4.

The noir atmosphere is top notch, making it one of my favorite things about this game. The environment is more detailed than you might expect, and the mystery plot is fun to experience. Though some aspects of Calvino Noir can be frustrating or not as polished, overall it is worth the journey.

Sarah Marchant is an office admin for a nerdy t-shirt company. She has a soft spot for indie games, a passion for story-driven titles, and a weakness for cooking games and anything with zombies.
Related Articles: Calvino Noir
Share
Tweet
Share
Submit