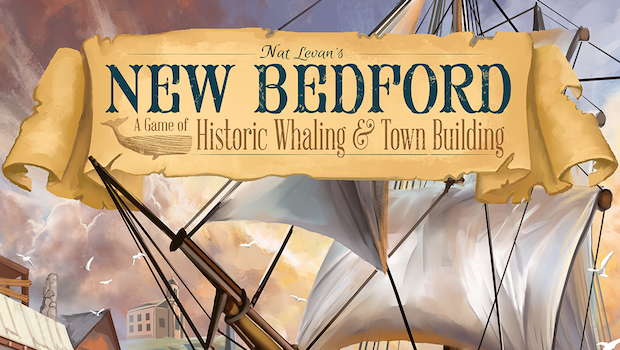 New Bedford is certainly not the first game to be released with an unconventional theme. Greater than Game’s release about eighteenth century whaling is no more unique than, say, Takenoko’s feeding of pandas or Rococo’s dress designing in Renaissance era France. As the former games show, unusual themes can make for successful games, and New Bedford does a solid job of joining the club.

You begin the game as one of up to four different whalers in the town of New Bedford, Massachusetts. You have five dollars which can used to buy any combination of wood, food, or brick you can afford while also keeping some of your precious coinage if you wish. At your disposal are a couple of workers and two sailing ships. A small board represents the town and it is populated by a smattering of buildings that your workers may go to to gather supplies or perform actions. All your workers, ships, and supplies are represented as fine wooden pieces and the board and subsequent buildings are wonderfully illustrated. Overall, the game has a nice, vintage feel to it.

Play begins with one of your workers going to either a building in town, the dockyard, or pier. In the early stages, most of your efforts will concentrate on the buildings in town. Each building provides unique supplies or actions. For example, the farm provides food, the forest provides wood, and the warehouse provides a little of all three supplies provided you can be the first to use it. The first player to use a location in a turn gets bonuses in every town location, and since the first player rotates with each turn, it can be a powerful bonus if you plan ahead properly.

Eventually, the town hall located in the center of the town will become important. Here, you can build new buildings to add to the town. There are several buildings to choose from that can generate more supplies, improve your position at sea, or combine multiple actions into one. Some simply add bonus points. Each costs a certain amount of wood and/or brick to build, which is the main use of those supplies in the game. Otherwise, they can be sold to keep your whaling business going.

Buildings can be purchased to expand New Bedford and add strategic options to each turn.

To win, you have to amass the most victory points by the end of the game. Buildings provide some points, with each new building adding one to your total. The bulk of your points will come from actual whaling, which involves two steps to get you out to sea. A worker placed at the dockyard will spend wood to prepare your ship for launch. Pier-placed workers allow you to launch of ship for its next whaling expedition. This is where your stocks of food come into play. The whaling board has six locations you can position your ship out to sea. The more food you use when setting sail, the farther out to sea your ship is placed. This is vital since the farthest ships not only stay out longer to catch whales, but they also get first pick on which whales they collect.

Once all workers have been placed, every whaling ship moves in one space, and whales are then caught. The game comes with tiles that depict right, bowhead, and sperm whales as well as open ocean. From a cloth bag, all the whale and ocean tiles are mixed up and drawn at random. You always draw one extra tile from the number of boats on the whaling board, so three ships would result in a draw of four tiles. Starting with the boat farthest from the dock, you select which whale you caught. Sperm whales, the rarest variety in the game, are worth the most victory points while the common right whales are the least. Should your turn come up and nothing remains but open ocean tiles, then your ship collects nothing on this turn.

While New Bedford has plenty of scoring options, it’s your returned whales that will ultimately determine your success.

Now you would assume that going far out to sea, collecting loads of expensive whales, and running away with a victory would limit this game’s appeal, but that would be a false assumption. Once your ship returns to dock laden with whales, you’ve got to pay the “lay”. Historically, this is the percentage of the profits that went to the crew. Those high point value whales you bring in also cost a high amount to bring to shore. Should you not have enough to pay for all your whales, you must sell them. This allows other players to buy them, essentially stealing your hard earned victory points. Capitalizing on a profitable haul takes careful planning. In my test games, the person with the most whales didn’t win every game, which is a credit to New Bedford’s balance.

The game can handle as few as two players but the more you can bring to the table, the better the game plays. Building choices become more limited, and whaling draws become more tense. As such, the base game can only handle four players, and alone that should have restricted replay value. However, a few options exist that take this game from good to great.

As a solo player, it’s disappointing to see many games having a bland solo variant that does little more than ask you to achieve an arbitrary high score. New Bedford has done an excellent job of providing a true solitaire experience. Included are four captains, each with a unique personality. Each captain has some standard orders to follow, but since a die is rolled to determine specific actions, you can never completely predict what the captain will do. It’s a neat addition to the game and one solo fans will enjoy.

New Bedford also released an expansion called Rising Tide. This adds a fifth player to the game as well as several new buildings. The buildings alone are a welcome addition to the base game, and assure that different buildings will show up with each play, adding some variety. Also, the buildings add some new choices such as adding victory points for collecting particular whales or providing multiple supply types in one location. Additionally, Rising Tide comes with a deck of Ship’s Log cards, divided into providence and omen types. During the whaling phase, you can choose one of these cards instead of choosing a whaling token. Providence cards provide you benefits, while omen cards can have negative effects on your opponents. The use of these cards is completely optional for those that would prefer to play a friendlier game.

The components are top notch, right down to the holes in the red bricks.

For an extra twenty dollars, the expansion is well worth the price for what it includes, though the total price both sets would round out to $60. It would have been nice to have had everything in one box, since the contents of the expansion can’t fit in New Bedford’s small original box, which is a mild annoyance.

Initially, New Bedford’s theme may be off-putting. After all, pandas and fancy dresses have fared far better in history than society’s outlook on whaling. For those squeamish about such a theme, the game handles it well. Whaling is not glorified, and the effect of whaling on the species’ population is evident in the game’s mechanics. It may never been endorsed by Greenpeace, but New Bedford approaches its controversial topic with due thoughtfulness.

New Bedford is an interesting game. The homage to its history is evident, and it handles its subject matter as delicately as it can. The worker placement mechanic works very well, though it shines better when more people play. You can certainly enjoy the game with just the original release, but the addition of the Rising Tide expansion turns New Bedford into an extremely addictive game.

Published by: Greater Than Games

Players: One to four (up to five with expansion)

You certainly should not dismiss New Bedford based on its quirky theme. It's a solid worker placement game that presents you with some challenging decisions. The expansion and solo rules really turn this into a gem.