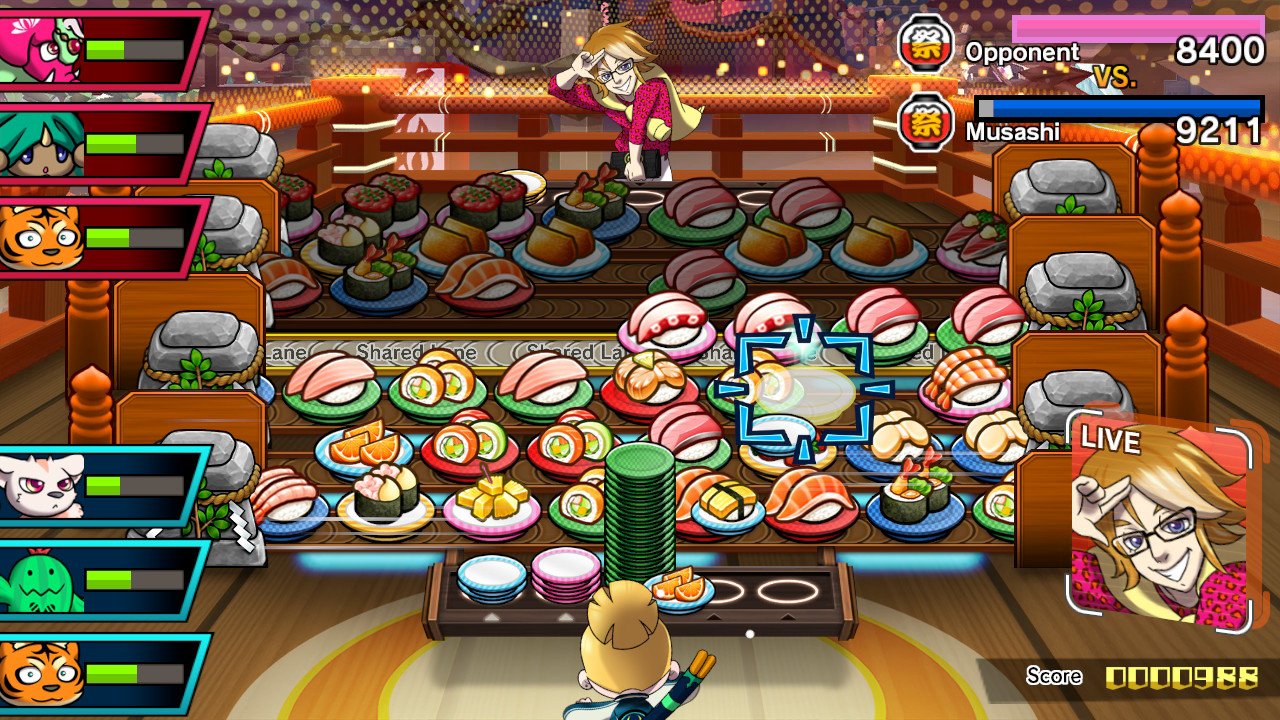 Nintendo has a way of making weird little puzzle titles that devour my time: Pocket Card Jockey was a 3DS title from two years back that I ate up, while 2015 brought a Puzzle and Dragons two-pack with a traditional campaign, and one themed around Mario and friends that I spent countless nights after graduation playing. Nintendo hopes to find that unexpected charm with Sushi Striker: The Way of Sushido for the Switch, and put simply, it’s a surprise action-puzzle game with a formidable amount of depth.

Brings a new meaning to the phrase “food fight!”

Sushi Striker: The Way of Sushido takes place in an alternate universe devoid of fish; regardless of the state of the aquatic ecosystem, sushi exists as a creation of sushi sprites (magical creatures that can be recruited ala Pokémon or Yo Kai Watch), and the ominous Empire aims to control all sushi consumption. It’s here where we control Musashi (who can be a boy or a girl; I chose the former in my playthrough), a young child whose parents were lost in the great sushi war.

After meeting Franklin, a mysterious mentor that changes Musashi’s mind on sushi and ends up captured after their first encounter, Musashi vows to avenge his parents and mentor and take on the empire. Early on in the game, he gets involved with the Sushi Liberation Front, a rebel force that wants to take back the control of sushi for everyone, and goes on a wild adventure with main sushi sprite Jinrai. The story is super silly, and there are times when the characters are oddly serious about sushi, but the story works for this type of game. It can get somewhat dark at times, and you might see the plot twists a million miles away, but the endearing and quirky characters are memorable and charming. It’s a brilliantly lighthearted tale that works for all ages, and the humor regarding the subject matter is entertaining.

Basically every millennial (myself included).

The main gameplay is deceptively simple yet highly unique and engaging. Both you and your opponent are facing each other with sushi moving constantly through conveyor belts, aiming to match same colored sushi plates. Once you link two plates together, a seven second timer will begin, and you’ll have to release your combo and eat before the time expires otherwise your sushi will be forfeited. Different colored plates signify different damage levels, so it’s important to check which plates you want before you start a combo. After a few combos, you’ll be able to hit your opponent by throwing stacks of plates either automatically or manually. This is your main form of attack, but you also have a different way to enhance your playstyle.

In addition to plating combos, you have sushi sprites at your disposal as you continue to eat, which can give you special abilities like a sushi shield, the ability to link plates that aren’t adjacent to each other, or HP recovery sweets. While the main mechanic is easy to grasp, you also have to contend with your opponent, who will try and attack you with their own sushi sprites and plate combos. In addition, some weapons are peppered in a shared lane, which can range from skill charging to freezing your opponents. The first person to decrease their opponent’s stamina to zero will win. It’s a relatively modest gameplay system with a surprising amount of depth.

You see, while you can breeze through earlier levels with quick combos, later ones will require you to strategize and be patient with your plate linking. Being hasty can cause light hits with your attacks, which can be detrimental when up against more resilient foes. Sometimes you’ll have to navigate away from other types of sushi and attacks. One notable boss battle in the early game prevented me from using salmon type sushi in my attacks, so I had to make sure to not include them in my combos. It’s these small things that make the action-puzzle gameplay cerebral rather than mindless, and I enjoyed thinking of different ways to play on the fly. You’ll also collect gears that you can equip that change how the sushi comes out, from a quicker output for veterans to one that speeds up AND slows down slowly, which allows for precise combos. Add equipped items and sushi sprites into the mix, and you have a ton of different methods to tackle different issues.

Other than the main gameplay stage, there are also some different RPG mechanics you can use within the game itself. There are three bonus stars in each level with conditions like “eat X or fewer plates and win” to “win in X or fewer seconds” as well as grades from D to S that will guarantee you will come back to try a level again once you finish it the first time. Your sushi sprites also level up according to your battle performance, of which you can bring three in battle, with up to two being in reserves; the latter can’t be used in battle, but will receive experience points. Like in Pokémon, you can change your party whenever you want, and they can evolve into greater forms with enough level ups. While I did like this RPG twist to the main game, I did find a lot of later levels to be unnecessarily grind-heavy (with some opposing sushi sprites having unfair advantages), and I needed to head to earlier levels again in order to increase my stamina to survive attacks. It’s tolerable here because of the aforementioned bonus stars and grades (which will unlock hidden stages that grant access to powerful sushi sprites), but there were times when I just wanted to continue in the story.

There’s much more to do aside from the main campaign, however. After a certain point in the game, you can participate in puzzle battles (where you have five moves and limited time to clear out a whole field of sushi plates), as well as a host of multiplayer modes. There’s local multiplayer options (either with full customization with a nearby Switch unit or with limited customization on the same console), and even online battles. These modes work fairly well, and I only saw some noticeable lag in a couple of matches that I participated in. You can do standard ranked battles or unranked chaos battles, which include items that are in the main campaign.

Korosensei didn’t teach me this!

Regarding the presentation, it’s unique and stylistically fitting for a game that has the main character who at one point shouts, “Sushi ruined my life!” which makes sense in context. The game utilizes 2D graphics and animation, and cutscenes feel akin to an episode of the Yo Kai Watch anime series. However, I did have a problem with the sound design for text scroll cutscenes; they’re all voiced, but only partially. This did cause an issue where I would expect a character to say the whole text box, but it ended at an abrupt part. I know that this was probably done to accommodate the 3DS’s lesser hardware, but I would have rather had voiced grunts instead of incomplete voice acting. It makes the voice acting a bit sloppy, which is a shame, because the performances are equal parts sincere and hammy. Overall, however, the art style and animation helps Sushi Striker stand out in the sea of uninspired and generic puzzle games.

Sushi Striker: The Way of Sushido

Sushi Striker: The Way of Sushido is a surprising action-puzzle game that is deep and enthralling, with a loveable cast of characters. This is the type of puzzle game that will have players hungry for more.

Elisha Deogracias is an aspiring accountant by day, freelance writer by night. Before writing for Gaming Trend, he had a small gig on the now defunct Examiner. When not being a third wheel with his best friends on dates or yearning for some closure on Pushing Daisies, he's busy catching up on shonen manga and wacky rhythm games. Mains R.O.B. in Smash. Still doesn't know if he's a kid or a squid.
Related Articles: Sushi Striker: The Way of Sushido
Share
Tweet
Share
Submit