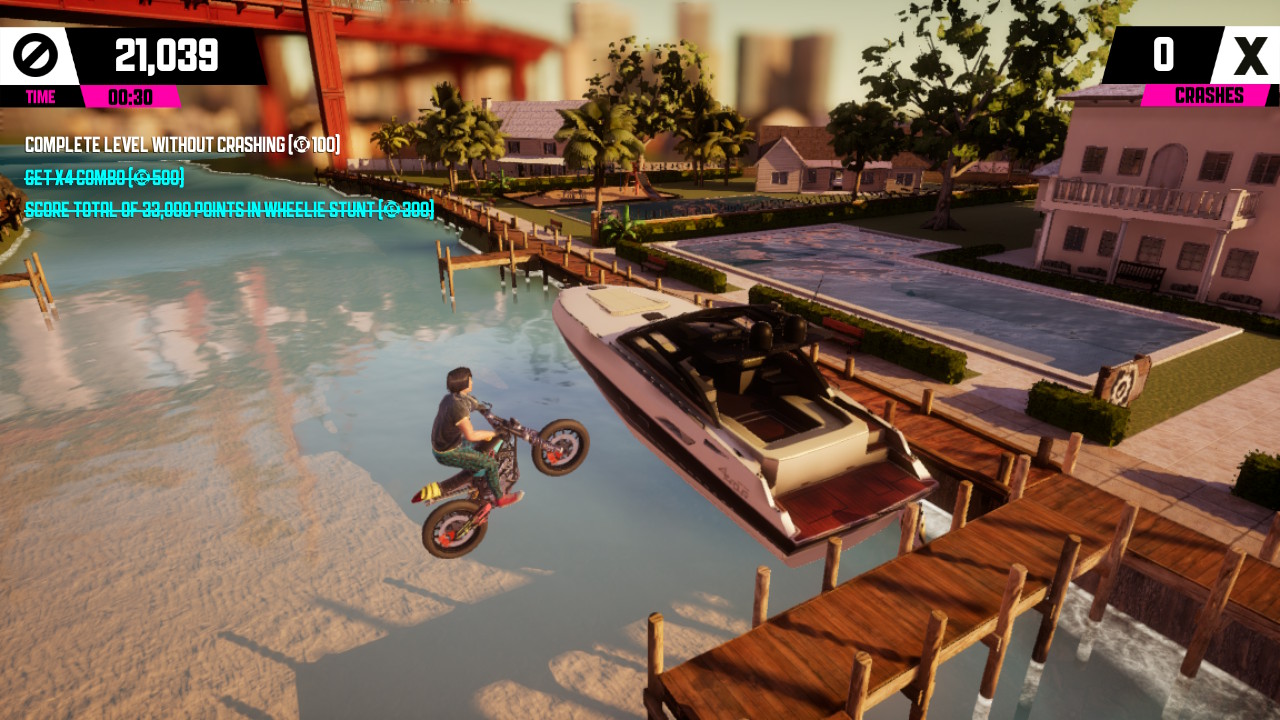 Get ready to hop on your dirt bike and blaze a trail as you speed through the sunny state of California. Make your way down the beach, ride through a park, and even pass through people’s backyards as you race towards the goal.

Urban Trial Playground focuses on the player racing from left to right in order to make it to the goal. Every level works this way, but there will be one of two other objectives to complete. In some levels, you’ll be timed and tasked with completing the level as fast as you can. Other levels are more score based; there is a designated score that you want to work towards. The score is built up by doing tricks and stunts as you’re going through the track. In both situations, after finishing the level, you are awarded between zero and five stars depending on how you did.

Doing better and getting more stars is important because there are star requirements in order to unlock later levels. Don’t worry, as it isn’t hard to rack up your star count, so you won’t be struggling to perfect levels so you can move on. In timed levels, just focus on speeding to the end, but on scored levels, work on getting some air and nailing some flips.

The levels themselves are wonderfully made, and the world around them is beautiful. There are a variety of locales throughout California that you will be biking in. You could be racing down a sunny beach, whipping through a neighborhood, speeding through the city, plowing through a park, or even taking risks on an airport runway. There are a total of 56 levels, with two of them being the tutorial stages. There are 28 different level designs, with almost all of them being used twice. Even with the repetition, that’s a good amount of unique stages available. The only downside is that it doesn’t take long to play through every level. With the $19.99 price tag, the few hours it may take to do everything may or may not be worth it, especially if you were thinking of plowing through dozens of hours of gameplay.

One fun aspect of most of the levels is the addition of challenges. Challenges are specified tasks to do during the level in order to earn chips. This could include finishing without crashing, doing a designated number of backflips, performing a certain trick combo, etc. Once completed, that challenge is marked as done forever. This is nice because it means that you can do the challenges in multiple playthroughs of a level rather than aiming to go through all of them in one go. There are also a few chips that can be collected on the track for some extra chips. These are used in the customize section on the main menu. You can buy upgrades to your bike, change its appearance a bit, and even alter your character’s look. There aren’t a lot of customization options, but I still found some things that interested me. You can even switch between a male or female character if you want as well.

The controls of the game are simple to learn and easy to use. It boils down to A for accelerate and moving the left stick left or right to lean forward or backward. Using ZL and ZR activates the rear and front brakes accordingly, which can be used to perform flips easier if done correctly or even tricks such as the stoppie. B is used to jump, while moving the left stick down causes you to duck. In order to perform a high jump, you’ll need to duck and then flick the stick up. This is especially helpful when launching off ramps. With some practice, you’ll be racing and rocketing through California like a pro.

Urban Trial Playground is a simple, yet enjoyable stunt show through various parts of California. The levels are well made and the scenery looks amazing. There's a good variety of levels, but they don't take that long to complete.

Codi loves to play video games and watch movies. He will watch almost any kind of movie just to experience them. His ideas take inspiration from the shows and movies he watches, and games he plays. He also loves a good pun.
Related Articles: Urban Trial Playground
Share
Tweet
Share
Submit