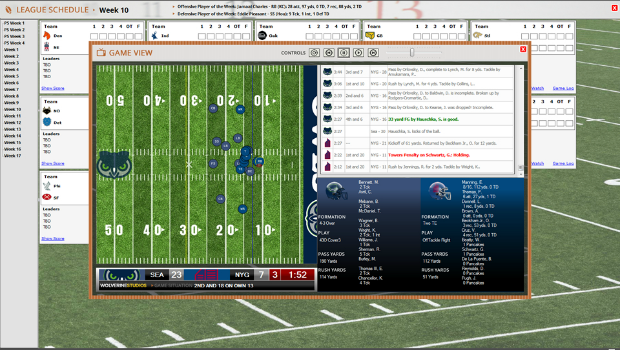 You’ve heard that saying “The only constant around here is change” in some capacity, and if you haven’t, welcome to the club. The reverse could be true of the sports simulator gaming world, one that always has new releases and entrances but always seems to look and feel the same.  Consistency is important when your product is more analytical than action based, and Draft Day Sports: Pro Football 2016 is the crystal example of game lacking in action.

For 99% of games on the market this would be a death knell, but for DDS: PF 2016, that is a cherry on top of what is the best American football simulator on the market.  While not having a glut of competitors to overcome, this is still a nice designation.  The game isn’t perfect and doesn’t hold up against the very best in the overall genre but gives American football fans the absolute cleanest and purest sim experience yet.

Simulators are pretty much all the same, but for those unaffiliated the game is designed to provide you with more of a numerical and strategic approach to the sport rather than the on-the-field action experience.  You play as the general manager of the team, choosing the players, drafting, setting up contract negotiations and salary levels, and making other executive level decisions regarding the team.  You also operate as the coach, meaning you’ll set the depth charts and final rosters, and you can also develop the gameplans for a season, or for game-to-game situations.

Other sports simulators give you some control with the games themselves, but DDS: PF 2016 opts to make those experiences fully simulated, so you can choose to watch the simulations or just skip them entirely.  The simulations play out on screen visually with little circles representing the players.  It isn’t pretty, but the movement of the “players” is animated accurately  you’d expect with real football, and accuracy is far more important here.

It’s on that point, accuracy, that this game really earns its keep. Having played a large number of these gaming simulators over the past few years, I can safely say that this game is one of the very best at providing the player with the ability to enact a plan and see the fruits of the labor.  The game gives you a blueprint to craft a team to your liking, and when you set the team up and run the simulations you can be confident you’ll not end up with a random amalgam of stats and outcomes.

For example, the first team setup I went with was a pass happy offense with a young and inexperienced offensive line.  I wanted my defense to be stingy in the red zone and to get takeaways, but I knew I’d have to settle for a bend but don’t break approach with the financial and talent limitations of team building.

I drafted players that fit into this playing style and ran through a season.  Without fail, I lead the league in passing stats, but also had one of the highest sack totals on the year.  My defense was a turnover creating machine with strong redzone presence, but gave up more yards per game than almost every other team in the league.  All of the season stats were well within realistic parameters for the season, across the board.

What that means is that you can actually run simulations on different styles of play and get accurate, realistic, and compelling numbers.  You can see how a team would start, play through a few seasons at their peak, and then see how the decline of a certain team style would play out over the last few years of a team’s core roster.  The numbers that you can get from these simulations actually represent something meaningful due to DDS: PF 2016’s ability to accurately determine how your team would play and succeed or fail based on your roster and gameplan input.

DDS: PF 2016 is a simulator much more focused on the numbers side of things than the presentation.  That is positive in many regards, because the focus should be there for a simulator and the basic layout that the game employs took little time and effort to craft.  The game does have a little bit of uncanny resemblance to the Out of the Park Baseball franchise with its primary layout.  The actual menus in the game are a little out of place, but once you get the hang of where the menus are, they are easy to navigate and make changes.

For players looking for a more “authentic” football league experience, or simply looking to share and explore other’s imaginative league setups, forums are available through the developer’s website where users can congregate and share.

Draft Day Sports: Pro Football 2016 isn’t a beautiful game, but like a desk calculator sitting idly on a business desk in 1978, it just works. The game gives players an ability to run simulations of teams with high levels of accuracy. American football is an underserved sport in the simulation gaming genre, and Draft Day Sports: Pro Football 2016 has a shot to become a “division leader” in the sports sim world.

Patrick Rost has been with Gaming Trend since 2013. At first focused on sports coverage, Patrick has gone on to cover a wide range of games and other products for the website. Outside of Gaming Trend, Patrick writes and records music, grinds perpetually in Elder Scrolls Online (PS4), and lives day to day with his two dogs, Bob and Stella.
Related Articles: Draft Day Sports: Pro Football 2016
Share
Tweet
Share
Submit