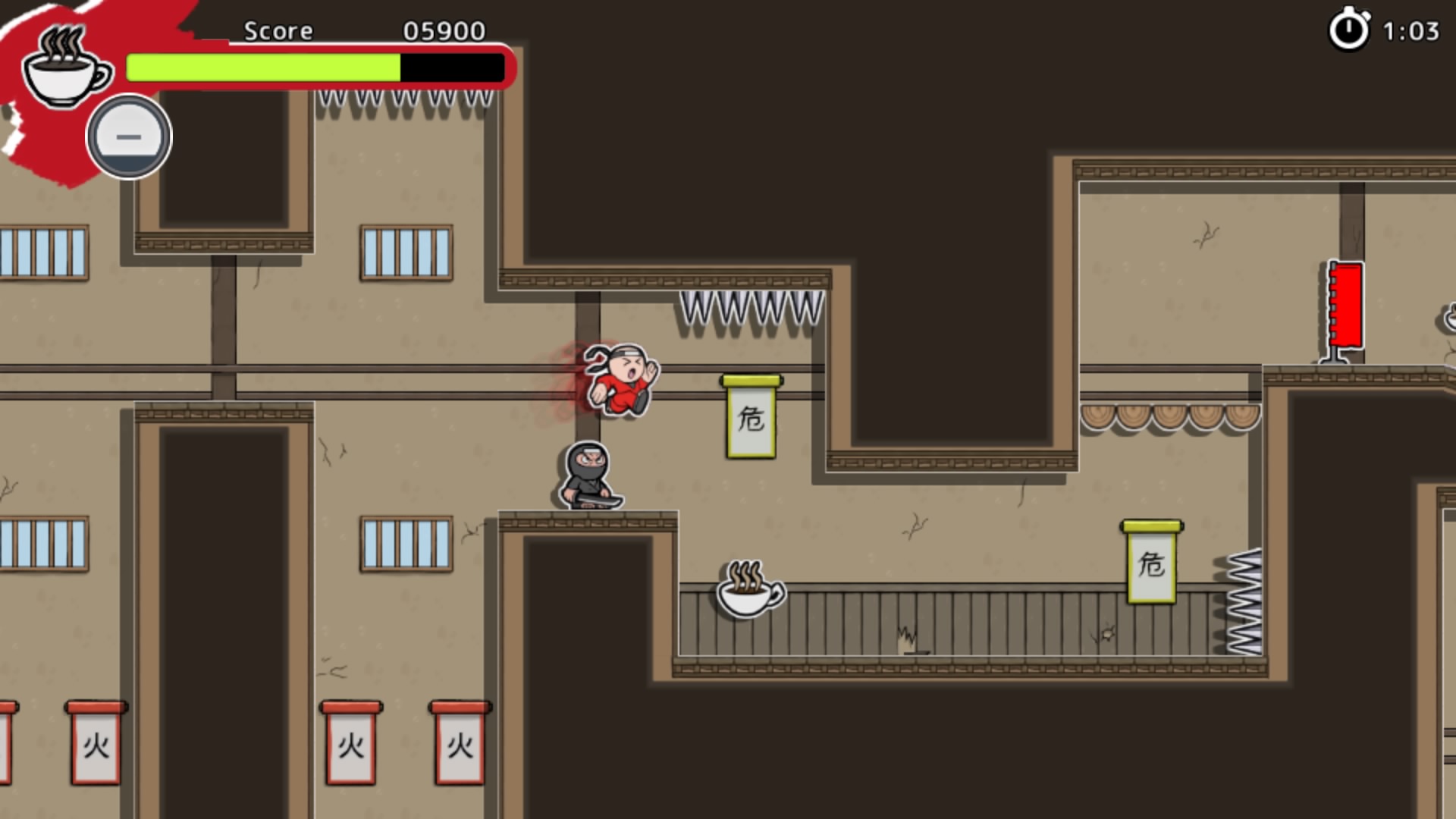 Have you ever heard “too much caffeine will make you bounce off the walls?” That’s not always a bad thing, in fact, it’s incredibly important in order to save the day in Super Hyperactive Ninja.

Super Hyperactive Ninja has a Super Meat Boy vibe to it, in both gameplay mechanics and difficulty. The goal of each level is to make it to the exit door by running, jumping, platforming, and making it past enemies. There is usually only one path to the door, but there are situations where you will run into multiple paths. Sometimes they lead to dead ends, and other times they get you closer to the door. Some levels even require you to do some puzzle solving of sorts in order to progress. This is an interesting aspect to add to the platforming, although you may overlook and miss things that you need to do. For example, one time I made it to the door, but found that it was blocked off. I didn’t realize that there was a switch I needed to hit earlier in order to open the path, so I had to backtrack so I could beat the level. It was a bit annoying having to go back, but I felt pride after completing my objective. I just wish they made tasks like that a bit more obvious in order to prevent possible backtracking.

The basics of the game come down to running and jumping. Holding down the jump button allows you to gain height, which is needed for some jumps. There are plenty of obstacles that will stand in your way, including enemies, fire, and spikes. There is no attack button, so you need to use Hyperactive mode to defeat them. Hyperactive mode is activated by holding down R2 and it causes you to constantly run in the direction that you are facing. If you hit a wall, you bounce off it and continue running in the opposite direction. In order to defeat enemies, you need to run into them while in this mode. Some enemies can be killed head on and from behind, some enemies can only be killed from behind, and others can’t be killed at all. Learning who you can kill with each method helps in the long run and reduces your deaths.

Hyperactive mode is also necessary in order to wall jump. You aren’t able to wall jump normally, which is kind of a letdown. At the same time, it adds an extra level of challenge and planning. Your character has an energy meter that slowly drains as you play. You must collect coffee that is scattered throughout the levels in order to refill that meter, and if you don’t, you fall asleep and get a game over. While in Hyperactive mode, this meter drains faster to reflect that your character is using way more energy. This means that you can’t constantly use Hyperactive mode and must budget your power accordingly. The balance between using this mode and keeping your caffeine meter up is just as important as platforming. In addition to this, after exiting Hyperactive mode, you go into a rest period before being able to move again. This leaves you vulnerable, so make sure you’re out of harm’s way first.

Even though Kohimaru is the hero, he isn’t the only character that you can play as. As you progress through the game, you’ll unlock more characters. Each character has their own stats, including strength, rest time, time to start dashing, and more. Taking this into account before starting a level can help you handle things easier. Each character has their own unique look and charm to them. If you aren’t worried about the stats, you may be tempted to choose your character based purely on their appearance.

Along with different stats, every character has their own specific item. Once the character is unlocked, their item is unlocked for purchase in the shop. There are three ways to obtain the items: you can find them laying around while playing levels, you can buy them at the shop, or you get three of whichever item originates from your character upon starting the level. For example, Kumo has pads that let you run on water for a short time, Yukiko has an ice breath, and Yaiba has a katana to slice through enemies. You must hold down the item button to continue using the items, but they have a short usage time, which is reflected by a green circle around your character that disappears. Every character can use every item available, which prevents the player from being forced to choose a certain character for specific levels.

After dashing your way through six levels, you’ll make your way to a boss fight. Typically, the boss fights encourage you to use the item that you’ve earned from the last boss fight. For example, after obtaining the camouflage blanket, the following boss becomes vulnerable to attack after tricking him with this tactic. Otherwise, it’s fairly difficult to get a hit in. Just like the regular levels, you need to use Hyperactive mode to damage the bosses, but you can only do damage from behind. It only takes three hits before the boss goes down, so it isn’t all that tough to win after you’ve figured out how to spot your opening. The boss fights are a nice change of pace from the rest of the game, and you feel a sense of pride from taking down your large foe.

As stated earlier, the difficulty feels similar to the Super Meat Boy kind of challenge. For those familiar with the game, you know this means that you’re in for a good challenge that requires strategy, precise timing, quick reflexes, and plenty of patience. Unless you nail every move on the first try, you will die a lot. In a game like this, it’s part of the experience, although it can be frustrating. Some sections can be irritatingly difficult and make you want to take a short break; I can vouch for that first-hand. Once you get past a part that you’re having trouble with, that sense of accomplishment rushes over you and pushes you forward. Having checkpoints scattered throughout the levels helps an incredible amount as well. In the end, Super Hyperactive Ninja is a fun, challenging, and patience testing game that I recommend for anyone looking for a tough platforming experience.

Super Hyperactive Ninja fits in the realm of Super Meat Boy-style platformers, but has its own touches added in. Having to keep an eye on the caffeine meter while balancing the use of Hyperactive mode forces you to think strategically. The challenging nature can be fun and frustrating, but it's worth the time.

Codi loves to play video games and watch movies. He will watch almost any kind of movie just to experience them. His ideas take inspiration from the shows and movies he watches, and games he plays. He also loves a good pun.
Related Articles: Super Hyperactive Ninja
Share
Tweet
Share
Submit