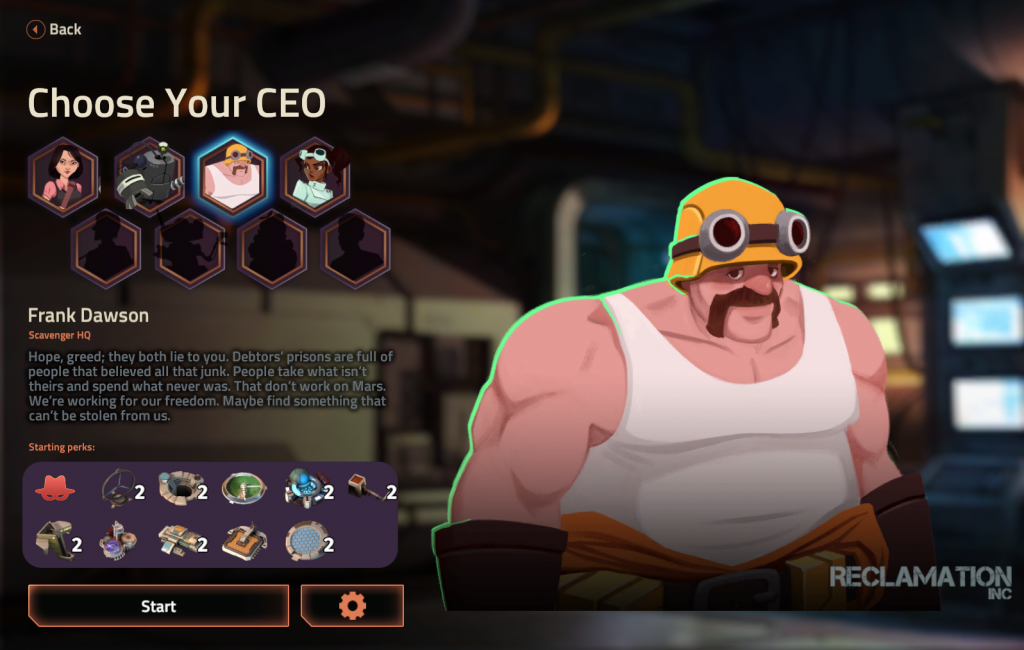 Imagine a real-time strategy game where micromanaging the location and movement of your military assets is a non-issue, partly because there are no military assets involved. A game where you have tech-trees to advance through and resources to gather, yet doing so isn’t merely a means to another end, but the whole point of the game. Most importantly, imagine this being beautifully executed in a polished gaming package that manages to innovate and thrill with a keen sense of balance. If all this is getting you on the edge of your seat with a tell-me-more look in your eyes, then let me introduce you to your new addiction: Offworld Trading Company by Mohawk Games.

Let me give you the fast facts on this one. Offworld Trading Company – hereafter OTC – takes place in the semi-distant future, after humanity’s started to crawl back from making a hellhole out of good ol’ planet Earth. But advancements in technology have made it possible for corporations and settlements alike to head to Mars and start anew. But this brave new world won’t be settled without giving the earthlings some enticement, and as has been so common throughout history, it turns out nothing provides encouragement like the prospect of turning a profit. This is the setting of OTC, and for a genre that typically has a razor thin story at best, it’s a backdrop the title manages to deliver smoothly. Granted, it’s not a story that will matter all that much outside of the tutorial mode, but for a cynical guy who normally blows through cut-scenes as soon as possible, I found myself appreciating the touch of character infused into the game by the background story.

That story, by the way, was largely delivered to me via the tutorial, and here I want to emphasize: Mohawk Games made it absurdly easy, even fun, to learn the fundamentals of OTC. All the innovation in the world won’t matter for most people if the game containing it is a pain to learn. With OTC, this isn’t a problem. In no time at all I found myself not just learning the controls, methods and goals of the game, but doing so in a way that was actually a pleasure, not a mere learning experience. Each of the several tutorial missions focused on a distinct aspect of gameplay, delivering the lessons from coworkers at newly established Martian startups, teaching me the ins and outs of gathering materials, building factories, researching new technology and more. All of it was delivered with a cheerful, cartoony theme and a bit of tongue-in-cheek humor. The game’s artists and writers deserve some applause, because it was handled in a way that will ensure more people stick around for the main event.

And that main event? No-holds-barred, not-always-legal corporate slugfests playing out on the surface of Mars. Capitalism in space! To give the most basic rundown: OTC starts off with you scanning around the surface of mars, figuring out where all the tasty resources happen to be. There are several materials to be on the lookout for, from lowly yet essential water to silicon and aluminum. These materials can be used to manufacture various goods – water is needed for food, while iron is needed for steel. Some of these more advanced products may be used to procure upgrades to your HQ, which in turn allows more land to be claimed and structures to be built. Most importantly, all of these goods can be traded on the open market, with their value being dictated by relative supply. As more of any given good is sold on the market, the price of that good is driven down little by little. Dump a ton of goods on the market and don’t be surprised if it’s selling for next to nothing – whether you or your competitor are making the sale. Ultimately, the goal is to be the last corporation left standing – which can be accomplished by buying out all of your competitors, making them your subsidiaries. No military invasions of your opponent’s territory! In the end, you’re all part of the same corporate family! Sounds peaceful, right?

Of course it’s not. In addition to trying to buy/manufacture low and sell high, OTC provides a variety of ways to skew things in favor of your corporate interests. You can build a hacking array which will mess with Mars’ market, fooling purchasers into believing a given commodity is suddenly more abundant or scarce than it really is, with appropriate fluctuations in price soon following. Or maybe you’ll use some underworld connections to provoke a labor strike at your opponent’s factories, killing their productivity for a while. If all of this is too subtle for you, don’t worry: when all else fails, you can buy some black market dynamite and just straight-up explode one of your enemy’s facilities altogether. With these and other acts of corporate espionage, the goal isn’t to just wipe your opponent off the face of the planet. It’s to strategically target their production/supply chains, crippling their output and allowing you to economically claw your way ahead of them, taking advantage of their setbacks to reap more of the profits for yourself.

I know this looks complicated, but let me assure you that actually, yeah, it is in fact quite complicated.

Alongside corporate subterfuge is also strategic thinking. As mentioned, the martian landscape is dotted with a variety of resources, most of which can come in various levels of density. Since land rights are limited, it’s crucial to figure out which resources you’re going to harvest. Do you choose the nearby silicon mine which is a bit shallow, or the somewhat more distant but much denser mine? Early on, location matters, and not just because a greater distance to travel cuts into your profits. Building several facilities of a compatible type right next to each other increases their efficiency, which means you may end up with a very distant – yet efficient – cluster of resource harvesters. Beyond the importance of location, there’s the ability to upgrade the efficiency with which a particular resource is mined, allowing a corporation to further specialize in one of the handful of products or resources available. There’s patents to invest in, requiring a particular resource (chemicals) to unlock, but which provide powerful, targeted boosts to a particular aspect of industry on a first-come-first-served basis. And there are structures which can be purchased, ranging from the Pleasure Dome which yields a constant steady income (Mars needs entertainment!) to the Offworld Market, which allows timed exports of goods to asteroid miners willing to pay top dollar for Martian commodities.

Does this sound deep and complicated enough? Too bad, there’s more. On top of all the aforementioned variety, there’s also four different types of HQ buildings to choose at the start of the game. Each of these buildings offers a particular emphasis, with its own skew of advantages and disadvantages. The scientific HQ privileges research and efficiency above all else, allowing some manufacturing facilities to be build right on top of its desired resource. Why build a water pump to transport water to your farm when you can just build your farm on the water, and save yourself the trip (as well as the extra land rights.) Or there’s the robotic HQ, automated to the point where requirements like ‘food’ and ‘water’ are obviated, at the cost of a greater emphasis on the far more difficult to manufacture ‘electronics’. Each of these HQs seemed balanced, with none of them locked to a singular method for success. Considering how deep this game is, the fact that it even feels relatively fair – in spite of the complexity – is an indication of brilliant design.

Not to be confused with the Dawwwww crater, the most adorable crater in the galaxy!

Graphically, OTC is stellar. The art is simple, yet fluid – watching buildings slowly unfold once they’ve been slated for creation is a pleasure itself, smooth as silk. The music and sound effects are serviceable, with the audio-visual package doing a good job of being pleasant, serving to buttress the fun of the game itself. And all of this complexity comes with a good amount of actual ‘game’. There’s a single-player campaign mode which allows the success of your business to play out over multiple ventures. There’s a skirmish mode for those interested in shorter bursts of play, and an online multiplayer for people looking for competition with actual human beings. Suffice to say, if you’re into the game itself, there’s a few ways to play it – and considering this title is published by Stardock, I have faith in its reasonably long-term support prospects.

The fact is, Offworld Trading Company is a dramatic success in the RTS genre. It manages to innovate in a field that often feels stagnant, and it does so with a package that is polished and welcoming, making it easy for newbies and jaded gamers alike to get into. At $39.99 USD on Steam (temporarily marked down to $29.99 as of this writing), it’s a must-have for anyone seeking out a new and exciting challenge with a strategic edge to it. Grab your start-up money and head skyward, ladies and gentlemen: martian riches are waiting for you.

Offworld Trading Company combines economic strategy with innovation and polish, resulting in a game which feels exciting, deep and fun all at once. Not an easy combination to pull off - the developers should be proud, and gamers should be delighted.

Victor Grunn has been a gamer since the days of single-button joysticks and the Atari 800XL. When not lamenting the loss of the Ultima series or setting people on fire in Team Fortress 2, he's an aspiring indie game developer and freelance writer.
Related Articles: Offworld Trading Company
Share
Tweet
Share
Submit