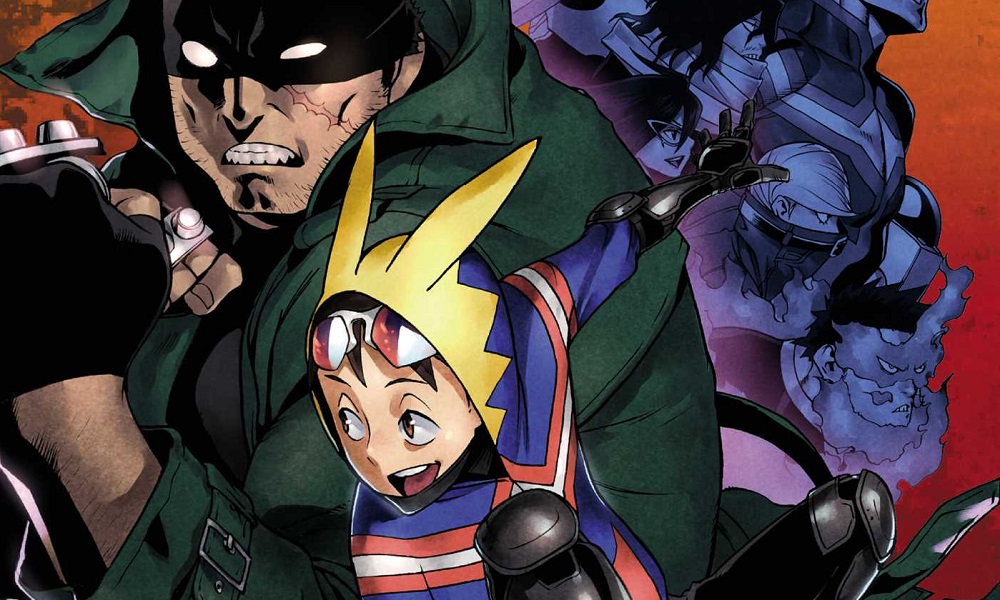 If you’ve taken even a cursory glance at My Hero Academia, then you know this fact: 80 percent of people are born with quirks, with the other 20 percent are quirkless in its universe. It’s literally shown on the back of the blurbs in each manga volume as well as in the narration of the anime. However, the aspect is largely ignored within the main storyline, as well what happens when those with quirks want to exercise them without a hero license. Enter My Hero Academia: Vigilantes, a spinoff that takes place before the main series, with an unlikely trio with some unusual powers. It’s a great first volume that fleshes out the world of heroes with a small-scale overarching story that reintroduces some characters we know and love alongside some new debuts.

This is actually in episode zero, but it gives a good look at what we’re dealing with.

Koichi Haimawari is your average college kid with a less-than-average quirk: He calls it slide and glide, which allows him to crawl on surfaces with ease. Compared to My Hero Academia’s slate of superpowered quirks, he is unfortunately underpowered. As someone who didn’t register in a hero university, he’s not allowed to use his quirk legally (as only licensed heroes are allowed to do this), but he still wants to help out as much as he can. Donning an All Might-styled hoodie, he prowls around the city calling himself “Nice Guy” and doing chores around the street. On one such day, he sees the illegal diva Pop☆Step, a girl who can leap steep heights with ease, as she gets in trouble with some over-eager fans. Through this experience, he also gets involved with the masked vigilante Knuckle Duster, who has some unknown motives for keeping crime off the streets.

While the first volume focuses on the introduction of the main trio, there’s also the main conflict of a mysterious drug called Trigger. A part-time villain is distributing the drug, which turns people into instant villains, causing ruckus across the streets. The police force is hard at work trying to prevent this from spreading, but Koichi and friends manage to stumble across a Trigger user within the first few chapters of the manga. As the team gets acclimated to itself, there seems to be trouble brewing on the villain side of things…

From the very beginning of the manga, it’s clear that the motivations of the protagonists in My Hero Academia and Vigilantes are similar. Both Izuku and Koichi want to be heroes and do good, and they both idolize All Might as the paragon of heroism. However, Izuku initially was quirkless, with Koichi having an initially underpowered power. It’s interesting to see how the two stories branch off from one another, with a mentor that’s starkly different from the other (the author has stated that he based All Might on Superman and Knuckle Duster to Batman i.e. an all-around hero with a solid set of powers compared to a ruthless hero without powers).

Knuckle Duster is the standout character in this manga, as his strength and almost anti-heroic resolve is something that we haven’t seen much in the main series. We definitely haven’t had an important main character that was natively quirkless, so the concept of doing good in a superpowered society without superpowers is a great plot thread. His motivations and true colors will be revealed in the coming chapters, but for now, he’s a well-developed character that will most likely be a fan-favorite in the future.

That being said, it’s unfortunate that Koichi and Pop☆Step are less exciting as characters by comparison. Koichi is the default nice guy who does change his vigilante name to ‘The Crawler”, but he seems very flat in his introduction. While there are moments where he does shine in the first volume, he’s more of the average student that’s more of a sidekick than a hero. That being said, there’s a greater potential for him to shine (as hinted at his development of his quirk’s abilities), but as it stands, he’s a rather flat protagonist. Pop☆Step (real name Kazuho Haneyama) is a better compliment to the cast, though she acts as a typical Tsundere type that behaves erratically to hide her true emotions. It’s a shame she’s relegated to eye candy and her first couple of appearances are limited to her being bait for instant villains, since she has a pretty sensitive side to her character. These two characters have the potential to grow, but as it stands, Knuckle Duster is the star of the show.

Perhaps the strongest point of My Hero Academia Vigilantes is how it expands on the lore and worldbuilding of the My Hero Academia universe. We get to see preliminary looks at heroes like Eraserhead and All Might (it’s actually pretty refreshing to see the latter in his prime, compared to his current state in the main manga), as well as the implications and limitations of using one’s quirk without a hero license. This series is a rather small-scale tale rather than the world-changing narrative the main series offers, and it’s a slower-paced manga when it needs to be. The art style, on the other hand, feels a bit rougher due to another artist taking over the Vigilantes spinoff, but it’s still of comparable quality in its best action scenes, and I really hope this will get an anime adaptation in the future.

The first volume of My Hero Academia: Vigilantes is a great spinoff that delves into themes and dynamics that only gets a few pages in the manga. With a developing cast of main characters and some cool worldbuilding, this is one series to follow for fans of My Hero Academia.

Elisha Deogracias is an aspiring accountant by day, freelance writer by night. Before writing for Gaming Trend, he had a small gig on the now defunct Examiner. When not being a third wheel with his best friends on dates or yearning for some closure on Pushing Daisies, he's busy catching up on shonen manga and wacky rhythm games. Mains R.O.B. in Smash. Still doesn't know if he's a kid or a squid.
Related Articles: Beyond the Page, My Hero Academia: Vigilantes Volume 1
Share
Tweet
Share
Submit