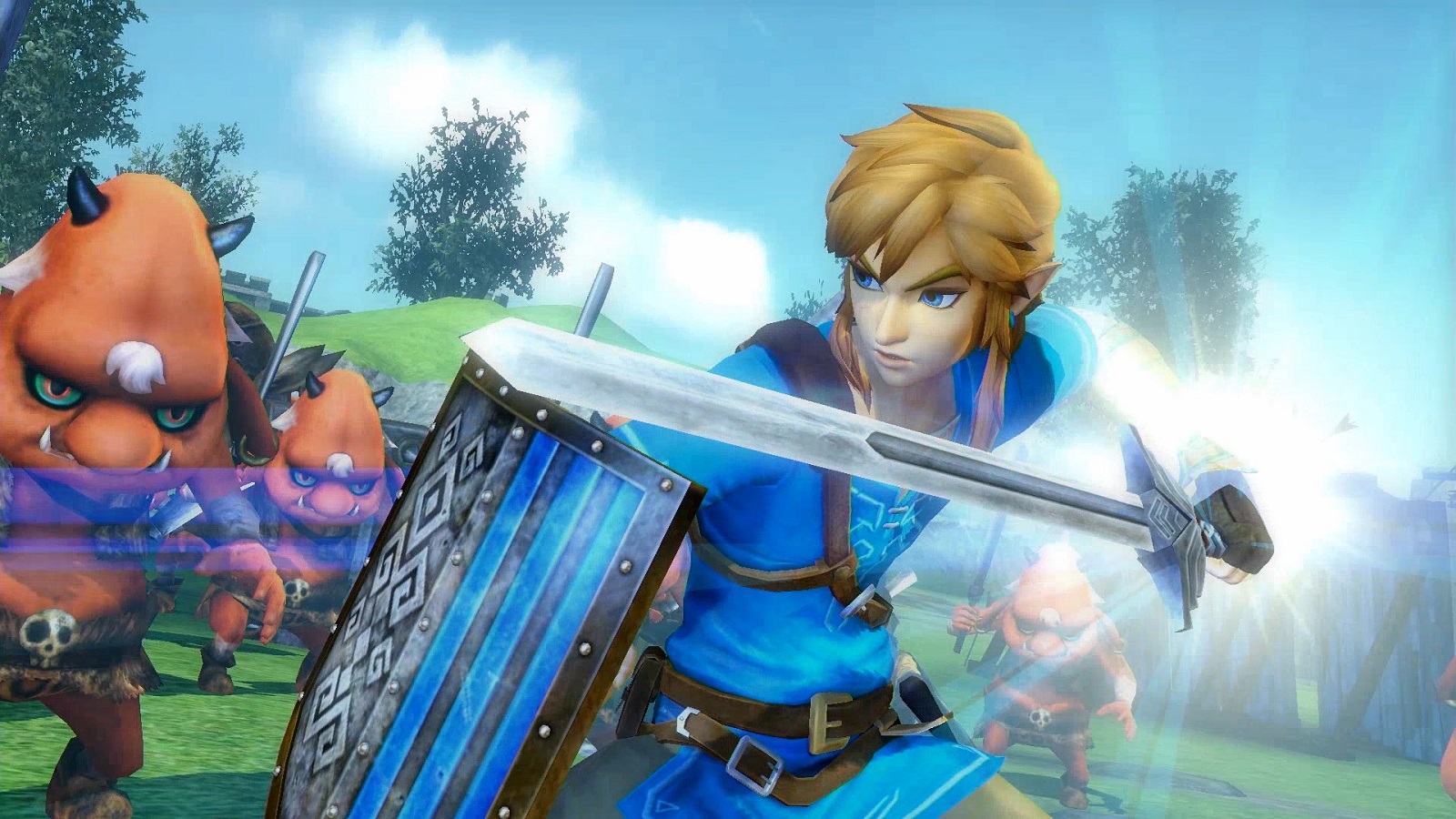 Say what you will about the Warriors series of games, but it provides great mindless hack-and-slash fun when you want it. They might not be as smart and sexy as God of War or Bayonetta, but I’ve loved almost every entry I’ve played (barring the sixth numbered one). The licensed Warrior game spinoffs are even more entertaining, as they stay surprisingly true to the source material while differentiating themselves from their main series. While we got a new spinoff in the form of Fire Emblem Warriors last year, we are graced with Hyrule Warriors Definitive Edition, an expanded version of 2014’s Wii U hack-and-slash game. While still suffering from a few problems, the game is a treat for Legend of Zelda and Warriors fans alike.

Our hero Link begins as a Hyrule trainee, practicing his moves in order to protect the people of the kingdom. However, an evil being named Cia threatens the balance of the land as her goal is to unite the Triforce in order to rule the world. (If this sounds familiar, you probably know what’s to come near the end of the game.) Assisted by fighters Impa and Sheik, the gang comes across Lana, a sorceress who has a mysterious connection with Cia. It’s up to our valiant heroes to save the day before the forces of evil ruin it. Hyrule Warriors contains the complete campaign, as well as some other extra storylines (such as Linkle’s campaign, which covers one new character from the 3DS game Hyrule Warriors Legends, and Cia’s campaign, which gives the villains a little more screentime). Story cutscenes and interactions are mostly voiced grunts with subtitles, but the fully voiced narrator does a decently serviceable job providing exposition at key moments.

As someone more invested in the Warriors mythos and gameplay rather than the Legend of Zelda series, Hyrule Warriors Definitive Edition looks and feels like a Warriors game; you have the nigh invincible protagonist you control as he or she plows through thousands of mooks smoothly, like a hot knife through butter. Each of the dozens of stages plops you in the middle of the fray as you go around destroying enemies and reclaiming keeps in order to balance out the enemy troops with allied ones. You have a repertoire of attacks that you can utilize, and they range from throws to confusion attacks to special crowd-clearing ones you can use once you fill up your special meter with enough regular attacks. You’ve also got some side items ripped straight from the Legend of Zelda series, from a trusty old ocarina to a bow, and even the hookshot (which is helpful when traversing across chasms or bringing the smackdown on a moblin).

Take a look, it’s in a book, READING RAINBOWWWWW

During missions, you’ll also be able to participate in side missions, which range from “defeat these enemies” to “reclaim these keeps”. In the middle of a stage, gold Skulltulas will appear on the battlefield, and you’ll need to fulfill a hidden objective before they can be slain. They’re fun little distractions that will test your micromanagement skills. Giant bosses may also appear, which will turn the game into a Monster Hunter-esque battle. It’s a nice change of pace, and it’s pretty cool that you’ll need to utilize different tactics compared to other enemies.

While you’re strong and can wipe the floor most of the time, your allies and bases need a little more assistance. Most of the game’s stages feature multiple characters you can control on the fly, and if any of them fall in battle, it’s game over for you. You can heal some allied troops at times, but you’ll need to reach them before they perish. Luckily, you’ll get more than enough time to do this, and if you’re wise with your movements rather than turning into Leeroy Jenkins and trying to reach the enemy immediately, you’ll be victorious in time.

Sure Fi, we’ll go with that.

That being said, the checkpoint system is a bit uneven at times. It was rather infrequent, but there were times when it would save at an inopportune moment and I would need to drop everything and head to the assist point or else one of my main allies would fall in battle, causing me to lose and try again. This feeling is mitigated during stages with owl statues (which allow you to warp with an ocarina), but not for the stages without them. The Temple of Souls venue near the endgame is one such example, where Link is weakened by his own hubris after going alone (which is dangerous). Doing this will risk Zelda, and if she falls, it’s game over; the problem is, this event was triggered less than a minute after an automatic checkpoint saved over my progress. I needed to be quick in order to help her and not face another game over screen, which took me half a dozen attempts to pull off successfully. It can be very annoying to have to do the same five-minute stretch over again in order to progress, but this mercifully only happened a couple of times during my playthrough.

Each of the initial roster of ten heroes controls differently even though the commands are almost universally the same; in addition, most characters have multiple weapons and elemental makeups, so you’ll want to experiment with different loadouts during different stages. From the whimsical spells of Lana to the hard-hitting hammer time Darunia offers, you’re bound to find a character that suits you. In between stages, you can also collect materials from fallen enemies and upgrade your characters through a skill tree via the bazaar. It’s a pretty comprehensive upgrade system, and you can spend a lot of time with customization thanks to the dozens of characters available. In addition to the main story (Legend) mode, you can also use Free mode to play through any of the stages with any character you’ve unlocked so far. It’s a good way to practice other character playstyles, and if you want to wreck the world as villains like Cia or Zant, you can run wild here.

In addition, you have the Adventure mode, which is where you’ll most likely spend a bulk of your time. There are ten maps (some which have been added from previous DLC) where you must navigate through different stages with missions in each square. These missions are easy at first, but will ramp up on later maps; it’s perfect for beginners and veterans alike, and is the main way to unlock other heroes. They’re bite-sized levels, so tackling Adventure mode stages is perfect for on-the-go gaming. Depending on how much damage you take and the number of enemies you defeat, you can potentially achieve A ranks, which will unlock more items for your journey. This expansive mode will no doubt appeal to those that need to achieve 100 percent completion in their games. It’s a fun mode that is chock full of content thanks to the Definitive Edition including all DLC and extra maps from previous versions.

As the title implies, Hyrule Warriors Definitive Edition includes all of the content from the Wii U and 3DS versions of the game, with a couple of exclusive costumes for Link and Zelda based on Breath of the Wild. You can also do two-player co-op in all the modes, which is great since the 3DS version omitted this feature; you can even use this mode with just two Joy-Con controllers! You also get challenge mode that includes one of the most cathartic experiences in the series, Ganon’s Fury. As the name implies, implies, you get to control the feral beast as he destroys tons of enemies. It feels like the spoiler-heavy ending to Shadow of the Colossus, and it’s just plain fun to reach five thousand K.O.s in mere minutes.

The new Shadow of the Colossus game looks nice.

The DLC and additional characters from the previous versions are available here as well (and the main Wii U roster plus villains is unlocked from the start); the DLC characters are mostly unlocked through Adventure mode, which is great if this is your first foray into Hyrule Warriors; however, this can feel a little grindy for those who have purchased the DLC content on the Wii U or played Hyrule Warriors Legends on the 3DS. Want to mingle with Tingle? Sorry, you’re going to have to unlock him again before you do.

At least Ganondorf is unlocked immediately this time around!

On the technical side of things, other than the inclusion of two-player mode compared to the previous 3DS release, Hyrule Warriors Definitive Edition gets a graphical upgrade thanks to the improved hardware of the Switch. The game looks lovely docked or undocked, and you’ll get 60 FPS no problem while docked. Handheld mode, on the other hand, does have some framerate issues, especially when you’re in areas with a multitude of enemies. Overall, it’s not a dealbreaker (compared to the old 3DS performance of Legends), but it does come off as a little annoyance for those that will enjoy the title mostly undocked.

Hyrule Warriors Definitive Edition is the best version of the Legend of Zelda hack-and-slash experience. While it does suffer from some problems the original versions had, the plentiful amount of content mixed with entertaining gameplay and colorful cast of characters make this a legend the hero of time would love.

Elisha Deogracias is an aspiring accountant by day, freelance writer by night. Before writing for Gaming Trend, he had a small gig on the now defunct Examiner. When not being a third wheel with his best friends on dates or yearning for some closure on Pushing Daisies, he's busy catching up on shonen manga and wacky rhythm games. Mains R.O.B. in Smash. Still doesn't know if he's a kid or a squid.
Related Articles: Hyrule Warriors: Definitive Edition
Share
Tweet
Share
Submit