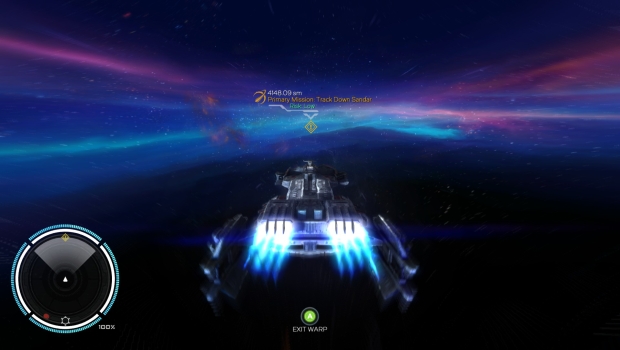 Space isn’t always the idealistic future we paint it to be. While some portray it as a romantic opera of gallantry and humanity unified under one banner, others see it as a dismal and wild frontier, where only the strong and clever will survive. Rebel Galaxy falls squarely in the latter, more akin to Firefly than Star Trek, and turns that concept of space without the frills into one of the most approachable space sims I’ve ever played.

Rebel Galaxy looks to succeed where others have failed to capture the audience of those wanting to captain their own crew, but unwilling to invest in HOTAS (that is, hands-on-throttle-and-stick) gear set-ups, complicated spreadsheets and million-dollar Kickstarter funds. This is pick-up-and-play at its finest.

You don’t always have to fight. Sometimes it’s easy to take the sneaky way out.

Plot is paper-thin, and serves to simply funnel you in a direction, though it’s fairly easy to get side-tracked on the way there. There’s something about your Aunt, and her disappearing, so you inherit her ship and start talking to old, seedy acquaintances… I lost track of the plot and start thumbing through it mostly because it was simply a means to an end. You learn how to fly and shoot. Then comes time to mine rocks for minerals, which is fairly easier with an actual mining laser than a superweapon, as it turns out. You can hail ships to open comms, usually as a peace treaty or trade negotiation, but you can also just tell them they smell bad (I’m not joking). Once that’s done, the tutorials done with, and off you go into the vast reaches of the galaxy.

Ships control very similarly, oddly enough, to those from Assassin’s Creed: Black Flag. You have turrets and broadside cannons — turrets can be automated or controlled, while broadsides can only be fired manually from either side of your ship, but pack a great deal more punch than turrets. This works out because Rebel Galaxy essentially takes place on a 2D place. There’s no z-axis to your movements, so you simply move forward, backward or laterally. It’s disappointing there’s no full range of 3D movement, but once you’re in a tense fight, you’ll usually forget that in favor of dodging the missiles heading for your weapons systems.

Even mining lasers can be effective combat weapons, though they can’t match up to missiles and EMPs.

The beauty is in the execution, not the mechanics or storyline. Rebel Galaxy has an expansive universe that is free to roam, and the sandbox it forms with different factions, trade routes, diplomatic status, and random pirate encounters makes the universe feel alive. Actions happen around you, regardless of your participation. For the first several hours, you’ll likely feel like a fish in an ocean, just trying to get some resources to a station in order to make some quick cash.

Trading is a fair option for making cash, as is mining resources or pirating them from other ships in order to sell them on the black market. Local militia can scan your hull for cargo, though, so you’d better be ready to hide that cargo quick, or make like a bunny and hop on out to the next warp and hope there’s no militia waiting for you there.

The universe itself is a living organism too, with massive asteroid fields to explore and planets to find. Scanning and locating giant space hulks or valuable shards of different ores gives a sense of completion on its own, and just seeing the sights and sounds of Rebel Galaxy is a wonder, especially if your rig can pump out the graphics to showcase it all. I was surprised at how smoothly the game ran, even at highest settings it wasn’t very taxing at all on my computer, though mine runs on the high end of systems. There’s plenty of options, sliders and resolution settings for those with lower-end systems, however, so I’d all but guarantee that if you can run Half-Life 2 on your build, you can run this.

Massive ice shards and ore fields litter the universe, waiting to be mined and traded.

What’s hard to manage is the lack of focus in Rebel Galaxy. The main storyline is fairly linear and uninspiring, often feeling more like an elongated tutorial than anything worth doing. There’s methods of gradually earning money until you have the biggest, baddest ship around, but that would require a significant time investment and for what, I have no idea. There are designs to locate, rare ores to collect, wealth to be collected and invested — but all of this rests solely on the player’s own motivation to continue.

This is most likely due to the lack of multiplayer in the game, something that initially seems refreshing and new, but ultimately left me realizing that multiplayer makes most of these games feel more alive. After an hour or so of Rebel Galaxy, I felt like I had seen every gameplay element, and anything past would be artificial elongation — just my own efforts to keep myself invested. Without that player interaction, the threat of a PvP gank during a routine mining op or trade route, there wasn’t much of a thrill after a few hours.

Still, it’s a good time-burner, and succeeds at making the daunting seem approachable. If the idea of putting on a podcast or radio station and going on some pirating raids against the local mining outfit sounds like a good time, then this is worth a look. If you want something that can emulate the massive battles and complex dogfighting of other sims, however, you might find the reaches of space a little cold.

Rebel Galaxy simplifies the formula in an approachable and exciting way, but the 2D space combat, lack of direction and loneliness of single-player space-faring hold it back from reaching the epic scale of other space sims. A fun solo venture, but it won’t suck out thousands of your hours.