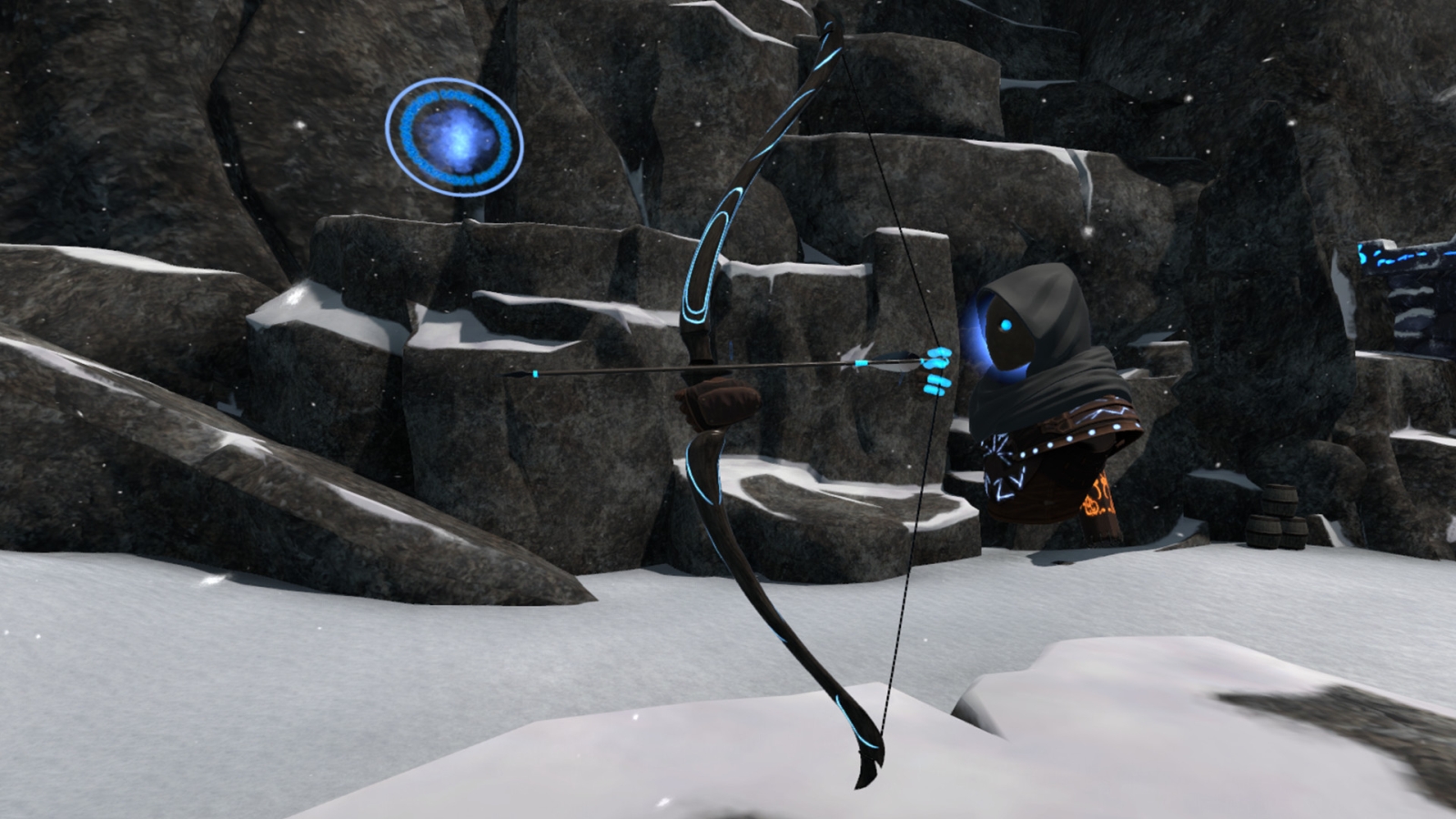 You’ve probably spotted QuiVr in your Steam VR list as one of the top virtual reality titles right now. It’s been in Early Access for a while now, slowly refining this game from what started as a basic tower defense title to something far more nuanced.

The controls, like most archery games in VR, are highly intuitive. If you’ve ever shot a bow, seen somebody shoot a bow in a movie, or can follow the helpful neon green and well-illustrated four-point instructions, you know everything you need to nock an arrow and launch it at your target. Like the real thing, everything that comes after this point is a direct product of practice and persistence.

That shield is gonna be a problem…

Reaching over your shoulder and pulling an arrow from your quiver, you’ll drop it into the channel. Drawing it back properly means anchoring to the chin, cheek, eye, or behind the ear, depending on your particular archery technique. Without teaching a class on why you’d want to do (or avoid) each one, let’s just go with the most common and pull to the cheek. Like the real thing, the arrow has a specific arc of flight depending on how far you’ve drawn it back. Holding the arrow pulled back for a period of time charges the arrow to create a more powerful shot. It all takes a little bit of practice, but I’m happy to say that it’s very rewarding and highly accurate.

Navigating the playspace comes courtesy of large floating targets around the area. If you shoot your arrow into one of these targets, your character will instantly teleport there. Unlike a lot of other archery titles where you might have two or three vantage points, QuiVr has dozens of them. Additionally, the levels are typically set up with multiple gates, so you’ll be pressing forward as you brush the enemy back, eventually culminating in a boss battle at the end of the sequence. You can see a full round with a boss battle below:

QuiVr has a massive advantage over any other archery game on the market — dynamically generated maps. As a result, every time you load into a mission, it’ll be new. Fresh foes, unfamiliar layouts, and different placements for vantage points ensures the game remains unpredictable. Just like the Diablo series, this makes the game immediately replayable for solo adventures or with friends.

To help keep you on your toes, you’ll also occasionally encounter special waves of foes that spawn and will push your shoulders to their limit. Sometimes it’ll be little guys that scoot on the ground (they are especially difficult to hit), or foes with shields that require a bit more precision to down, or maybe a fleet of flying foes that can drop large explosive fireballs on you and the gate to ruin your day. Any way you slice it, these will break up the waves and keep you on your toes.

Magic users should be your first target in the field. They will ruin your day.

Speaking of RPGs, QuiVr has a full equipment system. As you battle through armies of enemies, the game rewards your actions with new equipment. New bows, powers, and armor lie on a spinning wheel that, when selected, are shown on a cool looking paper doll display. This is also how other players will see you in multiplayer, but these items are far more than cosmetic. As an example, you might acquire a Charged Bolt — a lightning blast that has a percentage chance of discharging electricity in a small area. These arrows can be used as an AoE trap as they activate when you miss, allowing you to create easy chokepoints. You might also pick up a Ruby Studded Mask that causes your arrow strikes to explode into an AoE effect of hallowed or primordial damage. Beyond direct damage, there are also traps, quivers that can ignite your arrows, a chestplate that makes your arrow seek their target, and much more. There are several dozen unique items to collect, and the team continues to add more with each patch, keeping the whole thing fresh.

I love the equipment system in QuiVr.

One of the biggest strengths for QuiVr is its multiplayer capabilities. The game provides a seamless experience for up to four players, featuring full drop-in/drop-out cooperative play with full voice chat built in. As the enemies pile up you’ll need it too. Tactical positioning and mixing high ground with low ground will help take out the blended unit assault of armored troops with shields, large flyers with two massive fireballs in each claw, teleporting foes, fast moving chargers, and more.

We did run into one really odd bug with our multiplayer game. After Silas joined my game, we found ourselves in a world devoid of foes. We left and recreated the private game and found all of the enemies running away from us instead of running towards us. The orb in the sky would fill up but we weren’t moving between gates when it completed. It took quitting the game entirely to resolve this issue.

You need to defend yourself from these flyers, lest they bomb your gate.

If there’s one massive feather in the cap of QuiVr, it’s the frequency and quality of the updates this game has received. It has gotten a tremendous amount of attention in Early Access, and now that it’s in final release, that hasn’t slowed. Developer Blueteak has continued to update QuiVr with new features, as well as fixing the few bugs that remained in Early Access (though admittedly I didn’t encounter any in the release product). The best part is that you don’t have to take my word for any of this — there is a demo available to try it out for yourself.

Extensive RPG mechanics, dynamically generated maps, cooperative multiplayer, and continuous updates puts QuiVr in a class normally reserved for AAA developers with expansive teams. There’s a reason QuiVr consistently comes up in everyone’s top 10 list -- this is a title you need in your library.

Ron Burke is the Editor in Chief for Gaming Trend. Currently living in Fort Worth, Texas, Ron is an old-school gamer who enjoys CRPGs, action/adventure, platformers, music games, and has recently gotten into tabletop gaming. Ron is also a fourth degree black belt, with a Master's rank in Matsumura Seito Shōrin-ryū, Moo Duk Kwan Tang Soo Do, Universal Tang Soo Do Alliance, and International Tang Soo Do Federation. He also holds ranks in several other styles in his search to be a well-rounded fighter. Ron has been married to Gaming Trend Editor, Laura Burke, for 21 years. They have three dogs - Pazuzu (Irish Terrier), Atë, and Calliope (both Australian Kelpie/Pit Bull mixes).
Related Articles: Let's Play, QuiVr, VR
Share
Tweet
Share
Submit