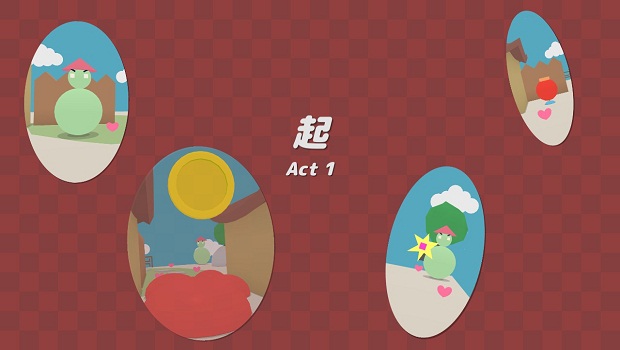 I’m a big fan of games that look deceptively easy but can make things difficult in a heartbeat. Quicktequila’s Lovely Planet Arcade is a great example of this; the game’s stylistically bright visuals and upbeat music masks an unforgiving yet fair arcade style FPS that pulls no punches with its mechanics. You will die a lot in this game, and you’ll love it.

Lovely Planet Arcade is the sequel to 2014’s Lovely Planet, a cute looking game with fast-paced action and a steep difficulty curve. Armed with a slow-loading shotgun, you have to get through four acts and over one hundred levels, shooting green colored snowmen while trying to reach the exit. While the bulk of the levels task you with eliminating all targets, there are some with additional conditions, such as keeping some snowmen alive or collecting coins. In addition to completing the level, you are graded from one to three stars based on time. While it looks almost similar to its predecessor, mechanically Arcade distances itself through the elimination of y-axis aiming.

While this sounds like a straightforward arcade shooter, the difficulty shoots up almost immediately; once I cleared a few levels, I was continually bombarded by obstacles in my path. The levels, while short, are very precise, and getting a perfect three star rank on one is next to impossible the first time you play. Each level is a battlefield, and it gets frantic immediately. This is due to the constricted control scheme: your shotgun, while unlimited, takes time to reload, leaving you open for attacks, and since you’re restricted to the x-axis for aiming, enemies are difficult to eliminate at times. Jumping is almost intolerable without the ability to aim up or down, so this causes a bit of a problem in later levels. In a game where even a fraction of a second could mean life or death, you’re going to experience the latter frequently, although death is a slap on the wrist in this game, so it acts as a guide rather than an annoyance.

Stuff of nightmares, sound of dreams.

While the controls seem limited, most of the mechanics are surprisingly deep and are necessary to get through each of the increasingly hard levels. There was something that clicked every time I was able to pass a level using my newfound knowledge of the stage. The beauty of Lovely Planet Arcade is that it’s difficult yet fair; almost every death I encountered was because of me rather than the game. Thankfully, you only have to finish a certain number of levels before proceeding to another act, so you don’t have to be stuck on one level before moving on to the next. Furthermore, Arcade’s instant restart feature makes every “game over” screen palatable since it encourages you to try again and rethink your actions.

It helps that Lovely Planet Arcade is a learning experience. New enemy types and gimmicks are introduced before you’re used to the previous ones, which ups the learning curve and forces players to factor them in when planning different tactics. While levels are over in less than a minute, it’ll take much longer to think of an optimal strategy to get through them. It can get a bit restrictive at times, since certain traps and enemies might not trigger until you move a certain way, but you can still get creative with dodging bullets and returning fire.

One of the best things about the game is how it doesn’t take itself too seriously. While you will be frustrated at death screen after death screen, you’ll smile at the minimalist cute graphics and wacky soundtrack. The latter has a frolicky feel to it, something that elevates the action yet makes you smile. Lovely Planet Arcade looks like a game that would come out of a Saturday morning cartoon, and its presentation makes dying a little bit easier to swallow.

Elisha Deogracias is an aspiring accountant by day, freelance writer by night. Before writing for Gaming Trend, he had a small gig on the now defunct Examiner. When not being a third wheel with his best friends on dates or yearning for some closure on Pushing Daisies, he's busy catching up on shonen manga and wacky rhythm games. Mains R.O.B. in Smash. Still doesn't know if he's a kid or a squid.
Related Articles: Lovely Planet Arcade
Share
Tweet
Share
Submit