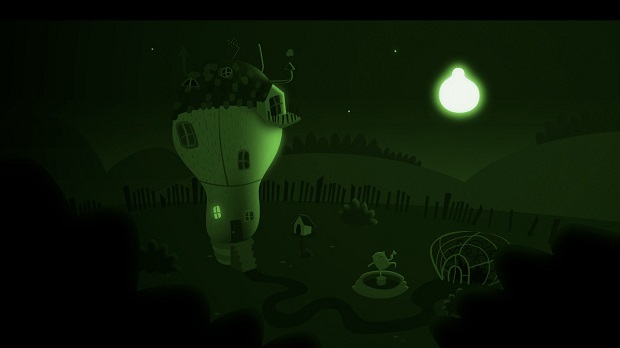 When the team at Bulbware emailed me about reviewing their horror game Bulb Boy, they described the game as “gross and cute.” Having played it, I’d say it’s hard to find a more accurate and succinct synopsis than that.

You play as Bulb Boy, a kid living a normal enough life with his grandpa and his pup. When it opens, you’re all just relaxing together and watching TV before bed. Then in the middle of the night, some sort of dark contagion descends upon the house. It spreads like an infection through the rooms and mutates your grandpa beyond recognition, catapulting you into a surreal adventure. Can you hope to save your little family from perils unknown?

Bulb Boy is named as such because his head is a light bulb. It can not only illuminate shadowy places, but can also be unscrewed and operate independent of his body. Besides your smarts, this mechanic is one of the main things that helps you solve puzzles.

Sometimes you have to borrow a body to get where you need to go.

This point & click adventure title has puzzles that aren’t frustratingly difficult to figure out. Each area has an objective, with the path or recipe to reach it indicated. Sometimes signs or speech bubbles will appear to assist you further, or if you’re really stumped, you can ask for a hint. It’s enjoyable to play through, while still being just enough of a challenge to keep you on your toes.

One challenging aspect of this game is that you don’t have a health bar – one hit and you’re down. There are enemies of all shapes and sizes, from underwater worms to a giant poop monster inhabiting your home toilet, but they all hurt the same. I guess that’s understandable, considering you’ve got a big ol’ glass bulb for a head. These deaths would be irritating, but the frequent checkpoints and the way your progress is saved make them only a minor nuisance.

Something isn’t quite right about that stuffed bunny…

The art style is cartoonish and quite adorable at times, but much of the content is pretty disturbing. There’s seemingly no limit to the things that can transform in your house, and they all contain their own icky surprises. The only respite you get is when Bulb Boy enters these limbo-like dreamscapes, where he’s spending time with his grandpa and his dog and everything is okay again.

The color scheme is simplistic. The world is a green tone by default, but it’s painted in shades of red when you die or when something bad happens in the plot. Everything is dark and dreary, except for the dreamscapes, which are bright, with lighter green details and a nearly white sky. This design choice pairs well with the weirdness and unreality of the content.

Just a lazy afternoon playing with action figures and watering the plants.

This game loves to assert the fact that, as I mentioned, it can be both cute and gross. Aspects of the sound design, such as Bulb Boy’s laugh when he defeats a boss? Cute. Hiding a dead slug in your mouth to trade with a monster for a bomb? Gross. Yet somehow it all just works. It’s like experiencing a story through the eyes of a child, where happiness and horrors can go hand in hand, where one perk of beating the monster is making a disgusting mess in the process.

While it isn’t wildly compelling, Bulb Boy has its own charm. It doesn’t really pull you in for extended sessions of play, but it’s nice to revisit in short bursts, completing a puzzle or two at a time and seeing just what strange scenario it will treat you to this time.

It feels odd calling a point & click horror game adorable, but that’s what Bulb Boy is. Heartwarming moments are mixed with gross-out details without any friction. The surreal story has plenty of twists and turns, and the puzzles are enjoyable to work out. This little indie title is truly a gem in its own special way.

Sarah Marchant is an office admin for a nerdy t-shirt company. She has a soft spot for indie games, a passion for story-driven titles, and a weakness for cooking games and anything with zombies.
Related Articles: Bulb Boy
Share
Tweet
Share
Submit