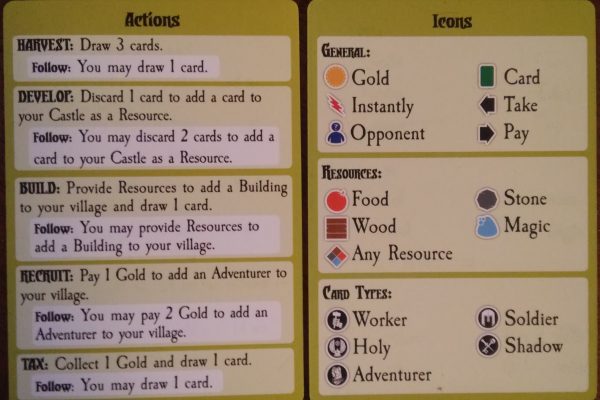 After pushing back the monstrous hordes in Valeria: Card Kingdoms and exploring the wilds they left behind in Quests for Valeria, the time has come to rebuild the ravaged kingdom. A kingdom must have a capital, a fact the dukes and duchesses well know. Whoever readies their land for the city first will be flooded with wealth and authority. Thus, all vie for power in building their villages into cities.

Each player is just such a duke or duchess of Valeria, working to maximize the usefulness of their land to the kingdom entire. Borders are changing in this strange time, so the resources that matter are the skilled adventurers and specialized buildings in a city. The ultimate goal is to acquire more victory points than your opponents, which you acquire through these adventurers and buildings. In some ways this doesn’t make sense, so we are asked to ignore the location and natural resources in each village. It might have been interesting to have minor advantages to start with to give each duke flavor, but the point is a minor one.

All adventurers and buildings all have at least one type to denote how they may aid your fledgling town, such as worker or warrior. Buildings also have a Resource section, which allows you to use the card as a resource by paying gold. All cards also have victory point values that make owning them alone valuable at the end of the game. All cards have special powers, some of which are used immediately and others you can hold until later on. Most powers grant you extra actions, which are crucial ways to optimize time as a resource. Your actions are limited in this game and time is as much an enemy as the other players. Some powers also grant extra victory points if you meet special conditions, like having a certain number of cards dedicated to a given faction at the end of the game. These are few and far between however, so it is unlikely that you will be able to build a strategy around them.

Adventurers tend to be worth more victory points than building cards but cannot be used as resources, so you have to carefully balance how many of each you acquire. In a fantasy setting this makes complete sense. Travelling heroes would be a rare attraction for any city, capable of expanding it in unique ways. However, there is no replacement for the basic backbone of any kingdom: the buildings that fulfill the needs of the citizens.

To kick things off, each player gets a basic player card which allows you to pay a gold for an resource, a reference card, and starting gold which depends on the number of players. They then receive 6 random Building cards to represent the initial state of their chosen village. You then place 5 random building cards out on the table and 5 random adventurer cards, both next to their respective decks. Each player selects a single building to develop at no cost from their hand, and the game begins.

Turns are fast and simple, though the choices you make have implications that affect the game profoundly. You first retrieve any gold you have placed on a building to use their resource types, and then take one action from a list of five. Harvesting gives you three cards. Developing allows you to discard a card to develop another building into a resource; by flipping it upside down you get the ability to pay a gold to get the type of resource it grants. Building has you putting resources gained from other buildings or powers towards a building, which is constructed should you have enough resources. The Recruit action costs one gold and adds an Adventurer to your village, and the Tax action grants you a gold and a card.

These actions feed into one another, creating an important flow from different parts of the building process to others. You have to balance gaining resources with spending them on new buildings or be left behind in terms of victory points and resources themselves later in the game. All of that is enough of a concern, but you also have to be wary of another critical implication to every action: how other players can use those actions to their advantage.

For every action you take, every other player can follow that action with a less powerful version. They will not be able to get as far ahead as you have with a single action, but if they have been strategizing carefully, they can overpower you. It fantastically ties you into every player’s turn; you can’t sit back and play solitaire while only interacting with others by stealing potentially useful resources away from one another. The entire dynamic of gameplay is changed. Using your turn solely to get gold would usually feel like a wasted action. Now that move could be a worthy way to prepare for the future, but only if you correctly guess at the actions of other players.

Villages of Valeria also makes discarding cards a more interesting calculation. Instead of tossing them into a separate pile, you place it on top of one of the faceup building decks, allowing you or another player to redraw them later on. You could be giving a valuable card to another player, saving it for yourself to buy again, covering up something that someone else wants, or a combination thereof. This simple action, which normally feels wasteful, gets tied into a multitude of interesting choices.

Villages was released alongside a companion game, Quests for Valeria, and you would be hard-pressed not to compare the two. They use similar art, which only helps the setting feel consistent, but also a similar set of skills. Both games are about managing resources and timing your actions correctly. There are distinctions in how you accomplish your goals, but overall game flow gives you a very similar feeling either way. Each is distinct and enjoyable, but if you were to play them back-to-back the experiences would bleed into one another.

While both games have similar strengths and weaknesses, the former outweighs the latter in both cases and serve to make both games more accessible. Both have reference cards and rules summaries that make the games incredibly easy to learn and check while you play. This is the kind of design element that’s incredibly easy to implement but almost constantly ignored by games. It makes the game more accessible, more playable, and takes little to no effort to create, yet I find it a rare quantity. Symbols, such as gold or strength also mean the same things across games, making a quick connection for anyone who is switching between them.

The only prominent flaw in Villages of Valeria (and something that it shares with Quests) is a lack of a single driving goal. In general you want to get as many points as possible, but that only means buying as much as possible as fast as possible. Once you find out how to properly balance resource gathering and the action economy you have the game basically figured out. However, getting to that point is fun without being oppressively cerebral. There is a sacrifice of strategy for playability, but that decision was deliberate. In the 45 minutes to an hour long playtime, it’s only near the latter half that you realize there is little to build towards, but by that time you are tied up in enough small plots of your own that you may not pay it much heed.

Speaking of timing, the end of the game is player determined, to a degree. There are no given rounds to decide when you stop playing. The game ends after any player has completed a certain number of buildings or recruited a number of adventurers. This forces you to keep track of how other players are progressing, which can vastly alter the tempo of the experience. If someone wants to put the pressure on, they will cause everyone to either speed up themselves or deliberately slow that person’s pace. It is another small addition that adds surprising variety to the experience.

As a game that shares a setting with two others, some art pieces are recycled, but thankfully these are few, and the art regardless of source is exemplary. Characters and locations are vibrant and brimming with personality. The more you take these cards in the more you appreciate not only the pictures themselves but the art design as a whole. Despite the detail on all of the cards they never feel cluttered, and the colors never clash with the symbols you need to interpret. There is a slight dark vagueness to the edges of the cards that feels naturally integrated into the scene, but serves to draw your eyes towards the center, where the action takes place.

Villages of Valeria functions better at higher player counts than lower ones, to maximize the game’s methods of interaction. There is a solo mode, but its complexity does not play particularly well into a solo experience, especially because you are losing out on the special aspects that only come in when you have multiple players. Two player mode also works, but still lacks some of the interactions at which Villages most excels.

Villages of Valeria is a fast, engaging experience with unique methods to keep players maneuvering around one another. The strategy is limited to keep it to a short playtime, but accessible and satisfying during its run.

John Farrell is a legal aid attorney specializing in domestic violence, living in West Chester Pennsylvania. You can listen to him travel the weird west as Carrie A. Nation in the Joker's Wild podcast at: https://jokerswildpodcast.weebly.com/
Related Articles: Tabletop, Villages of Valeria
Share
Tweet
Share
Submit