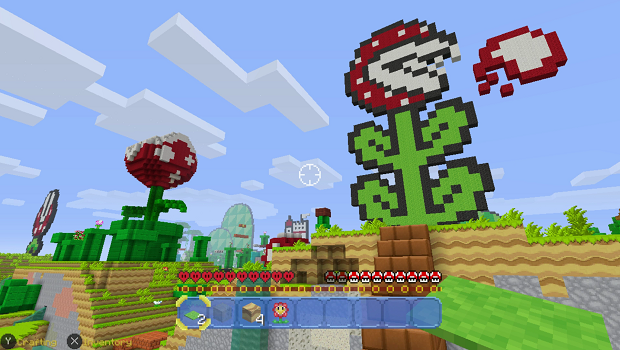 Punch a tree. Make some tools. Dig a hole. Every new playthrough of Minecraft begins as such, and though numerous changes and additions have come over the years, the core gameplay will always come from mining and crafting. That being said, this most recent version does bring enough new changes to switch things up.

Anyone who’s played Minecraft will already be right at home with the Switch version, as the same gameplay that the game’s been known for since its alpha stage is still the core of the experience. Even someone like me, who has only played on-and-off since the game’s official release in 2011 was able to jump right into this version and start mining and building just like I used to. The current console version isn’t quite as up to date with the features of the PC version (the reworked combat system and off-hand mechanic haven’t made their way into this port yet), but like I’ve mentioned, this is hardly important. At its core, Minecraft is a game where you create your own goals and make your own fun — sure, there’s a “final boss” to defeat and a credits sequence to watch, but you go right back to playing after you’ve won the fight. Exploring more of the world, building incredible structures, making intensive mechanical redstone contraptions, fighting as many monsters as you can — whatever you want to do in the game, it’s available for you; it’s up to you to choose your own adventure. If you like the experience that Minecraft has to offer, then you’ll be right at home with the Switch edition. However, there are some new features that may win back those who aren’t the biggest fans of some aspects of the game.

I personally found that the biggest thing the Switch version brings to the table is, well, the ability to bring the game to the table. Or the bus. Or anywhere outside of your home. Unlike the Pocket Edition of the game, the Switch’s superior screen size, graphics,  and controls make the portable experience immensely more enjoyable. Not having to fumble around with touch screen controls, coupled with the ability to see the game much more easily than on a phone screen, makes portability fun. Throw in the fact that local multiplayer is incredibly easy and accessible — all you have to do is mark your world as multiplayer, and players can join at will — and it’s a superb local experience. You can also play split screen in undocked mode, but I wouldn’t recommend it — the small size of the Switch’s screen makes it nearly unplayable with more than 1 person. That being said, split screen multiplayer in docked mode works like a charm — even with all 4 possible players. Online play over Wi-Fi also works perfectly — after I remembered to check the “online game” option, that is. I didn’t realize that that was why it wasn’t working for longer than I care to admit.

The minigame modes that previous console versions added are present here as well, and are also a lot of fun — one involves breaking the floor in order to send your opponents into the lava below. There are 2 versions of this game, one where the players break the ground with a shovel on a singular level, the other where there are 3 layers and the players must use snowballs to break the terrain. The second game is a Hunger Games style battle arena with chests full of equipment scattered throughout the map. The chests refill with random items at set time intervals, ensuring that everyone ends up with something. Unfortunately, the third minigame seen on other consoles, Glide, is not yet available for the Switch port. There are also several mash-up packs that showcase various themed buildings and texture packs — the Super Mario pack features Mario textures and music, and several intricately detailed buildings paying homage to the acrobatic plumber’s home series. Other packs include Greek and Chinese mythology, and these are just as detailed with regards to their respective subject matters.

Minecraft is a pretty simple game at the end of the day. It offers the same basic experience even after years of updates and additions, and that’s one of the game’s greatest strengths. The Switch version may add some nice new features, but ultimately, Minecraft is Minecraft. If you enjoy the concept and the gameplay, then you can happily play the Switch version with no worries. If you’ve been put off by the time commitment of the game in the past, the Switch’s design makes playing in short bursts very enjoyable, so this might be the version for you if that’s why you weren’t keen on it before. The ability to take the game on the go in a more meaningful way than the smartphone version is very welcome, and the multiplayer is polished and fun. All in all, this is a great port of a game that nearly everyone who’s into video games is familiar with, and will be a fine addition to fans’ Switch collection.

Minecraft is still the same great game, and it feels right at home on the Switch. It feels awesome to take the game on the go with such tight controls and accessibility, the online functionality is excellent, and the game is still a ton of fun to play with friends.

Noah McGuire is a senior at the University of Michigan - Dearborn, currently studying Journalism and Screen Studies, with a minor in Game Design. His earliest memories of gaming com from the family sitting around the TV watching his father play Donkey Kong 64, and he one days hopes to be a part of making games that provide more people with those fond memories. An avid Legend of Zelda, Overwatch, and Dark Souls fanatic, along with enjoying weekly sessions of Dungeons and Dragons and the occasional game of Twilight Imperium, he'll always shoot straight on his opinions -- even if it'll land a bullseye on the "incredibly blunt" target.
Related Articles: Minecraft: Nintendo Switch Edition
Share
Tweet
Share
Submit