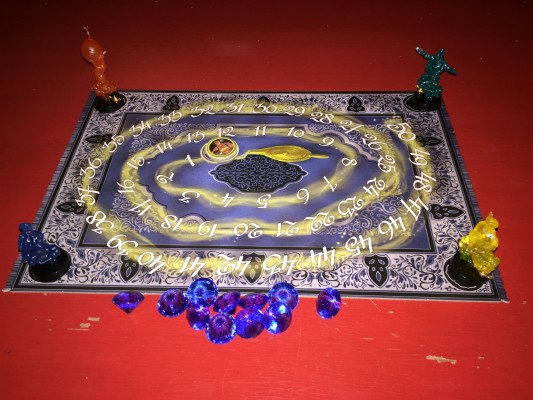 Starting out in Sultaniya, you are given a character with a foundation. Each character has different ways to score points. One player might be trying to incorporate windows, while the other gains points from towers. One player may compete for cupolas, while gardens might be the strategy to success for others. You need to be careful with the setup though, because it is possible to have one person not to have any competition on certain structures, or have everyone lusting for the same tiles. The foundations can be flipped to show a second character, but the game recommends that all players use the side with either one dot next to either side of their character’s name or to use the side with two dots on either side of the character name. While I appreciate the thoughtfulness of this, it forces you to carefully consider your setup at the beginning of the game, especially with a two or three player game, because each side has different objectives for scoring points.

Along with the starting foundations, each player is given two secret objective cards. These can give you extra points specific to the symbol on them. However, they may have to be on the same row or the same column. You might also gain points for the number of Djinn in front of you at the end of the game or the number of sapphires. These bonus objectives can help your score, but they never seemed to alter the game so much that it gave someone a huge advantage over someone else.

Building your palace is done by placing tiles on your foundation. Each floor is placed in a separate pile and is color coded. The bottom floor accented by blue, the next floor containing red highlights, the next green, and finally gold tips touching the sky. All the tiles are double sided, where the flip side is the mirror image of the facing side. These have the symbols that you are trying to build on them, as well as sapphires.

Each player has three options on their turn. They can either build, use a Djinn, or pass their turn. Building involves revealing tiles from a pile, so that up to three tiles are laid in front of each pile. Players can still see the top tile of the pile, but it is not available to be played. Once tiles have been revealed, the player takes any laid out tile and places it on their palace. You have to build in a logical manner, so you can’t build wider than the foundation with the secret objectives placed next to it. You also need to stagger the tiles and have at least half a tile supporting the tile above it without creating a hole in the palace. The rules don’t mention what happens if the person reveals tiles and isn’t able to build because none of the tiles match their palace. The designer has clarified that the player then passes and gains two sapphires.

Calling a Djinn requires sapphires. Players gain them by either passing their turn to gain two sapphires or by building a tile on their palace that shows sapphires on it. Four Djinn are available, but a player can only call on one Djinn during their turn. The blue Djinn costs a single sapphire and allows you to take all the tiles in front of a single pile, put them on the bottom of that pile, reveal up to three new tiles from that pile, and then build onto your palace if you wish. The red Djinn requires two sapphires and allows you to move a tile from your palace to another free space in your palace or to the bottom of the pile. The player can build normally if they wish after that. The green Djinn also needs two sapphires for his services, which allows you to build twice on your turn. It even lets you reveal tiles from two different piles and then build two tiles from all the revealed ones. Finally the yellow Djinn consumes three sapphires, but he lets you search through one pile for any tile they wish and build it in their palace, keeping the pile in their current order.

The end game triggers when one player builds their fifth rooftop tile. Once this happens, each player gets one more turn. Then each player counts up their victory points based on the scoring symbols and the secret objectives. In the event of a tie, the player with the most sapphires wins.

The palaces at the end of the game look spectacular. The well-done artwork gives a feeling that you have actually accomplished something by the time you have finished your palace. Since you have to match artwork they look like they had a blueprint behind them, not a haphazard mishmash of decorations. The Djinn are incredibly well sculpted and contain features representing the special power they enable. For example, the red Djinn carries a giant bomb on his shoulders, while the green one has his arms spread out with his hands wide open and pointed up.

While the game sounds very simple, it has more heft than I originally expected. I expected something similar to Carcassonne with tiles that you could practically lay down wherever you want. However, having the different piles, deciding which pile to reveal from, and which tile to build can be difficult. Everyone watches when one player starts building on the higher levels. The sapphires are important for using on the Djinn, and when to call on the Djinn takes careful consideration.

Unfortunately, the entire experience falls flat in the end. All of these wonderful and beautiful palaces are built, but they are reduced to the most mechanical way of determining a winner, counting points. A score track is included, but it isn’t really needed since everyone counts points at the end of the game since your score can change depending on the Djinn used. My friends lacked excitement during the game too. While occasional comments about one player stealing the tile that another player wanted occurred, the normal banter amongst us didn’t exist. The player interaction is rather faint, making the game feel like it should be lighter.

While Sultaniya isn’t a bad game, it isn’t a good one either. I wouldn’t say no to someone who really wanted to play it, but I wouldn’t go out and suggest playing it either. I like the concept behind it, and I was hoping to add another good tile-laying game to my collection. Unfortunately, this isn’t going to be the game to fill that gap.

While not working as a Database Administrator, Keith Schleicher has been associated with Gaming Trend since 2003. While his love of video games started with the Telestar Alpha (a pong console with four different games), he trule started playing video games when he received the ill-fated TI-99/4A. While the Speech Synthesizer seemed to be the height of gaming, eventually a 286 AT computer running at 8/12 Hz and a CGA monitor would be his outlet for a while. Eventually he’d graduate to 386, 486, Pentium, and Athlon systems, building some of those systems while doing some hardware reviews and attending Comdex. With the release of the Dreamcast that started his conversion to the console world. Since then he has acquired an NES, SNES, PS2, PS3, PSP, GBA-SP, DS, Xbox, Xbox 360, Xbox One S, Gamecube, Wii, Switch, and Oculus Quest 2. While not playing video games he enjoys bowling, reading, playing board games, listening to music, and watching movies and TV. He originally hails from Wisconsin but is now living in Michigan with his wife and sons.
Related Articles: Sultaniya, Tabletop
Share
Tweet
Share
Submit