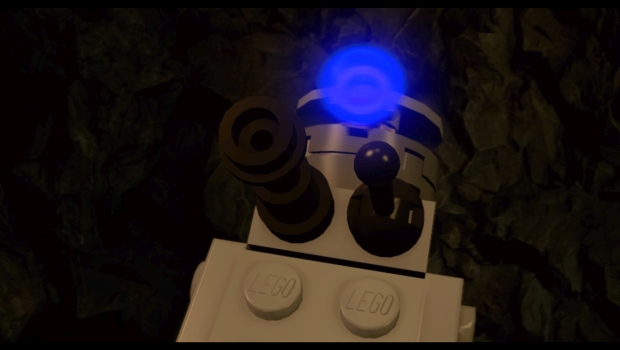 Toys-to-life games haven’t managed to hook me in at all. The idea of game content tied to physical figurines was already a little sketchy, and when you start looking at the price tag of the figures, all the novelty of putting a figurine on a pedestal and seeing them pop into the game was lost. There wasn’t that element of “toy,” they were just figures that you had to place on stands so you could play a new level.

I won’t say that Lego Dimensions has completely reversed my stance on the matter, but it’s at least softened enough to accept the game into my heart as a solid entry in the Lego game series.

What immediately captured me was that, in starting up the game, within ten minutes I was told to put the controller down and bust open the box of Legos sitting next to me and start building. It’s a physicality that really builds on the idea that you are a playing a Lego game, and not just a toys-to-life game with a Lego skin. Every character has to be constructed and placed on the portal, which you also build from miniature bricks into an impressive display.

Puzzles aren’t too difficult, though they usually require use of the portal mechanics.

After building your portal and trio of base game characters, you can launch into the story mode and take off. This is where the game starts to significantly resemble the Lego formula: you run through each world, completing puzzle objectives while beating up bad guys with fairly basic controls. It’s a good thing that the fighting and action moments are relatively simple given the target audience, but this sometimes leads to frustration when cars don’t handle like they should or combat becomes a litany of smashing your attack button into the pad.

The real charm of Lego Dimensions is in the characters and worlds themselves. Your starting trio of Batman, Gandalf and Wyldstyle play off each other perfectly, creating lots of hilarious interactions between the three as they traverse through worlds. Other characters don’t have the same level of interactivity or interesting moments that these three do, but they still add to the experience just in how great it is to play as Lego versions of Dr. Who or Chell.

The campaign goes to crazy places, as you’ll visit locales like Springfield, the Wild West, and Glados’ Testing Chambers. A personal favorite of mine was the Dr. Who level, which has a specific section that viewers will remember quite well — the weeping angels make an appearance, and it’s every bit as creepy and memorable as the episode “Blink.”

The weeping angels portion is one of the best parts of the campaign.

The production value is much higher this time around, with fully animated and voiced cutscenes, and tons of different areas to explore that are all fun to play around in. A lot of the enjoyment is just in seeing these characters mashed together – having Scooby-Doo drive the Batmobile or the Wicked Witch fight a Dalek is a good time, every time.

Your Dimensions portal comes into play through puzzle sequences where you have to physically move characters between the three pedestals to different pedestals on the portal in order to do something, like transport them around the room or dodge incoming enemy attacks. It’s a novel idea, and a good way of reminding you that this is a toys-to-life game and not a game that requires toys to play, but it means a lot of time dropping your controller to shuffle places like a game of musical chairs. I got really tired of these sequences really fast, especially because while the left and right pedestal can hold three characters each, the middle can only hold one – you often end up doing some fast hand gymnastics to keep a character active in-game while still putting them where they need to go.

The other rub of Lego Dimensions is that the asking price is fairly significant. $99 for the base game and portal with three characters and a vehicle isn’t bad, but the Adventure packs that contain additional levels and a single character for them are a full $30, with sets of add-on character packs costing $15 each. It doesn’t help that the Portal expansion is the only one that feels really fleshed-out; the Simpsons Adventure Pack isn’t very big, and Back to the Future is pathetically short. It’s hard to justify the buy-in price if you’re not attached to these characters.

If you are looking for a toys-to-life game, though, it’d be hard to turn a side-eye to Lego Dimensions if you’re a fan of the original blocks that started it all. A lot of the charm and laughs from projects like The Lego Movie were carried into this game, and franchises like Dr. Who have some of the best video game representations they’ve ever seen in Dimensions. Just be ready to pay a little extra for the quality.

Lego Dimensions is a great blend of toys-to-life and charming Lego gameplay, but falters under the monetary weight required to get the same breadth of play that previous games did. Some of the best content in the game is locked behind figures, but if you like building with Lego bricks and playing Lego games, this a no-brainer.