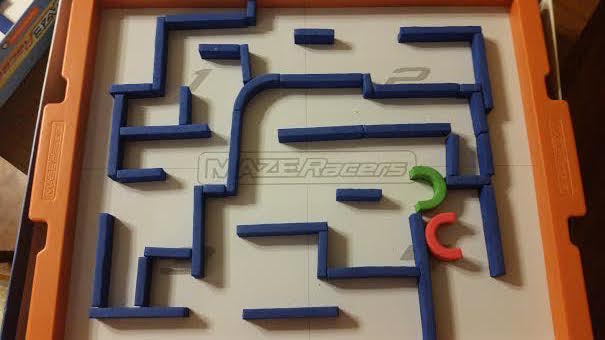 When I’m doing a review, I do a lot more than rush through the rules and play the game. I like to think about what I just played and discover what makes the game work or what kept it from being a great title. As you would imagine, my tedious nature tends to create a backlog of games. Maze Racers became one of those games that got put in the queue. Interestingly, it’s there that the game made its first impression on me. My kids often sift through my latest deliveries and generally walk away uninterested. Like some sort of all-powerful Sith, the pull of electronics is usually too strong. But then they got out Maze Racers. Sure, the animated ball zooming through a blue maze was interesting, but the three words printed on the cover is what got their attention. Plan! Build! Race!

Soon, they were into the game, pulling out its contents, which is a surprising amount for the price. My children discovered two magnetic boards, two complete set of magnetic walls, a sand timer, maze balls, and even wood blocks to check the width of the maze pathways. My eldest soon realized the nature of the game was simple enough. Two players design a maze on their respective boards. Once each maze is completed, the players swap boards and race to complete each other’s mazes before the other.

Simplicity is Maze Racers strength as well as tapping into your creativity.

It wasn’t long before they were designing mazes, trading them, and beating each other’s creations. Surely, I thought, the novelty would wear off, yet after completing one maze the kids would set about tinkering and experimenting with new options. Designer Andy Geremia had a lot of foresight for creative play. The box is packed with various lengths of walls, even curved ones, to allow for a plethora of options. It wasn’t long before my kids were bringing my wife and I their masterpieces, eager to see how quickly we could complete them. The massive wargame I had situated in front of me suddenly took a backseat to a game I had originally relegated to the future play pile. I tend to gravitate toward the complicated, preferring a brain burning experience to that of a filler game. Yet, I had a tremendous amount of fun building mazes with the kids.

So what makes this game so appealing? Obviously, there’s a certain appeal to completing a maze. It’s one of the first things to be completed on those kid’s menus at a restaurant. Geremia goes one better in allowing the design. With spacious boards and numerous walls, creativity is almost boundless. But the appeal goes beyond the fun of mazes. It’s the simplicity that matters here. You don’t even need to read the tiny two page instructions to realize the game’s goal.

Maze Racers gives you a lot for your money with plenty of walls to build the most elaborate of mazes.

The game has more than simply building and completing mazes. Added into the experience is an element of dexterity. It’s fairly easy to look at any maze and determine the proper path through it. In Maze Racers, players have to tilt the board to steer the ball through the maze to get to the objective, which is made a bit simpler thanks to handles built into the boards’ sides. Even so, this ends up being a great equalizer for someone like me who does well at mazes but has the dexterity of a drunken wombat.

The game also lends itself well for traveling. The caveat of board games has always been that they don’t always travel particularly well. The magnets in Maze Racers hold strong, even jostling the board won’t disturb the walls. The magnetic pieces slide along the wall well. The pieces are covered on the top with a felt like material, so they will get a little rougher looking over time. Otherwise, the game is remarkably put together. It’s already survived numerous sleepovers and campouts.

This may not be the type of game to inspire weekend gaming sessions or entice a group over for gaming night, but Maze Racers isn’t that type of game. It’s the quintessential filler. Accessible enough for anyone to play. Quick enough to be played in minutes. Versatile enough to be played anywhere. If you have kids, or if you simply like mazes, I don’t think I can recommend Maze Racers enough. Board games are meant to be, above all us, fun. Maze Racers fits that the bill perfectly.

Maze Racers is an addictive little maze builder that is a great game for children, though adults will get more from it than you think. It's also a great bargain considering the amount of materials packed in the box.