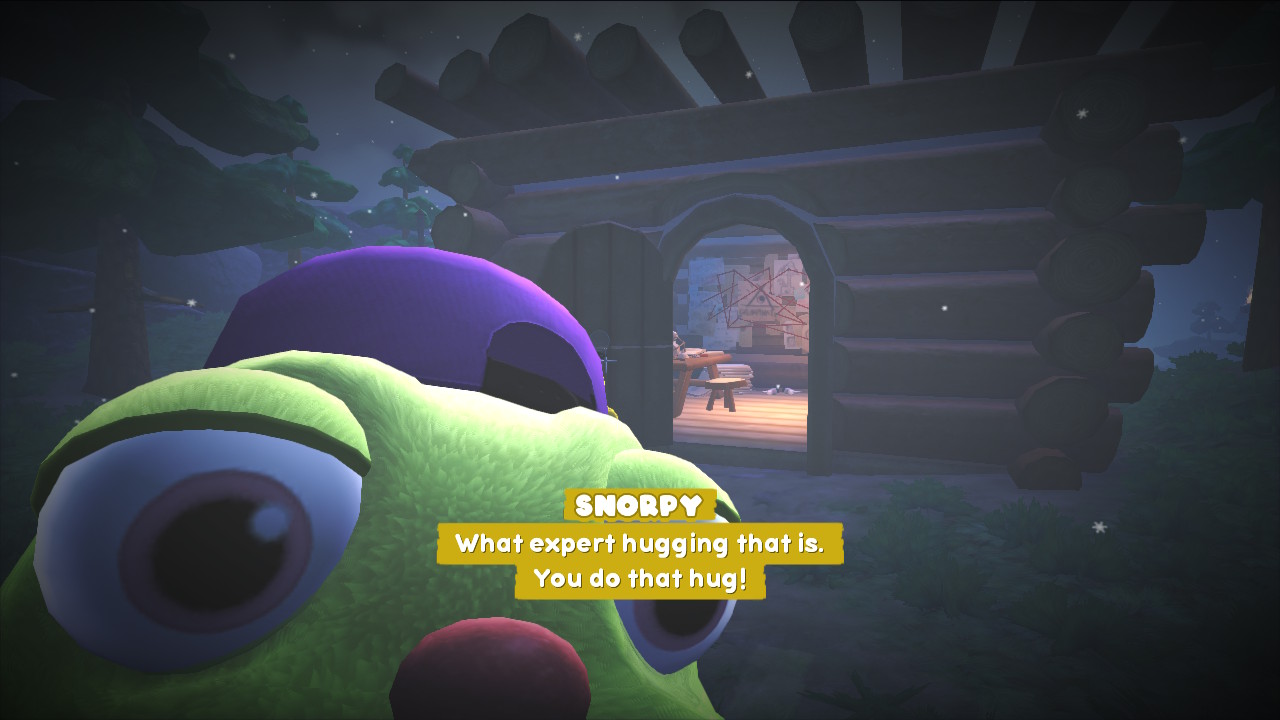 A new island filled with Bugsnax has appeared just off of Snacktooth. You, along with four friends (?) including Chandlo, Floofty, Shelda, and Triffany set sail to the island. Just like Snacktooth, Brokentooth is populated almost entirely by Bugsnax – but they’ve grown to massive size! Luckily the ancient Grumpus civilization had invented a powder to shrink the Bugsnax down to a more edible size. To properly survey the island, you’ll have to use all your tools along with the powder in creative ways to solve puzzles and give your friends some snacks.

2020’s Bugsnax turned out to be a surprise hit. You can read our review here, and I largely agree with Lead Editor David’s opinion. It’s a lighthearted, Pokemon-esque adventure with great characters that gets weirdly dark right at the end. You explore the island, catching Bugsnax with various tools like a grappling hook or a strawberry in a hamster ball, and feed them to Grumpuses to change their body parts into said snack. It’s cute and has a lot of heart, with a great amount of queer characters taking center stage. The Isle of BIGsnax is a free update to the game, which was released alongside new versions on other platforms.

I played through a majority of the game again on Switch, but the expansion has some fairly steep requirements, so I went through that on PS5 where I had already completed most side quests and the main story. To reach Brokentooth, you have to rescue all the characters involved and complete all their side quests chains, including Snorpy’s. I remember Shelda and Floofty’s quests in particular being fairly difficult, so if you can I would recommend going in with a previous save rather than starting over.

If you do choose to start over, the Switch isn’t a bad place to do it. The game’s cartoony art style translates well to the less powerful hybrid console, though it does struggle to keep the framerate up at times. There are brief moments where the game can reach the 60 you get on the PS5, but those are incredibly rare and I mostly saw what I think was somewhere between 25 and 40 fps, trending towards the latter and above in less dense areas. It’s perfectly playable, and you can even disable detailed shadows if you really want to boost it up higher. My main problem is the pop-in, or should I say grow in? As you get closer to objects like bushes or grass, they sprout out of the ground. It’s a charming effect, but it does happen far too close to your character for my liking and can make some areas more difficult to parse. The game plays basically the same otherwise, and it’s a great showing for an indie studio.

Moving on to the meat (pun intended) of the new version, the Isle of BIGsnax introduces several new Bugsnax to catch in a pretty large, open area. The whole island counts as one location with no loading zones, and it feels about the size of one and a half of the base game’s larger areas put together. The structure is more open ended as well; upon establishing a base camp, each Grumpus goes about their own study of the island and you have to finish all of them to complete the questline. All four stories have some fantastic character development, Chandlo and Floofty’s stories being particular highlights. I won’t spoil it here, but it really feels like an extension of the base game rather than something tacked on, which is very impressive from a writing standpoint.

The island itself is a lot of fun to explore. It feels like there are secrets hidden around every corner, though not in an overwhelming way. You can look around on your own, but each questline will slowly lead you to almost every nook and cranny on the island along with catching every Bugsnack. To catch said snax, you’ll need to use every trick at your disposal such as tricking a spicy snack into heating up a frozen one, having a snack carry a trampoline to reach new heights, or even shrinking a snack so you can catch the ones that live on its back. While it was a good challenge, I never felt stuck on a single puzzle like I did in the base game. I knew what I had to do in the end, and figuring out how to get to that end is where the fun lies. If you’re a completionist like me, there’s even a very special, hidden challenge to overcome once you uncover the Island’s secrets. 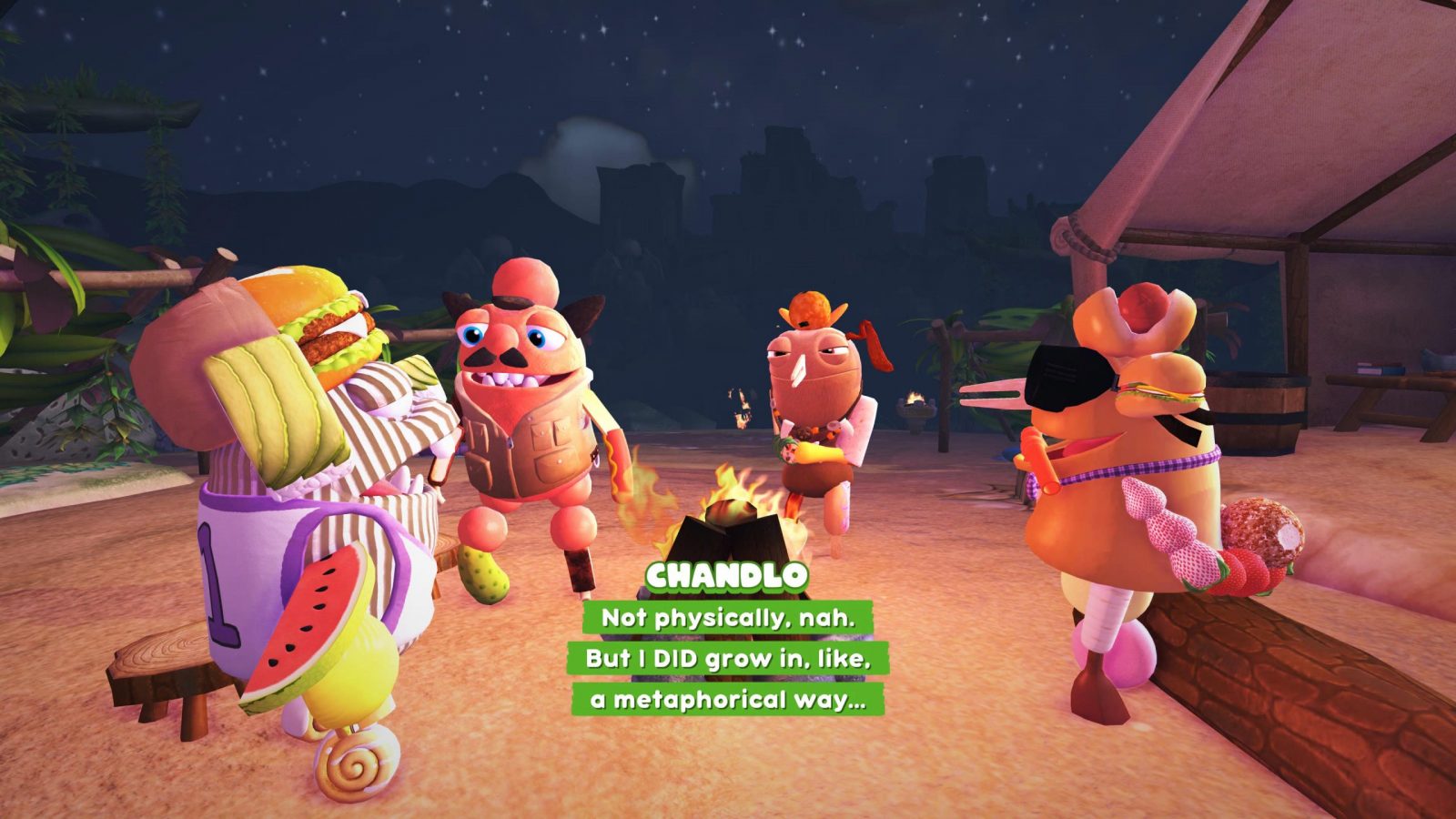 The only issue I have with the BIGsnax island is that there’s a persistent fog obscuring the distance. I assume this is for performance or loading reasons, but as a sucker for gorgeous vistas in games I’m a bit disappointed. Reaching the island’s highest point and looking out, you’ll mostly see that white mist instead of what could have been some great views. I mostly point this out because the characters are occasionally astonished by the view, when I could barely see anything.

Along with the new island, Bugsnax also added a house for your character to live in and decorate, along with a mailbox where you’ll receive furniture and new quests. Aesthetically I prefer to live in the airship, but I can’t deny making a home in Snaxburg makes the game feel all the more cozy. All in all, this bite sized amount of new stuff makes Bugsnax feel really good to revisit. It’s just the right amount of content to remind you why the game is so fun if the ending left you traumatized like it did me.

Bugsnax’s The Isle of BIGsnax is a great reason to revisit Snacktooth. Whether you’re a seasoned journalist or catching your first Strabby on a new platform, you really can’t go wrong with this delightful adventure.

David is the kind of person to wear his heart on his sleeve. He can find positives in anything, like this is a person who loved Star Fox Zero to death. You’ll see him playing all kinds of games: AAAs, Indies, game jam games, games of all genres, and writing about them! Here. On this website. When not writing or playing games, you can find David making music, games, or enjoying a good book. David’s favorite games include NieR: Automata, Mother 3, and Gravity Rush.
Related Articles: Bugsnax, Indies
Share
Tweet
Share
Submit