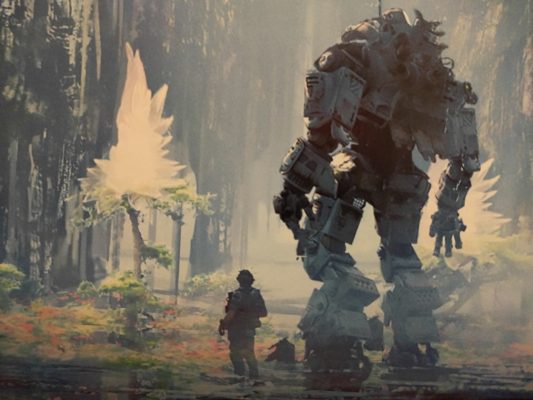 There is no doubt that the story of Rifleman Cooper and his impromptu-partner BT-7274 was a bit of a surprise. The single-player portions of Titanfall 2 are a triumph, and the multiplayer is pretty fantastic too, as you can see in our review for the game. Respawn Entertainment pulled out all the stops, and the community is responding, but how’d they pull the sequel together after the fantastic-but-short-lived Titanfall?

It should come as absolutely no surprise that Titan Publishing is the publisher of The Art of Titanfall 2 — it’s relevant to their interests. Teaming up with Respawn, they’ve pulled back the curtain on the sequel to showcase the development process, some excellent renders of the Titans, pilots, locations, tech, and a badass look at the maquette process that brings it all to life.

The “boy and his bot” singleplayer is fantastic

The book is split into five sections (though the fifth one is listed as “4” in the index), opening with an introduction Art Director Joel Emslie of Respawn. Prolific author and videogame author veteran Andy McVitte (involved with art books for the original Titanfall, Assassin’s Creed III, Alien Isolation, Rise of the Tomb Raider, Watch Dogs, and more) returns to pen The Art of Titanfall 2. Teaming up with Emsile, McVitte walks us through amazing artwork and digs into the methodology behind their designs, the chords the team was trying to strike with each Titan design, and much more behind the scenes.

It’s cool to see the evolution of BT

The first section covers the six major Titan types over 22 of the 192 pages in this hardback. The Bison, Legion, Northstar, Scorch, Ronin, and of course, BT-7274 types of Titans are all covered in exquisite detail here. What I enjoyed most is the detail behind each one, and some of the little nuances you might have missed while playing the game. For instance — did you notice that when Cooper is piloting BT he’s right handed, but when he’s ejected BT flips to being left handed? I know I missed it, but it’s a cool way of differentiating who is at the helm.

Chapter two of The Art of Titanfall is dedicated to the meatbags that inhabit the awesome mechanical monstrosities of Titanfall 2 — the pilots. Starting off with single player protagonist Jack Cooper (with his signature helmet that you could get and wear if you ordered the Collector’s Edition of the game), but also what could have been…Jane Cooper? The original design called for a gender selection for the protagonist. Artwork was made and is shown here, but that plan didn’t survive the development process.

The Titans are the highlight of the show, of course.

Beyond Cooper’s profile lies that of the multiplayer archetypes, variants of the classes (e.g. Edge Wielder, Simulacrum,etc.), as well as profiles for the Apex Predators like Kane, Bish, and Ash (the group that pursues Cooper in the single player campaign), and returning friends like Sarah Briggs. It’s amazing the amount of work the team put into the cornucopia of different looks for helmets, armor, and just the general dress of each pilot.

The third section of the book covers the tech in Titanfall 2. This includes the vehicles, such as the Goblin dropship, Hornet interceptor, and Phantom fighter. There’s also a great showcase of concept artwork for the various turrets, including those little bastard Suicide Spectres. Reapers and Stalkers are featured frequently in the single player campaign, so naturally they get some background exposure, as do the weapons that you’ll use to take them apart.

Chapter four focuses on the locations of Titanfall 2. If you’ve dug into the game at all, you’ve likely noticed the wide variety of locales in the game. Rather than simply showing screenshots from the game, this chapter expands greatly on each area, showcasing a good chunk of concept art for the area and many of the objects in it. One of my personal favorites was the Crash Site artwork as it showcased natural beauty juxtaposed against the futuristic technology of a crashed ship.

The final section of the book covers the various in-game graphics you might spot in the environments, as well as the aforementioned pilot maquettes. These painstakingly-crafted models are incredible, and are easily the highlight of the entire book.

These maquettes are amazing.

If there is one counter to that high, it’s the fact that the Titan maquettes are not represented. I know they exist as I’ve seen them, but for some reason they aren’t on display here. Also, despite having been eviscerated by beasties in the campaign, there’s little background on them represented here. These two minor omissions are fairly easily offset by the plethora of other fantastic content.

I’ve been reviewing art books for years at this point, and it never ceased to amazing me just how much work it takes to bring even the smallest items to life in games like Titanfall 2. Art books like this one are a shining example of the wealth of used and unused artwork that make the games we play possible.

The Art of Titanfall 2

With 192 pages of full-color content, The Art of Titanfall 2 is a gorgeous look behind the curtain and worthy addition to any fan’s library.

Ron Burke is the Editor in Chief for Gaming Trend. Currently living in Fort Worth, Texas, Ron is an old-school gamer who enjoys CRPGs, action/adventure, platformers, music games, and has recently gotten into tabletop gaming. Ron is also a fourth degree black belt, with a Master's rank in Matsumura Seito Shōrin-ryū, Moo Duk Kwan Tang Soo Do, Universal Tang Soo Do Alliance, and International Tang Soo Do Federation. He also holds ranks in several other styles in his search to be a well-rounded fighter. Ron has been married to Gaming Trend Editor, Laura Burke, for 21 years. They have three dogs - Pazuzu (Irish Terrier), Atë, and Calliope (both Australian Kelpie/Pit Bull mixes).
Related Articles: The Art of Titanfall 2
Share
Tweet
Share
Submit