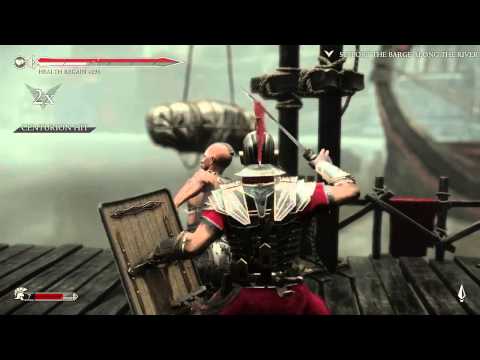 They say history is doomed to repeat itself. Indeed, it seems enemies will always put their explosive content in red, shiny barrels and bosses’ weak spots will always glow. Launch titles for new consoles tend to range from, in scientific terms, “meh” to “ugh,” and Ryse was no exception. The initial launch of Ryse on Xbox One was met with low scores and a host of complaints about framerate issues and shallow gameplay. Can Crytek’s handling of the PC port salvage the ship and make Ryse a strong PC title?

Most who are already accustomed with Ryse will find that the core tenets are largely unchanged. The game follows Marius, a Roman centurion with a dead father to avenge and a lot of people to slaughter along the way. The story takes some rather ambiguous twists and turns, but is really just a method for placing a larger variety of enemies in front of you.

Executions are visceral, but also constitute most of the game’s combat options

The story is a mixed bag of tired tropes with a few moments of brilliance. Moments like Marius leading his legion in the defense of a Roman settlement, siege towers and barbarian hordes looming in the distance, and the score soaring above the dull roar of war in motion are wonderful. It is the exact experience you’d expect from any game about Rome-era warfare, in all the best ways possible. The melodrama of Marius’ quest for revenge, however, is one part epic Roman war movie like the aforementioned siege, and one part B-movie cheese. The appearance of a certain goddess and the portrayal of the game’s true antagonists, the sons of the Emperor Nero, are a little over-the-top and cheapen some of the sweeter moments of victory in the game.

The combat of Ryse is one of the main focal points of the game, and sadly, also one of its most glaring flaws. Your options in combat are largely limited to your sword and shield, alternating in some counters and dodge rolls. The combat takes on an Arkham-style approach, but fails to capture the magic of it. There is no real variety to attacks, and often I felt like I was playing Dance Dance Revolution. This is especially true considering that for most enemy attacks and executions there are color-coded notifications of what button to press. Most of the gameplay is counter, attack, hit the execute button and beat the impromptu QTE.

You’ll fight in a variety of locales, from the forests of Britain to the very roads and alleys of Rome itself

As far as the rest of the gameplay is concerned, well, there isn’t much to talk about. You’ll occasionally get some sessions on the Scorpio, which is ancient Rome’s version of an on-rails turret segment. You’ll also have to deal with archers that are harassing your men, using erratic and difficult-to-aim javelins. Most of the game focuses on the fighting and executions, even the multiplayer, which is a simple wave-based battle set in the Coliseum. The sad part is, the executions are exciting to use, and for the first few levels, you’ll marvel at the brutality of them. The novelty wears off quick though, and you’ll find yourself wanting more than some QTE’s.

Graphics are another main selling point for Ryse, and at least in graphic fidelity, it delivers in spades. Ryse has a multitude of options for the PC user to show off their rig’s power, Anti-aliasing, supersampling, and 4k resolution settings are all available to beef up the visual quality of Ryse, and there are many beautiful locales in the game to show off those options. The problem with the graphics starts when you get into the game’s more action-heavy areas. Framerate is still an issue with Ryse, with my own setup (a 760 with an i5 and 8GB RAM) having difficulty breaching over 40 FPS on heavy action scenes, even with many of the bells and whistles turned off. Your mileage may vary depending on the strength of your rig, but keep in mind that this is clearly going to be a graphical benchmark of a game.

Commanding a legion of soldiers isn’t mechanically difficult, but is still an exciting escape from the continuous combat

All in all, Ryse is a solid game that holds itself back with its own simplicity.  A rather simplistic story would be fine by itself, but the disappointing combat and repetition of QTE’s make the game a little tiresome. The locales and graphics are beautiful, but can’t compensate for the repetitive fights. If you’re looking for a pretty brawler and aren’t concerned with gameplay depth, then Ryse might suit your needs. If you want a rewarding combat system or a little more tooth to your story, you might want to look somewhere else.

Beautiful graphics and scenery, but Ryse's combat fails to reach the level expected of modern brawlers. Worth a playthrough for action fans, but little lasting appeal outside showing off your rig's technical chops.