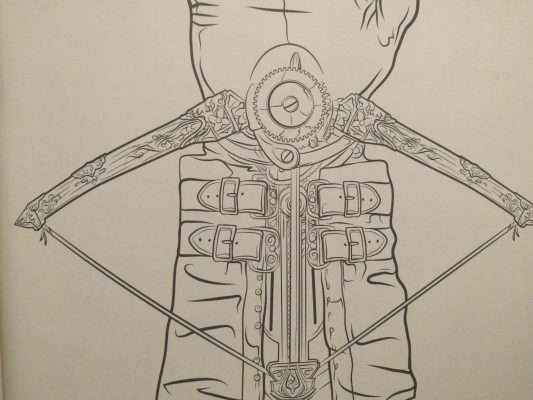 The words “coloring book” usually bring to mind blank versions of cartoon characters that kids watch on TV, or cheesey restaurant placemats. If you’re like me, you grew up laying on the floor and coloring with your BIG box of Crayola crayons. On occasion my mom would sidle up to me to color a side by side scene in our Smurfs coloring book. As an adult, I had forgotten how much fun it is to just slow way down and color. I took a moment and checked out the Assassin’s Creed Official Coloring Book from Insight Editions. Like an assassin, this coloring book had a few surprises up its sleeves.

Adult coloring books aren’t exactly new, though they are making a comeback. In the 1880’s, the McLoughlin brothers collaborated to create one of the first “painting books,” and in the early 1900’s these painting books were used as promotional tools, much like today’s childrens’ coloring books. The industry all but died off in the 90’s, but adult-specific coloring books have had a minor resurrection in the last five years, springing from the shadows of relative obscurity into a strong market in the last 12 months.

Assassin’s Creed is one of Ubisoft’s flagship titles. It follows the eternal struggle between the Assassins and their zealous enemies, the Templars. The games take place in beautiful locales in Jerusalem during the Crusades, the Italian Renaissance, the French Revolution, the open sea in the 18th century, and colonial United States. Each of these locations lend themselves to awe inspiring art. Insight Editions and Ubisoft took the pick of the litter and gave fans of the series the opportunity to color the world as they see fit.

Markers tend to bleed through.

The thick cardstock cover automatically tells you this is not a children’s coloring book, as it shows Ezio Auditore da Firenze leaping across a channel to kill his mark. The pages inside are of a nice matte paper stock that you can tell will take colored pencils and pens well. The detail in each page varies from vague backgrounds and the skeleton of a frigate, to the intricate linework of an interior room and the filigree needlework of Arno Dorian’s coat. If you aren’t sure how best to color a scene, the last fifteen pages of the book features full-color concept artwork and renderings from the Ubisoft artists themselves to guide you.

Paint comes out a little messy, but doesn’t bleed.

I colored my first page with pencils (my preferred method for highly detailed books), but I very quickly wished I had more colors to compliment the details. That thought was exacerbated as I selected another equally complex page.

I wanted to see how the paper stood up to ink, so I grabbed my markers. Unless I over-saturated a spot, I didn’t see a lot of bleeding through. However, you can see the colored image like a shadow on the flip side. I only did a small portion of that scene so I didn’t ruin the detail with my markers, but it does demonstrate that this is a coloring book best suited to colored pencils. Lastly, I grabbed my acrylic paints and chose a picture I thought might look good in that medium — King Washington upon his American throne. It came out a little messy, but what surprised me was that nothing bled through the page. While the markers bled through a bit, the heavier paint held far better than expected.

Some beautiful renders as guidance if you are so inclined.

The only drawback in this book I could see was the large two-page scenes. They are absolutely beautiful, as you might expect from something rendered from concept art, but the part of the image that falls in the crease is very difficult to color. This means you’ll end up with a blank line down the middle, or a darker line as you repeatedly try to fill that space.

The artwork is beautiful and detailed.

The retail price for the book is $15.99 on Amazon, but based on my time with it, it is well in line with other licensed books available. With 79 pages of colorable content, and exquisite imagery straight from the game, the book sets you free to reimagine it however you wish.

The Assassin’s Creed Official Coloring Book feeds my desire to slow down and enjoy the therapeutic benefits of coloring while offering me a challenge, thanks to the incredible level of detail. If you like to color, or are just a fan of the game (or perhaps both), this is a must have to add to your collection.

Ron Burke is the Editor in Chief for Gaming Trend. Currently living in Fort Worth, Texas, Ron is an old-school gamer who enjoys CRPGs, action/adventure, platformers, music games, and has recently gotten into tabletop gaming. Ron is also a fourth degree black belt, with a Master's rank in Matsumura Seito Shōrin-ryū, Moo Duk Kwan Tang Soo Do, Universal Tang Soo Do Alliance, and International Tang Soo Do Federation. He also holds ranks in several other styles in his search to be a well-rounded fighter. Ron has been married to Gaming Trend Editor, Laura Burke, for 21 years. They have three dogs - Pazuzu (Irish Terrier), Atë, and Calliope (both Australian Kelpie/Pit Bull mixes).
Related Articles: Assassin's Creed The Official Coloring Book
Share
Tweet
Share
Submit