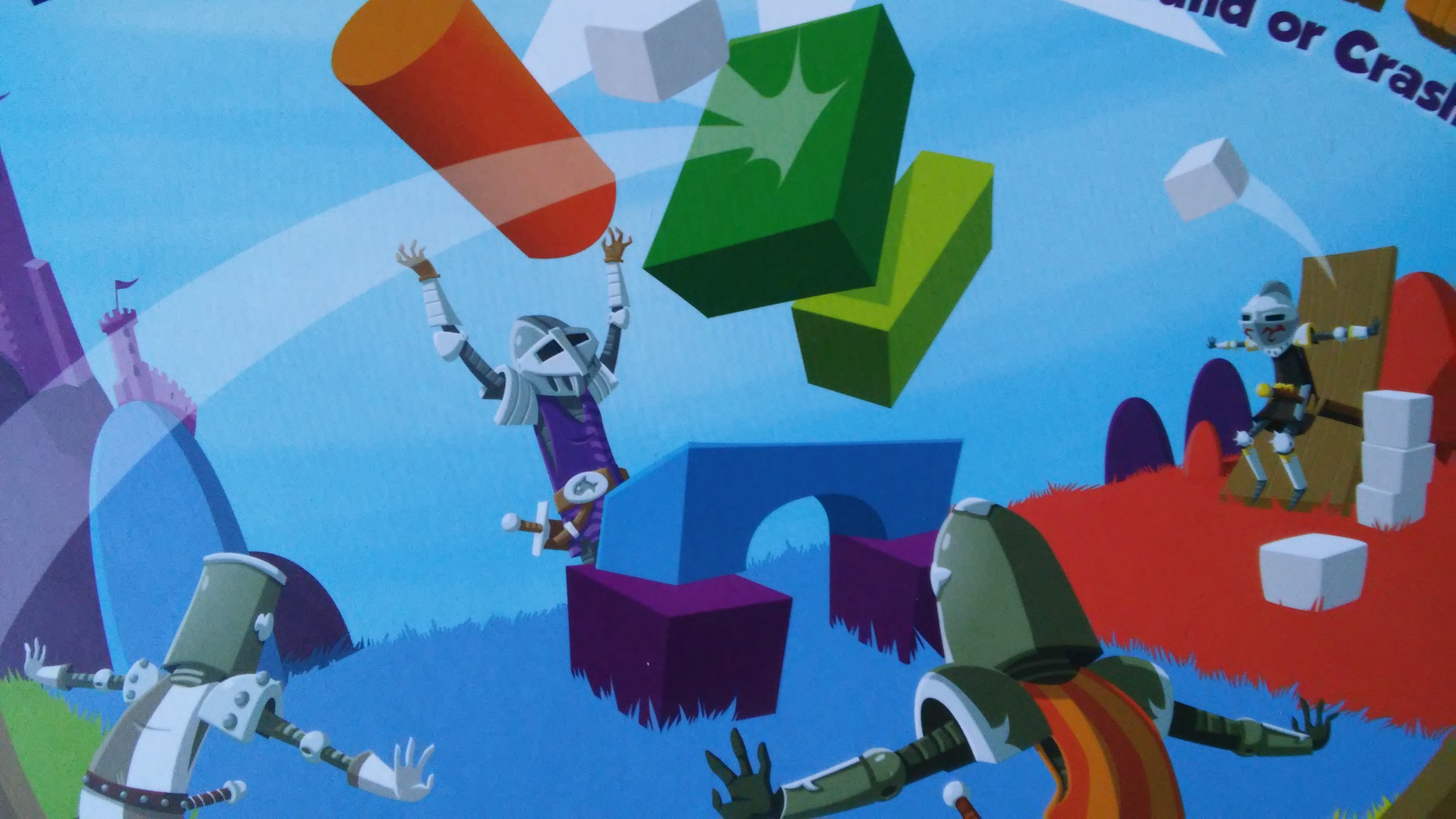 The duality between creation and destruction defines the human experience. We thrive on sacrifice and consume to exist. But that’s all a little dark for game night, so Kaboom lets you smash things, and smash’em good. The concept of Kaboom is simple: one person has 30 seconds to build towers out of small wooden blocks, and every other player is trying to destroy those towers with catapults. It’s simple. It’s intuitive. Its components and design keep it from, but its ambitions are low enough that they aren’t that difficult to achieve.

Kaboom takes place in turns, each player taking the role of the Master Builder while all other players are Saboteurs. You set up by placing down a series of Tower Tiles, which are blueprints you will use to create your towers, down at random as board in the center of your game table. Each tile depicts a tower you can build out of the multi-colored wooden blocks you have at your disposal. These tiles have various configurations which are worth more points the more blocks are required. The Master Builder’s task is to construct towers with the highest point value before the time limit runs out. These towers are all under threat, and you have to balance making larger ones that are more easy to disrupt over creating multiple smaller ones that will create more targets. There is a tower that requires the use of every block to make, and causes an instant win if it survives the round.

Complicating this are Saboteurs, the other players who will use small wooden launching pads to hurl blocks of their own towards the Builder’s towers, wrecking all of their plans. The Builder can rebuild once towers are destroyed, but doing so costs time and the stress mounts as blocks are being flung across the table. Saboteurs are limited, however. Each can only attack with a certain number of blocks per turn, and they have less the more Saboteurs there are. They have to decide whether to attack early and destroy the Builder’s plans or wait it out and eliminate costly towers.

That is pretty much everything there is to Kaboom, at least by design. The game is a challenge of dexterity, not of wits, and with a little more consideration that could be great. Why isn’t it? For one, almost all the towers consist purely of stacking. There are no interesting shapes that might be more or less stable, and you find yourself acting purely on instinct as you construct towers.

The catapults are another serious cause for concern. In order to give the Master Builder a fighting chance, they have to be a minimum of a foot away from the tower tiles. Unfortunately, their range seems to be a few inches unless you use excessive force. In most of my attempts they rolled lazily towards their targets instead of threatening them in the air. The only way to get the blocks to go anywhere is to slam your hand down onto the catapult, which is just as liable to flip it end over end than get the block anywhere. When you do so, the towers are more threatened by the shaking table than anything coming their way. You also have to be prepared to crawl around on the floor looking for blocks, because that will happen several times during every game of Kaboom.

The art on the catapults is appropriately zany, but their design gives them too little range of motion.

With no real strategy and components that rarely, if ever, work as intended, Kaboom still manages to thrive on pure chaos, at least when you are playing with a large group. With two to three people the insanity of Kaboom doesn’t come through as well. With four or five players the game hits its stride, when blocks fly everywhere and hopes get blasted to smithereens. There is a frenetic energy to Kaboom that keeps it engaging for the few minutes you play, and fun for its own sake worth something.

Kaboom hones in on a few simple gimmicks to make for a fast-paced game of building and destruction. Questionable construction keeps these mechanisms from really working, and the missteps show through, but there is still something fun to find amidst the frustrations.

John Farrell is a legal aid attorney specializing in domestic violence, living in West Chester Pennsylvania. You can listen to him travel the weird west as Carrie A. Nation in the Joker's Wild podcast at: https://jokerswildpodcast.weebly.com/
Related Articles: Kaboom, Tabletop
Share
Tweet
Share
Submit