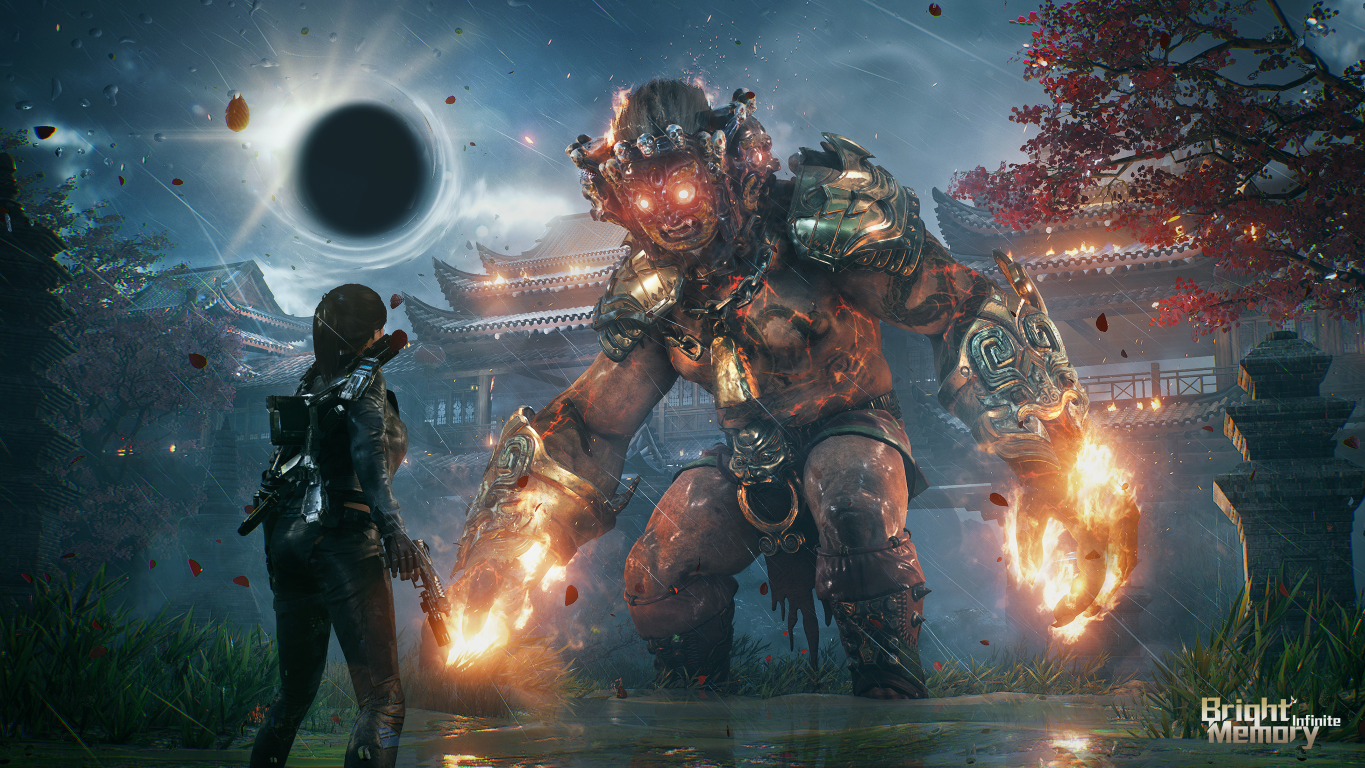 I’m pretty sure I’m not the only one who was astonished by Bright Memory: Infinite, the technical and graphical wonder of a game created by a single developer. It’s been on my mind ever since I watched the gameplay reveal trailer in what seems like ages ago now, and thankfully I had the chance to get my hands on it to see just how great it plays for myself.

Bright Memory: Infinite is the full version of its lesser prologue Bright Memory, which released last year. This is the better, fuller version with enhanced, incredible RTX-capable graphics and then some. The story follows our protagonist Shelia Tan, an SRO (Science Research Organization) agent who’s called to duty on New Year’s when a mysterious black hole appears out of nowhere filled with mystical, historical armored warriors. There’s also an enemy militia led by an evil general named Lin, who’s hell-bent on stopping Sheila from preventing the end of the world. As you can probably guess from my short, poorly explained story synopsis, there isn’t much of a narrative in Bright Memory. The story is lackluster and incoherent, the bosses often come out of nowhere, and the justification for the ancient armored soldiers appearing are brushed off to the player. The lead also has no personality, or rather, being the protagonist is her entire personality. The game’s conclusion is also jarringly instant and incredibly unsatisfying.

However, Bright Memory makes it clear to players from the get-go that it doesn’t care much about its narrative as the gameplay and graphics do most of the heavy lifting. As a hybrid fps, Bright Memory sports incredible gunplay that goes toe to toe with a game series like COD and Apex. There is no lag or delay in shooting. Each gun looks fantastic and has weighty feedback. There are no lousy weapons as each has its own purpose, and for the first time in a long time, I found myself using all tools at my disposal in a game. Mobility in Bright Memory is highly satisfying. Movements are swift and decisive. Sliding, wall running, and jump boosts all feel incredible and useful. Whatsmore, using your Light Sword to slice, dice, and pierce your enemies from afar or up close always feels satisfying. The melee attacks aren’t just for show either, as they do just as much damage or more to your enemies, especially after upgrading them. The (few) skills and upgrades available to players are also worth the time used to unlock them. These upgrades include jump attacks, charged attacks, running attacks, and air attacks that double as ranged attacks. Overall, the gameplay in Bright Memory is by far its best element.

In close second is the astounding graphics. While I played the game on a less than optimal RTX 3060 PC, the Ray Tracing capable GPU did its job presenting the best version of the game. The reflections are sharp, the visuals are incredibly crisp, and the models are extremely detailed. While the environments get a bit stale as you progress through the game due to the number of reused models, it is worth highlighting their remarkable level of detail regardless. I’d also like to praise the creativity and unique designs of the enemy models. Unlike the environments, each enemy type looked and behaved differently from the last and helped maintain the game’s engagement.

However, despite how impressive Bright Memory’s gameplay and graphics are, there are a few other faults with the game. The most memorable of which is its awful vehicle handling. While the suffering only lasted a short chapter, the experience was terrible enough to highlight. Additionally, the game’s bosses noticeably lacked consistency. After the first highly engaging boss fight, the rest become a tad disappointing as they lack creativity, especially the “Giant King,” which just involved running away from his AOE attacks and arenas filled with enemy mobs. While the last boss was visually impressive, it is basically still a combination of the first and final boss.

All in all, Bright Memory: Infinite is an incredibly mixed bag. The story is nonsensical and the bosses are a bit disappointing. However, the overall gameplay is immensely satisfying, and the graphics are incredible. Unfortunately, the game also doesn’t last very long, as my entire playthrough clocked in at around 3 hours. However, if you’re a fan of high octane action games to turn your brain off to, then this is the perfect game for you, especially at its less intimidating price of $20 for new players and free for Bright Memory players.

Bright Memory: Infinite is an incredibly mixed bag. The story is nonsensical and the bosses are a bit disappointing. However, the overall gameplay is immensely satisfying, and the graphics are incredible.

Abdul Saad is an avid gamer and computer geek. He's been writing for four years on news, reviews, previews, and more on multiple gaming sites. When he isn't writing or playing the latest JRPG, he can be found coding games of his own or tinkering with something electrical.
Related Articles: Bright Memory Infinite
Share
Tweet
Share
Submit