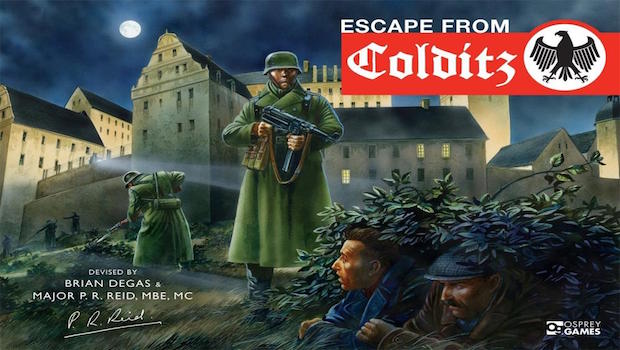 For anything to be considered a classic, it’s got to stand the test of time. Movies need to be enduring. Music needs to be timeless. What about board games? The term gets used for games that have been around for years such as Candy Land, Monopoly, and Checkers, but being classic isn’t restricted to mainstream titles. Osprey Games recognized this when they set out to update Escape from Colditz.

Originally released in 1973, Colditz was born from Pat Reid’s own experiences of escaping from the German castle turned prison during World War Two. You get to either recreate the daring escapes from Colditz as a POW or play the spoiler role as the German guards preventing escapees.

Osprey Games’ most important decision in bringing this title back to market was how to handle the original version. They decided to remain true to Reid’s vision and did not alter the gameplay. Instead, Osprey focused on making subtle changes by clarifying rules, tweaking gameplay, and modifying the board. In an age where change seems to be a constant, it was refreshing to see Osprey update the original rather than attempt to reinvent the wheel.

The tension builds as POWs move to gather equipment.

For those unfamiliar with Osprey, their main body of work comes from wonderfully illustrated books on military history. Their trademark attention to detail is evident from the moment you open the Colditz box. Game pieces are housed in a replica Red Cross box, similar to those POWs may receive. The pieces are wooden, the cards are wonderfully illustrated, and the board, while similar to the original, is more vibrant. Osprey also included a book that details the history of Colditz’s famous escapees. The entire package has a very vintage look to it, which adds to the game’s theme.

As POWs, your mission is to break at least two of your crew out of Colditz. You can construct ropes to scale walls, wire cutters to cut through fencing, documents to pass through checkpoints, or even steal the commandant’s car. You will also need an escape kit that contains clothes, maps, and other items needed once you’re free. You begin with just one kit. Anything else you need must be constructed by moving your men to various locations within Colditz’s walls.

This is handled through a roll and move mechanic using two die. You may scoff that a game today can be effective with such an antiquated mechanic, but there’s plenty of options available. You have several POWs at your disposal and may move as many of them as you want each turn. With a roll of seven, for instance, you may move one POW seven spaces, seven POWs one, or any combination thereof. A bad roll is not a lost turn, as rolls of five or less allow you to draw objective cards. These powerful cards can do things such as prevent you from losing a piece of equipment when the guards catch you, or allow you to use tunnels. Rolling doubles really opens the game up, as it permitsa reroll. You can then use the combined result, possibly allowing a POW to make a break for daylight.

If you play as the German guards, it may sound as if you have your work cut out for you, but the challenge undeniably lies with the POWs. The guards move just as the POWs move. Black guard posts dot the map; guards may jump to the nearby guard house, and then pop out again at a different post. This allows the guards to quickly react to a breakout on opposite ends of the board.

It’s quite a rush when a POW makes that final break for freedom with guards in pursuit.

The board is split into three areas: the inner courtyard, the outer courtyard, and the area beyond the fences. Initially, the game begins with POWs mulling about, getting themselves in position to get the equipment needed to escape. Guards can’t capture POWs at this point but must try to anticipate where a possible breakout may happen. Once POWs gather equipment or leave the inner courtyard, they are fair game for the guards. Captured prisoners are sent to solitary confinement and must remain there until a double is rolled. If a POW makes it to the end of one of the outside paths, he’s escaped.

The gameplay is simple enough for casual gamers to enjoy. Still, if introducing this game to someone new to the hobby, experienced players may want to temper their competitiveness as it may take a play or two before strategies become clear. Luckily, there’s a good amount of tension that builds up to make the game exciting for all experience levels. The run for daylight can be frantic as guards race to catch up to a fleeing prisoner. The game doesn’t take long to play, which is a plus as you’ll find that the POW side is a bit more fun. Still, the cat-and-mouse affair is entertaining enough when playing as the guards, especially for those who enjoy a little guess work in their games.

Colditz is a throwback that fits all the hallmarks of what makes a game successful in today’s landscape. It’s accessible to casual gamers, plays relatively quickly, has exceptional components, and provides a good challenge for experienced gamers. Osprey did well honoring the classic with this remarkable update.

Osprey's streamlined rules, historically themed components, and subtle changes to the original game make this a fantastic update. The cat-and-mouse game is more challenging than it looks but accessible to all levels of players.