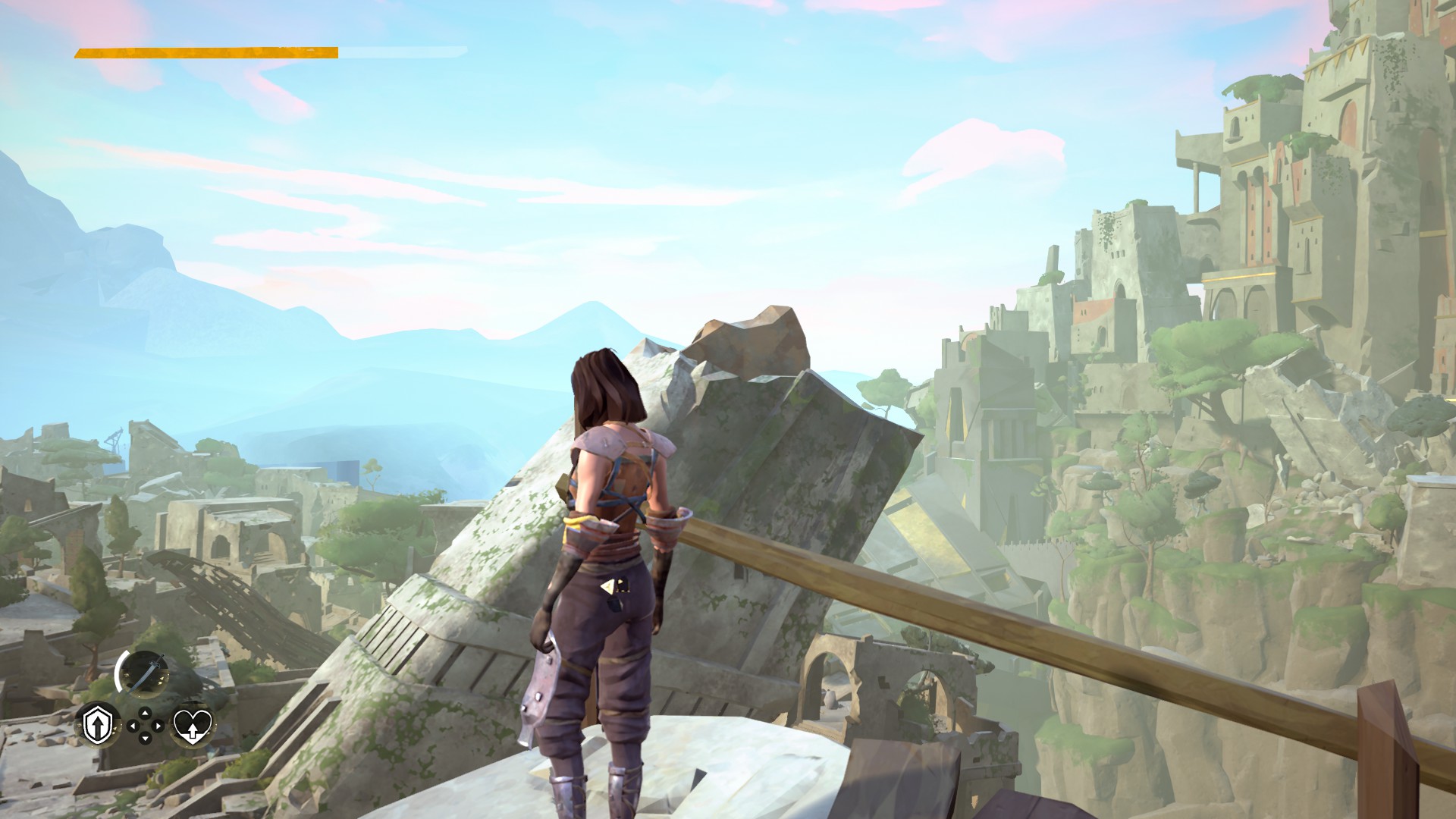 Norm Macdonald once said there were only two classes of competitor in skydiving: grand champion, and “stuff on a rock.” My experience with fighting games feels similar. From Street Fighter to Injustice: Gods Among Us, I’m either completely decking my opponent into submission, or getting juggle-combo-chained in a brutal beatdown that leaves me wondering if I ever had a chance at all. Absolver, oddly enough, has managed to break that chain. On the one hand, it provides a truly easy-to-learn combat system, both intuitive and potential-laden. On the other, even fighting against experienced opponents now feels like a learning experience, rather than the first five seconds after waking up from a head-on collision with a brightly colored Mack truck.

That Absolver is a different kind of game is made clear right away from the graphics. Compared to other games in the genre, Absolver could be accused of being downright underwhelming – colors are more pale and subdued, with environments that emphasize symbols more than substance. Even the fighters themselves are all just male and female humans with limited customization options. But what the game lacks in character-laden flash, it makes up for by providing an actual environment to explore, granting an open world as opposed to the strict level-based structure of typical fighters. And what a world! What environments lack in minute detail, they make up for in sheer awe-inspiring scale, presenting a world of mountains, ruins, forests and villages the player just has to stop and gaze at. It’s a lesson in how art can be minimalist without being dull.

But the environment, as well as the vague “spar your way to the finish” quest, is just setting the stage for the meat of the game: the combat. At heart, there are four stances a character can be in, and each of these stances has a sequence of attacks that the player can set up within them. Aside from the opening strike, each move needs to match the stance that came before or after it. So, if your initial attack ends in stance 1, you’ll need to follow it up with an attack that starts with stance 1 to continue the chain. To spice things up, every sequence also has an alternate attack available that can be unleashed at any time – allowing a given chain to be suddenly interrupted and switched off to a different sequence. As well, a given attack in a combo can be skipped with a feint – allowing the assault to continue, while still bypassing one or several moves that would have normally preceded it in the chain. This provides a surprisingly easy to learn system that still manages to maintain considerable depth and complexity. On paper, it’s brilliant.

It’s also brilliant in practice. The open world of Absolver offers plenty of opportunity to fight both NPCs and live players, who can seamlessly ease into and out of your game. Between those spontaneous fights (akin to the invasion system in Dark Souls, if not as dire) and the more orchestrated first-to-three matches, I managed to get in hours of testing Absolver’s combat. My experience? It works well. I’d routinely manage to get in some nice blows against experienced players who could (and admittedly would) clean my clock. I could learn from them. I could get ideas on how to go back and edit my deck of moves to make it better as well. And that means I had fun! It wasn’t just a one-sided beat-down in either direction where a player/victim is left mystified at what in the world happened.

There’s more to the combat – players can dodge and block, even parry. There’s several fighting styles, each of which offers a unique defensive spin to differentiate them. Gear can be acquired as loot, allowing characters to be further customized in stat-impacting ways. There are also special abilities, even weapons that can be summoned/picked up and specialized in, getting their own stances and customization. What this means is that there’s more ways to customize your character other than altering their move set. There’s also a level-system in play, complete with stats to raise, and moves to unlock by repeatedly going out and fighting either players or NPCs. This differentiates Absolver yet again from other fighting games, most of which tend to just grant every combat ability right out of the gates. Having to ‘earn’ these things makes it easier to learn the game, but it also means there’s grinding to do.

All in all, Absolver is a welcome, off-beat addition to the world of fighting games. It has a unique charm and a distinct setting, and a combat system that’s friendly to those just starting out, yet complicated enough to keep experienced players switching things up. For anyone who enjoys the thrill of going toe to toe with opponents in a combo-laden slugfest, this is definitely a title to pick up.

Combining gorgeous if deceptively simple graphics with an innovative approach to combat, Absolver is a welcome breath of fresh air to the sometimes predictable fighting game genre.

Victor Grunn has been a gamer since the days of single-button joysticks and the Atari 800XL. When not lamenting the loss of the Ultima series or setting people on fire in Team Fortress 2, he's an aspiring indie game developer and freelance writer.
Related Articles: Absolver
Share
Tweet
Share
Submit