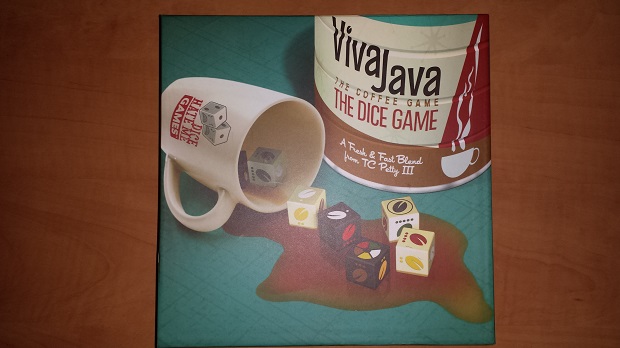 Alright, hang on a second. I thought that we all got together and decided that we don’t like dice. I thought dice brought too much randomness to games. I thought we all wanted games that emphasised strategy. This is why I own a bunch of Euro games, and there’s not a single die amongst the lot. I thought we had an agreement. Well, didn’t we? Now I see dice games all over the place. They’re everywhere. You all tricked me! People are lining up at Gencon to buy dice games! We were supposed to be better than this! Get off of my lawn and take your dice with you! Breaarrrrgh!!!!

Sorry, I got carried away there for a second. It is true that until recently, I didn’t own any dice games. I was haunted by visions of Yahtzee and having no decision making and losing to my mom. But then something funny happened sometime around last Christmas: I played King of Tokyo (c’mon, you knew I wasn’t getting through a review of a dice game without mentioning KoT. Might as well get it out of the way early). And guess what? I had fun. What? That wasn’t supposed to happen! It turns out that well designed dice games can embrace the randomness of dice, mix in some strategy, tack on a good theme, and be worth a spot on the table. I’ve played several dice games since my KoT conversion on the road to Damascus, and I’ve actually enjoyed a couple of them. Is today’s game, Viva Java: The Dice Game, one of them? As a matter of fact, it is. Well, kinda.

The premise of Viva Java: The Dice Game is to roll dice with different colored beans on them. The different beans can then be used in a couple of different ways. First, if you roll a bunch of beans of the same color, you can make a Featured Blend and score some points. You need to be able to beat the beans currently on the Featured Blend coaster in order to score it. For instance, if the featured blend currently has three black beans on it, you would need to roll four beans of a color to claim the Featured Blend coaster. Second, if you roll beans of all different colors, you can make a Rainbow Blend and score slightly fewer points. You don’t have to beat the current rainbow blend, you just claim the coaster from the person who has it. Finally, if your roll isn’t good enough to do either of the first two things, you can use beans of a color to Research. You use Research to unlock special skills such as rerolling or flipping dice over.

The real novelty of this game is the Research mechanic. If you roll your dice and you can’t claim either blend, don’t despair. Each color of bean represents a research track that leads to new skills you can use. For example, say you have a crappy roll that can’t beat the Featured Blend and can’t claim the Rainbow Blend. But you have managed to roll three yellow beans. You can use those yellow beans to score three spots on your yellow research track, which, depending on the game, can lead to something like the ability to increase each die by one or to block an action from happening for a turn. If you decide to conduct research using black beans, you are awarded one or more Flavor Dice, which can be played during you or your opponent’s turn and allow you to improve your own roll or piggyback on an opponent’s scoring.

The cunning among you will notice that rerolls are one of the things that need to be researched before a player has access to them. Does that mean that the game doesn’t initially utilize the Yahtzee mechanic, where you roll, set aside some dice, reroll, set aside some more dice, and reroll again? True, and the lack of the Yahtzee mechanic is a real plus for me. It’s almost like we just assume that it will be there when you play a dice game. It feels good to play a few rounds with just one roll per player. Although, eventually, a player can earn the Yahtzee mechanic, as rerolls are one of the things that you can research. And you know, I complain about the Yahtzee mechanic, but I’ve earned it every single time I’ve played this game. If I hate it so much I could just earn other things. Why do I run back to that which I hate, when this game gives ample opportunity to do other things? Do I enjoy annoying myself? Do I not feel like I deserve to play a dice game without the Yahtzee mechanic? Whoa, things got kinda introspective for a second. At any rate, it’s refreshing to start the game with one roll being all you get. Those so inclined can research frantically for rerolls, others can do other things. I’ve seen people win the game without so much as a single reroll, so no one is forcing anything on you.

We’ve got ourselves a decent little game here. There’s some strategy to keep things interesting. There’s a little bit of player interaction with the Flavor Dice. You can change things up by swapping out different research skills. Although I’m just going to save you the time and tell you to play with both the Wild and the Intern options. It’s the most complicated way to play so it takes a second to get used to the setup, but it is the best way to play. I should also mention that the components are very nice. The art is clean and nice looking, and everything is of good quality.

So what’s the downside? There’s the usual dice game complaints. If you roll like crap, you have no shot at winning. There’s a lot of time spent watching other players roll dice. But really, this game suffers from the biggest current dice game complaint: it isn’t King of Tokyo. I hate pulling that card, but I have to. In mid-to-late 2014, that’s just the landscape for a dice game. KoT is the monster in the room, so to speak. And Viva Java: The Dice Game isn’t as fun as KoT. I’m not going to do a point by point comparison, but, at this point, if I’m gonna roll dice, I’d rather go balls out and attack my friends with some giant monsters.

For those of you who are reading this and rolling your eyes at me because you’re already tired of KoT, the good news is that, pretty soon we’ll be comparing all dice games to King of New York instead of King of Tokyo. And after that, the inevitable backlash will set in and the cool kids will turn their noses up at KoT and KoNY and reach for something else. Whispers of “Ameritrash” and “too random” and “I need more strategy” will be heard. My shelf full of dice-less Euro games will become relevant again! Just you wait! Breaaaarrrrgggh!!!

Published By: Dice Hate Me Games

This is a good, solid, fun game. There’s good strategy for a dice game, and there are multiple paths to victory. The game suffers from being compared to King of Tokyo. Perhaps this is unfair, but them’s the breaks. This is a game I plan on playing more of, and that’s more than I can say about a lot of games.