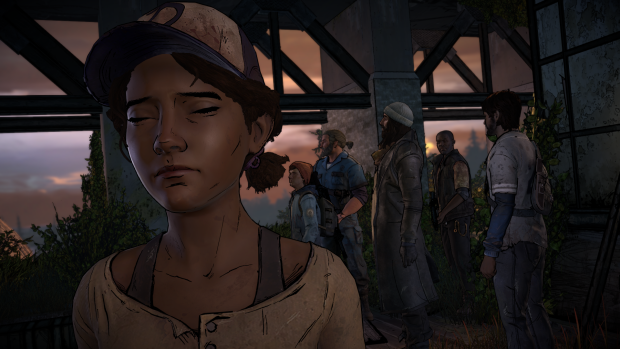 The Walking Dead – A New Frontier: The Ties that Bind Part 2 builds on the action-packed first episode of the season three premiere. The game starts off right after the tragic moments that ended the first episode, and sets the pace for the rest of the season. Most of The Ties that Bind Part 2 is spent trying to recover in the aftermath of part 1. Javi has to choose what path he believes is best for his family’s survival, while weighing the new friendships he has made and determining who he trusts and who to let go.

The episode focuses heavily on building relationships with some of the newer characters, such as Trip and Jesus, while still spending enough time on the series mainstay Clementine to keep fans of the series interested. Javi’s relationship with Clementine is tested at times. As certain information from Clementine’s past is brought to light, I had to decide if Javi would still trust Clementine or move forward with some of his new acquaintances, which really brought Javi into his own as a lead. I was no longer tied down to Clementine and had no reason to treat her any differently than I would any other stranger in the game’s world.

Javi and Clementine standing over a grave

In Ties that Bind Part 2, I feel like I really got to start seeing who Javi is and how he and his family have survived for so long. The kind, family-oriented man that I had played in part 1 has to make a series of hard decisions that really fill out the character, and add depth to the already interesting new lead. There were a few points in the episode where I had to choose how to react when people were giving me ultimatums, and some of the options felt very true to the series in their grim weight. Letting someone else die to save myself, for instance, seemed to be against Javi’s moral code, but in this new world what he would do.

While the choices I got to make didn’t seem to affect the outcome as much as I would like, they do an incredible job of developing Javi’s character. I found myself making decisions more on how I thought Javi would react, rather than worrying about what might have the best outcome, and in this episode there are a plethora of points where Javi is tasked with some very character testing decisions. This is a great improvement over the previous season where many of the characters lacked any semblance of a compelling personality or backstory, and never came across as anything more than dull tagalongs.

Javi helps Kate with a cut

Part 2 continues the flashbacks that we saw in the part 1, which are used to help bridge the gap between season two and three for Clementine and create a deeper backstory for Javi. Fortunately the flashbacks seem to be much more relevant in part 2 then they did in part 1. Javi’s flashback allowed me to build a closer relationship between him and Kate, and add even more tension between him and David. Clementine’s flashback, while still one of the lower points of the episode, felt like I was actually making important decisions that would affect the rest of the season, unlike part 1’s flashbacks which are much more linear, and felt more like cinematic sections than actual gameplay.

The gameplay in the episode doesn’t improve much over the first; the only real puzzle-style gameplay that takes place is collecting items in an area to operate a winch. While I did have to explore a little bit to find the items that I needed, most of this felt like more of the same from the first episode, and was still essentially busy work. On top of that, the area I was in was quite small and completing this task took me no more than a few minutes.

The length of the episodes in The Ties that Bind is just as big of a problem in part 2 as it is in part 1. I was able to beat both parts in relatively the same time, which was just around an hour. I was disappointed by this, as I expected the episodes to be at least double in length, like some of the other Telltale games I have played in the past. I think Telltale could have easily combined the first two episodes into one, and given us an additional episode down the line.

The story in part 2 sets up what looks to be a promising season for the Walking Dead a New Frontier. I was pleasantly surprised to see the game follow up the devastating ending to part 1 with such a hard hitting and powerful second episode, full of its fair share of deaths and shocks. The connection I felt with Javi is much more real than with the majority of the characters from season two and the narrative of the series seems to be back on track for the first time since season one.

The Ties that Bind Part 2 is an excellent ending to what was already a great premiere to season three. While a little on the short side, the overall experience is memorable and has me anticipating the next episode.