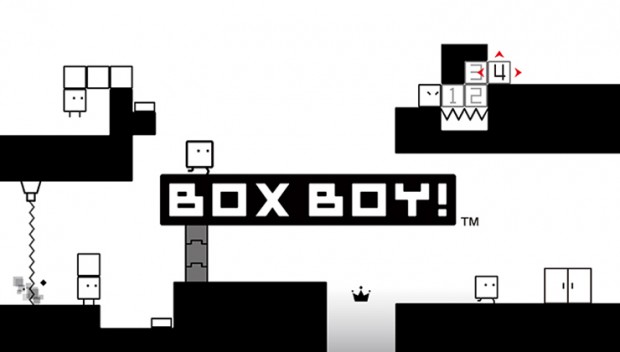 BOXBOY! is one of those titles that is so simple in nature that it’s surprising that a full game can be made of it.  At first glance, it is so straightforward that it’s hard to imagine how the rest of the game can go on without becoming monotonously boring.  Thankfully, not only does BOXBOY! not stumble into that pitfall, the game’s simple nature carries it a surprisingly long way and gets a lot of mileage despite its simplicity.

In BOXBOY!, players control the four-sided character, Qbby, in a 2D puzzle platformer.  Qbby is shaped like a square and has the ability to produce boxes from his body in order to progress to the end goal in each stage.  Manifesting boxes out of thin air is quite easy, but mastering where and when to use them becomes the key to each stage.  Throw in the fact that each stage has a limit to the number of boxes that you can create at one time, especially when all boxes must be connected at all times, and the puzzles become quite addicting.

The deceiving element of simplicity is probably what stands out as the most enjoyable part of BOXBOY!  Yes, the mechanics are incredibly simple, but BOXBOY!’s puzzles grow increasingly difficult the further you get into the game.  While the early stages have players simply using boxes to build bridges to cross gaps or stairs to reach high platforms, later stages throw some devious mix-ups to the formula.  Laser beams, conveyor belts and cranes are but a few of the elements that will leave you scratching your head.  It really is quite amazing how the game can squeeze so much out of so little.

The visuals are incredibly simple as well.  The entire game is completely in black and white, and everything in the game feels like it is aligned in a grid, which is probably because it makes simple box placement all the more easy.  Its simple appearance is reminiscent of a game that you could have found on the original Game Boy many years ago, and with the game’s simple presentation, it plays a lot like one too.  While a game that looks this plain may not be too flashy, the visuals admittedly work well for a game of this type.

The sound, on the other hand, grows repetitive quite quickly.  The midi-style music fits well with the overall old-school theme, but there are only a small handful of tunes in the whole game.  There’s nothing inherently wrong with the music, but when there is only a single song that plays throughout all of the game’s levels, it will strain on you quite quickly.  It never got in the way of my enjoyment, but I definitely wish there were another song or two.

Content-wise, BOXBOY! has a fair amount.  There are over 100 stages to conquer, some of which are noticeably more difficult, and thus longer, than others.  Every stage also has one or more collectable crowns which can be quite difficult to earn in some of the more mind-bending levels.  Each of these crowns earns currency which can then be spent in the game’s shop where Time Attack and Score Attack levels can be purchased, as can some skins, but there’s nothing too game-changing to be found there.  All-in-all, there’s a fair amount of content that should satisfy players, but after an initial playthrough, there’s unfortunately not much to keep you coming back.

BOXBOY! proves that even the simplest of concepts can make for some entertaining games.  The old-school feel is refreshing, and thankfully the game is surprisingly deep despite its straightforward approach.  It doesn’t have a lot of pizzazz, nor is it very action-packed, but there are some satisfying puzzles here that are definitely enjoyable.

BOXBOY! is a fun puzzle platformer that gets a lot of mileage with a simple concept.

Gaming Trend's resident amiibo collector, Matt's a lifelong gamer with a soft spot for Nintendo. As a new father, Matt often struggles to stay as involved as he has been in years past but can always be counted on to come back for some engaging geeky conversations. A resident of Philadelphia, he is currently working on building up his Man Cave with all things Marvel, Star Wars, and Video Games. As an old-school gamer, Matt firmly stands by his belief that gameplay will always be more appealing than story.
Related Articles: BOXBOY!
Share
Tweet
Share
Submit