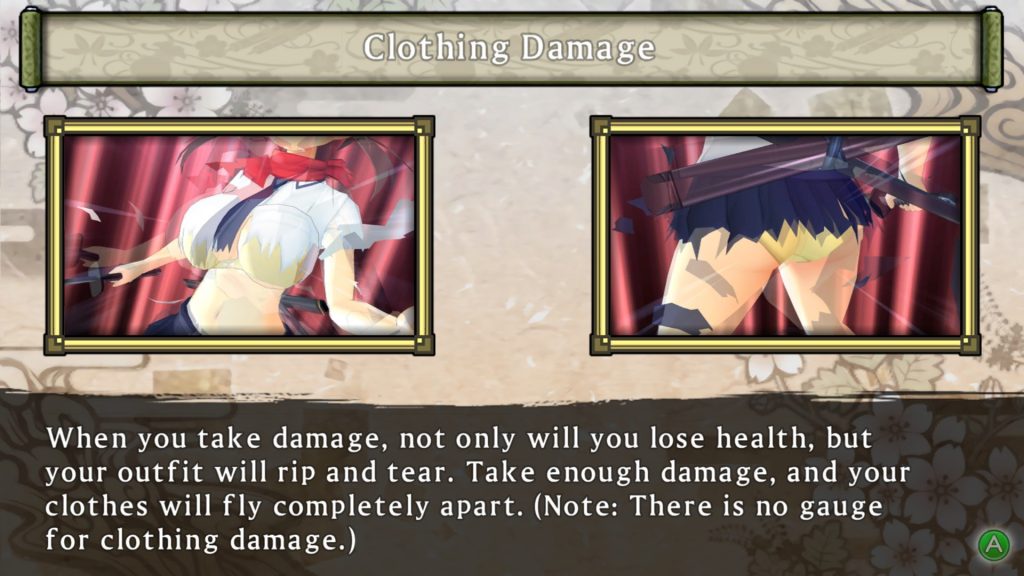 Senran Kagura Shinovi Versus (hereafter SKSV) is a game bursting at the seams with shamelessness and T&A – but mostly the T&A. Developed by Tamsoft of Hyperdimension Neptunia fame, the game is a straightforward and unlock-heavy take on the 3D beat-em-up genre. So what do you get when you mix a watered-down action-fighter with a ridiculous anime-themed story and absurdly sexified (if still PG-13) game mechanics? Honestly, you get exactly what you’d expect: pure, simple, ridiculous fun. Maybe not everyone’s kind of fun, and maybe not the kind of fun you want to let anyone know you’re having. But “crazy anime ninja-girls getting into brawling catfights” is as straightforward a recipe for entertainment as any, and neither developer Tamsoft nor publishers XSEED / Marvelous USA have gotten in the way of that.

SKSV is the third entry into the Senran Kagura series, a light-hearted world of uniformly bouncy ninja girls from a trio (later, a quartet) of rival ninja schools. Their overabundance of school spirit traditionally comes to a head in the Shinobi Battle Royale, where one school invades another – and a successful invasion means the winner can burn the entire school to the ground. SKSV allows the player to experience this conflict from the perspective of four schools, each decked out with their own selection of unique characters, personalities, and highly tearable, lingerie-revealing outfits.

Get ready to see those two particular camera angles over and over again.

Normally, one would expect that the whole ‘tearable outfits’ thing to be offered up with a bit of a sidelong glance and a superficial justification. ‘Hey, get in a rough fight and clothes gets ripped, armor gets torn off!’ a developer will say. ‘This isn’t about sexiness, it’s just more realistic!’ Tamsoft bypasses the excuses and just makes it evident: this game is intentionally, blatantly, absurdly over the top with bouncing breasts, shaking asses, easily torn outfits and fetishy uniforms. Every given fight against a prominent shinobi will result in multiple incidents of impromptu stripping, and I’m pretty sure there’s no way to lose a given level without your character ending up on the floor, knocked out and in their underwear. And the jiggling? It’s not just something that shows up during a fight. Characters jiggle absurdly when they walk around. They jiggle in cutscenes. There’s a shop where you can spend in-game currency accrued from beating levels, and the shopkeepers’ breasts wobble with intensity the moment she makes her appearance, which I suppose is a kind of in-character advertisement since she mostly sells lingerie for your characters to wear.

If you’re the sort of person who ‘harumphs!’ at sexiness in games or who laments the injustice or indignity of it all, SKSV functions as a kind of moral cyanide tablet in digital download form. But if you can get past the breasts – easier said than done – there’s something else that this game has going for it: the setting, the characters, the story, and the package are all just surprisingly charming. It’s silly, dumb fun of the least-serious variety, even when the game is trying to present a dramatic moment about one or another character’s backstory and interactions. The characters, each retaining their original japanese voiceovers, are a mix of unique personalities and outfits, having their own motivations and reactions to what’s going on in the world around them. The translated text flows well, making it easy to follow along with the admittedly shallow goings-on. SKSV is a game you play to laugh at and with, with the sexual overtones seeming to have less to do with S-E-X and more to do with getting a cheap laugh or two. For some, it’s going to pull that off in spades.

There’s an abundant amount of story here, covering both the conflicts from each schools’ perspective as well as some side-story character development for the playable girls. Said story has to unfold in more than cutscenes, though, and that’s where the gameplay comes in. SKSV has a kind of dumbed-down Dynasty Warriors style beat-em-up gameplay experience on offer, with characters running around in full 3D as they beat up swarms of rampaging ninja schoolgirls. Each girl has her own signature moves and starting style, along with a level-up system that unlocks additional powers and higher statistics for her. In truth, the whole thing is a bit on the simple side: even with multiple difficulty levels, I didn’t have much trouble stomping my way through each mission while relying mostly on the most basic of attacks. On the other hand, each romp through a given mission results in a rating based on how efficiently you doled out some clothes-ripping brutality, so true perfectionists still have something to shoot for even if they find their way flying through the game’s considerable chunk of content. Each character not only has their own style and moves, but also a shinobi transformation which powers them up, heals them, and opens up additional combat possibilities. It’s not the deepest or most innovative experience in the world, but it does a decent-enough job of providing mindless ass-kicking content.

Beyond the missions (both revolving around the schools and the 20+ individual girls), there’s a lot of other content to play with. A training mode allows for some simple practicing and learning a given shinobi’s abilities, if the need arises. There’s multiple online multiplayer modes, including one which involves ‘racing to grab the most falling undergarments from the sky’. There’s a shop for spending in-game currency on, allowing art, cutscenes and a pretty big assortment of clothes to be unlocked. For someone who gets into the kind of mood that SKSV is offering, there’s a whole lot to do and experience, and the game frankly does more to try and earn its $29.99 price than many other offerings on Steam. At $19.99, it’d be more straightforward of a steal, but it has the advantage of being packed with all of the DLC that it originally launched on the PS Vita with.

No, ‘Flash’ does not mean what you think it means. Good guess though.

There’s a few downsides to the game, charm aside. It’s bit on the easy side of things, and the gameplay never seems to get as wild and intense as a beat-em-up should be. No sprawling massive conflicts a la Dynasty Warriors, despite the straightforward similarities between the two games. The graphics are also a little less impressive than the norm, likely due to hailing from a handheld system originally. As mentioned, the $29.99 price tag seems a bit high for whats on offer, and my experience was that a controller was pretty well mandatory in order to have an enjoyable experience – not exactly an unheard of peripheral for PC gamers nowadays, even though I’ve always been more of a keyboard + mouse sort of guy.

But all in all, Senran Kagura Shinovi Versus has turned out to be a surprisingly fun experience. It’s dumb, immature fun with a distinctly japanese approach to shamelessness, and for some gamers, that’s just what the doctor ordered.

Bursting with sophomoric charm and absurd sexiness, Senran Kagura Shinovi Versus will provoke either cringing or laughter depending on who's playing it. What it lacks in maturity it makes up for with a refreshing lack of seriousness, and it presents it all in a content-laden game filled with easy, straightforward 3D ass-kicking.

Victor Grunn has been a gamer since the days of single-button joysticks and the Atari 800XL. When not lamenting the loss of the Ultima series or setting people on fire in Team Fortress 2, he's an aspiring indie game developer and freelance writer.
Related Articles: Senran Kagura Shinovi Versus
Share
Tweet
Share
Submit