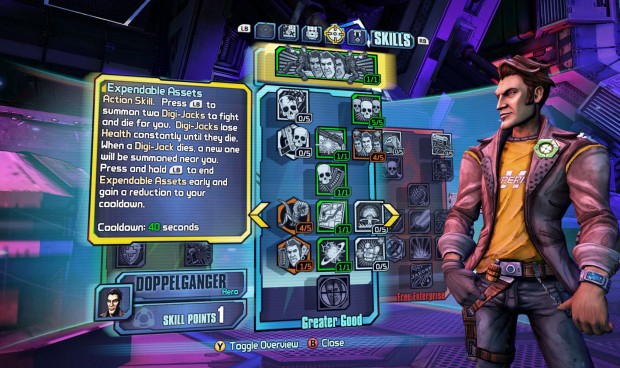 I don’t think that there are many gamers who still haven’t played Borderlands yet, so I’ll keep this brief: Borderlands 2 and Borderlands: The Pre-Sequel are two great games that come together to be even better than the sum of their parts in Borderlands: The Handsome Collection. Although this collection is more of a port than a “remaster,” several improvements have been made to each title that make this package a must-own for any fans of the series, or those who are considering joining the party late.

Borderlands 2 and Borderlands: The Pre-Sequel are both great games, and that hasn’t changed in Borderlands: The Handsome Collection. The story and humor is superb, the gameplay is hectic and hilarious, and there are few cooperative experiences that even come close to being as enjoyable. You’ll spend hours customizing your skill trees, finding millions of unique weapons, and generally making the world a better place by way of bullets.

So what has changed? Well, the most notable upgrade is the inclusion of 4-player splitscreen co-op. Borderlands 2 and Borderlands: The Pre-Sequel both could previously only support 2 players on a single screen, which meant that if you wanted a full party, you’d either have to hop online or buy two separate consoles, and two copies of the game. This is a huge improvement for those with three buddies closeby, and a television large enough to make the experience enjoyable, like myself.

Unfortunately, while Borderlands 2 manages to support 4-player co-op quite well, there are noticeable performance issues on Borderlands: The Pre-Sequel. This is likely due to the fact that Borderlands: The Pre-Sequel came out several years after Borderlands 2 and was more technologically demanding. Multiply that by four and it’s easy to understand the occasional drop in framerate. Also, opening the menu shows you a fairly small percentage of the window at a time, and you have to slide around from quadrant-to-quadrant.

Aside from the framerate issues in 4-player co-op though, Borderlands has never looked or played better. The game has been upscaled to 1080p and 60 frames per second, plus had some more advanced textures added to make the whole experience look as good as any PC version I’ve seen.

The most impressive thing about Borderlands: The Handsome Collection is the sheer amount of content it delivers. Every single piece of content that was ever released is present, including the very-recently released “Claptastic Voyage” DLC for Borderlands: The Pre-Sequel. For only $60, this collection provides more value than most re-releases we’ve seen.

Borderlands: The Handsome Collection is the victory lap that every Borderlands fan will enjoy, and packs a tremendous value into one disc. Some performance issues hold it back from being flawless, but all the ingredients are here to sate your chaotic sweettooth.

You know that jerk online that relentlessly trash talks you after every kill? That guy was probably Travis "Tie Guy" Northup. Competitive, snarky, and constantly wearing a tie, Travis has been writing his opinions about electronic media since he was a teenager, and is pretty much the only person to hold his opinions in high regard.
Related Articles: Borderlands: The Handsome Collection
Share
Tweet
Share
Submit