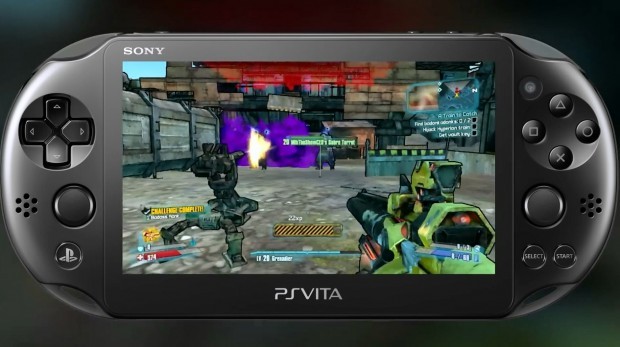 As a major fan of shooting things and low-brow humor, Borderlands 2 instantly became one of my favorite games when it launched in 2012. I spent so much time on the couch playing Borderlands 2 that I could barely contain myself when I learned that Gearbox had plans to allow me to play it off of the couch as well with my Playstation Vita. Now that I’ve had my chance to play the game, I’m happy to say that the experience remains mostly intact despite sacrifices having been made due to the Vita’s technical limitations.

For those of you who never had the pleasure of experiencing Borderlands 2 (and that has to be a very small group by now), it’s a first-person shooter RPG that takes on Pandora: a futuristic wasteland full of psychopaths and monsters. The player takes on the role of a vault hunter–a gun-toting badass that searches for riches and revenge against the egomaniacal Handsome Jack. If you haven’t figured it out yet, it’s a bit of an over-the-top experience full of profanity, violence, and humor.

The port of Borderlands 2 to from consoles to the handheld Playstation Vita is a pretty daunting undertaking given the title’s scale, and the good news is that the bulk of the experience has made the transition successfully. Borderlands 2 on the Vita contains the Borderlands 2 core game, all six of the playable characters, and even some of the DLC. Even better, is that the Vita version has cross-save functionality, so you’ll be able to pick up where you left off if you own the PS3 version of Borderlands 2 with all of your same equipment, guns, and skills.

The transition from console to handheld isn’t without drawbacks, however. For example, while the graphics remain mostly intact, you won’t see as many enemies on-screen as you would in the console version. Large maps now never have more than 6-7 enemies simultaneously, and enemy spawn times are staggered so that you fight them in waves. Also, when these enemies die, they will burst into a splash of blood and disappear instead of ragdolling to the ground. There are many small changes like these that are understandable given the difficulty of porting such a huge game, but it is a bit of a downer if you’re used to the console version.

The sound in the Vita version of Borderlands 2 is similar to the graphical presentation in that it remains mostly intact, while being not as good as the console version. All of the same sounds and memorable voices remain, but the sound occasionally pops and crackles. This isn’t a major issue when it comes to the character voices, but it happens during the gunplay and explosions pretty regularly. Handsome Jack is still as hilarious as before, but you might have a hard time hearing him over the popping sound when you shoot an exploding barrel.

Even worse are the load times, which are exponentially longer in the Vita version than on the console. Every new area gets its own loading screen, as is the case with the console version, but these load times are now so long that it is more than a minor annoyance. I clocked one loading screen as lasting longer than 90 seconds before I fell asleep (it was late, okay? Sheesh!).

The biggest drawback of Borderlands 2 on the Vita, though, is it’s minimal multiplayer experience. Cooperative play is at the core of Borderlands 2’s design, and on the Vita you will be limited to two players, instead of four. This is no doubt another change that was made out of necessity since the technical abilities of a portable device are limited, but the Borderlands 2 experience feels greatly reduced with such a major piece of the puzzle missing.

The controls are also a little troublesome. Most of my gripes have to do with the design of the Vita itself, like the fact that the device itself hasn’t gotten any easier to hold, so Gearbox can’t be blamed for a lot of it, but it was not an easy hurdle to get past. The touchpad on the back of the Vita was my major issue, as it is with most games I’ve played on this device. Players use the left side of the back touchpad to start sprinting, and the right side of the touchpad to initiate melee. This means that accidentally touching the back of the Vita will result in beginning or ending a sprint, or using fisticuffs when you don’t mean to. This was REALLY annoying and it took me awhile to figure out how to hold the Vita in a way that would minimize these hiccups.

Despite the long list of drawbacks, we’re still talking about Borderlands 2 on a freaking portable device, and I don’t want it to sound like I underestimate the gravity of this development. As a huge fan of Borderlands 2, I am looking forward to playing it on the bus after work each day, and then picking up where I left off on my PS3. Iron Galaxy has made a valiant effort to port such a huge experience to the Playstation Vita, and I think that the sacrifices that were made to make that port possible were necessary. Although this also tell me that the technology may not be there to do these kind of ports yet.

Borderlands 2 feels like a great achievement for the Vita in that most of the core experience has transition to the handheld device intact, but it still feels like an incomplete, poor-man’s version of Borderlands 2. If you’re itching to return to Pandora, then this will give you another way to play, but you’ll need to play it on a console to get the full experience.