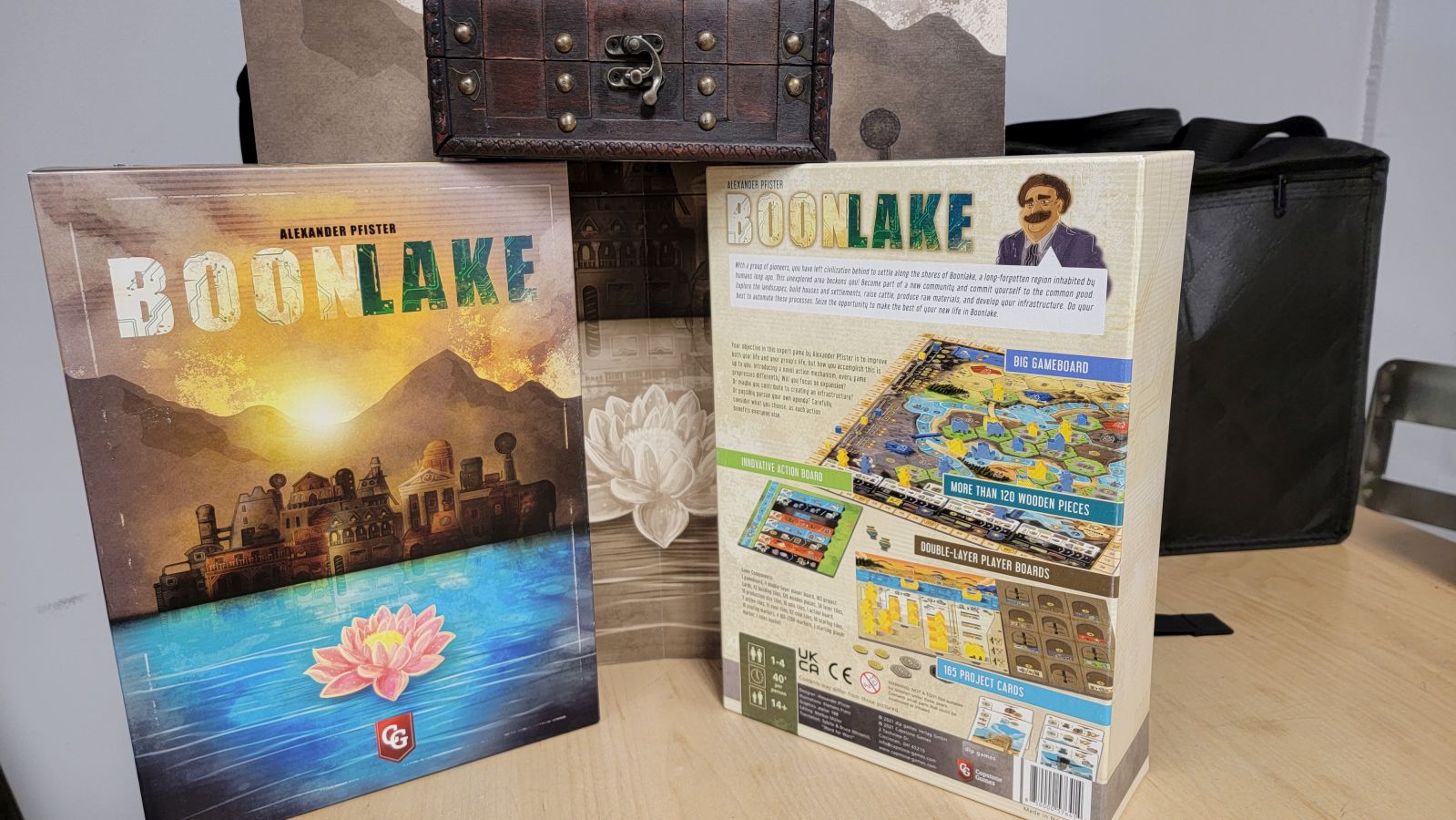 Ever wondered what it was like to be the first people to settle an area of land? If so then Boonlake might just be the game for you. Well that and for many more reasons that I will dive into here. What can seemingly be classified as yet another worker placement game stands out above that moniker and sets itself apart from many others in the genre. Created by Alexander Pfister and published by Capstone Games, Boonlake is a 1-4 player game about settling the area known as, well you guessed it, Boonlake. The game boasts a 40 minute playtime per player, and that is more or less accurate. Notable here is Alexander Pfister for many of his other games like Great Western Trail, Maracaibo, Cloudage, and now Boonlake.

In Boonlake players will strive to settle the land and gather resources and make use of the river that they travel down and ultimately try to score the most points by settling the land the best. In true Alexander Pfister fashion it is a heavier game and not for the faint of heart, but still an immeasurably rewarding experience. That being said the game could benefit from a little bit clearer rules, some more notoriety, and a bit clearer terminology. 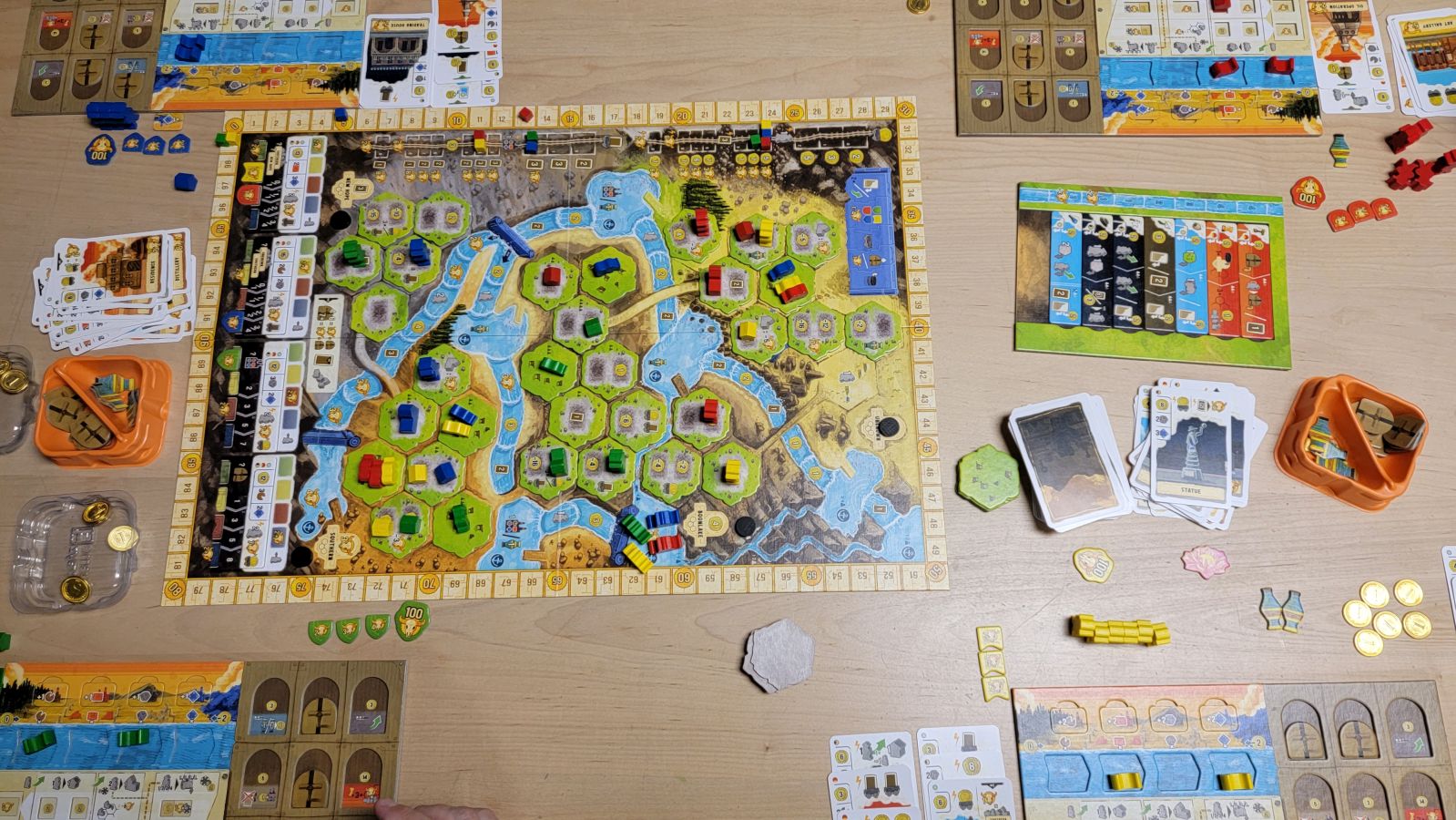 A game of Boonlake takes place over many rounds. A round consists of each player getting to do an action once with the game’s unique and exciting action selection feature, but more on that later. Once this occurs a round has passed and the game continues. The heart of the game progresses until a player triggers one of the game’s four scoring phases. It is in these four phases that the game shines bright and drives many of the players decisions throughout the game as scoring happens four times but scoring is also different each time.

To begin the action selection process is a fairly unique one and ties in nicely with progressing the game further along. There are several different action tiles that sit on the action selection board and when one is taken the player who chose the tile gets to either play a card or discard a card for money. Once that is done the player takes the main action depicted on the tile, followed by the supplemental action that all other players get to also take. Then at the end players may either typically play a card or discard for money as well. Not all tiles have the same actions, in fact each tile has different actions and also dictates the different types of cards that can be played before the main action. The supplemental card that gets played is typically of any type the player chooses. Once the tile is utilized players then look at the space of where the tile was removed from and move that many spaces along the river collecting whatever benefit is on the space they land on. 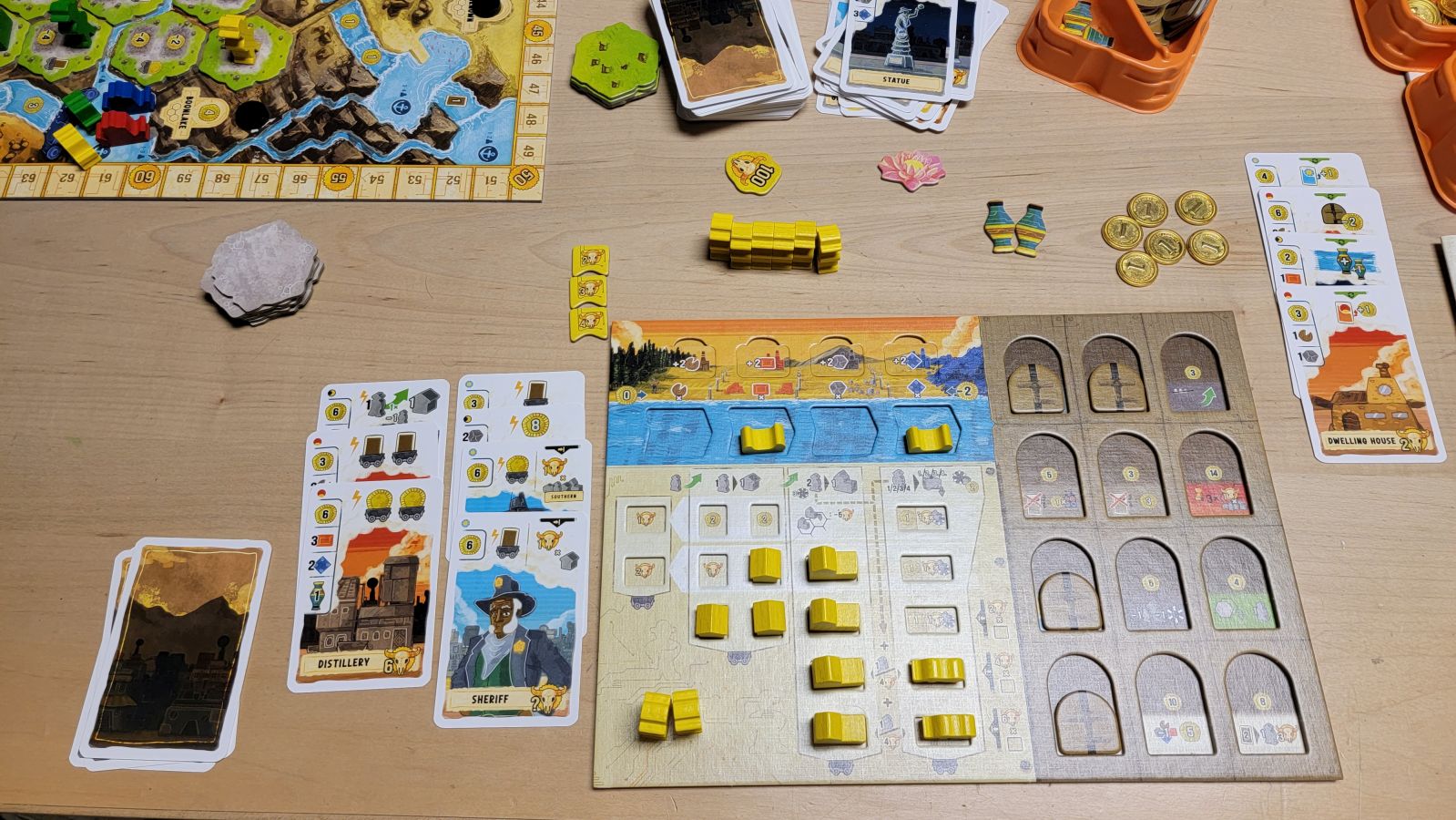 The river here is important because this is what progresses the game to the end. There are three different locks on the river and when a player passes one lock then after that players turn the first of the four phases of interim scoring occurs. This of course was preceded by players each choosing a scoring tile at the beginning of the game, and now players get to choose one of the four tiles to score during each of the interim scoring phases. After scoring has occurred play continues and players continue down the river till another player passes the second lock. The second lock is a bit different as after the scoring is done it forces all players back to a specific spot on the river and players then continue on down the river taking actions and moving their boats along the way.

This is all well and good but playing cards and settling the board are the other half of the game. Using those action tiles, players get to place tiles and move pieces from their board or upgraded pieces from their board to expand and settle the entirety of Boonlake. Placing pieces from your board costs workers from your ranch, not your supply, which at times can be confusing as the ranch is a minor part of your board. This is some of the terminology that I talked about earlier that is extremely important. Alright now you have a presence on the map. After that the game becomes about expanding that presence and capitalizing on it. It is here we see the great choice of player colors and how they nicely contrast the game board and are easy to see and track. 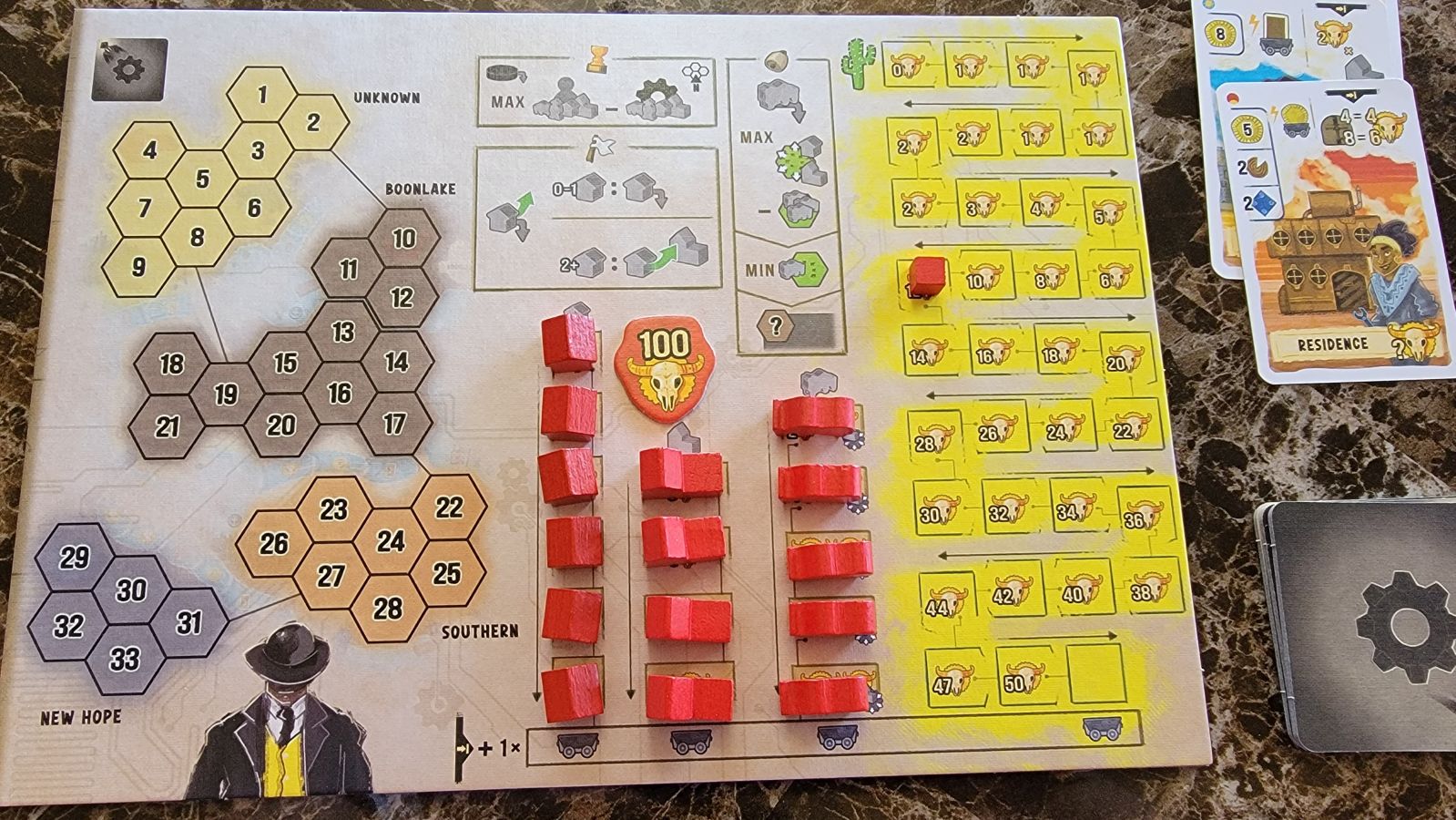 Okay so players have expanded into the territory of Boonlake, now how do you play cards to keep being able to expand further? Well on the cards there is a resource cost and in te game there are four resources. Unlike most other games where you can just generate resources once and you have a set amount for a round or turn, or other games where you have to build an engine to produce resources and take an action to produce said resources, Boonlake defies typical resource production/management for a system of their own. In Boonlake there are four resources that sit above a track where players have two canoes/boats. Players move these boats down river towards other resources in order to generate one resource of the type where the boat comes to rest. Each resource can be upgraded with tiles that can be placed from other facets of the game that generate resources on their own on top of the resources made by the boats. And finally going back upstream to earlier resources will cost money or players cannot move back up.

The resources you gain are then produced as needed when playing cards, changing up the convention of just having resources sitting around or needing to take actions to produce resources. Playing cards is a big part of the game as it often rewards you with victory points or extra workers, or lowers costs of other actions throughout the game. Often players can have hands of 10+ cards with no end in sight. All of these things are what make Boonlake great and stand out above the rest. 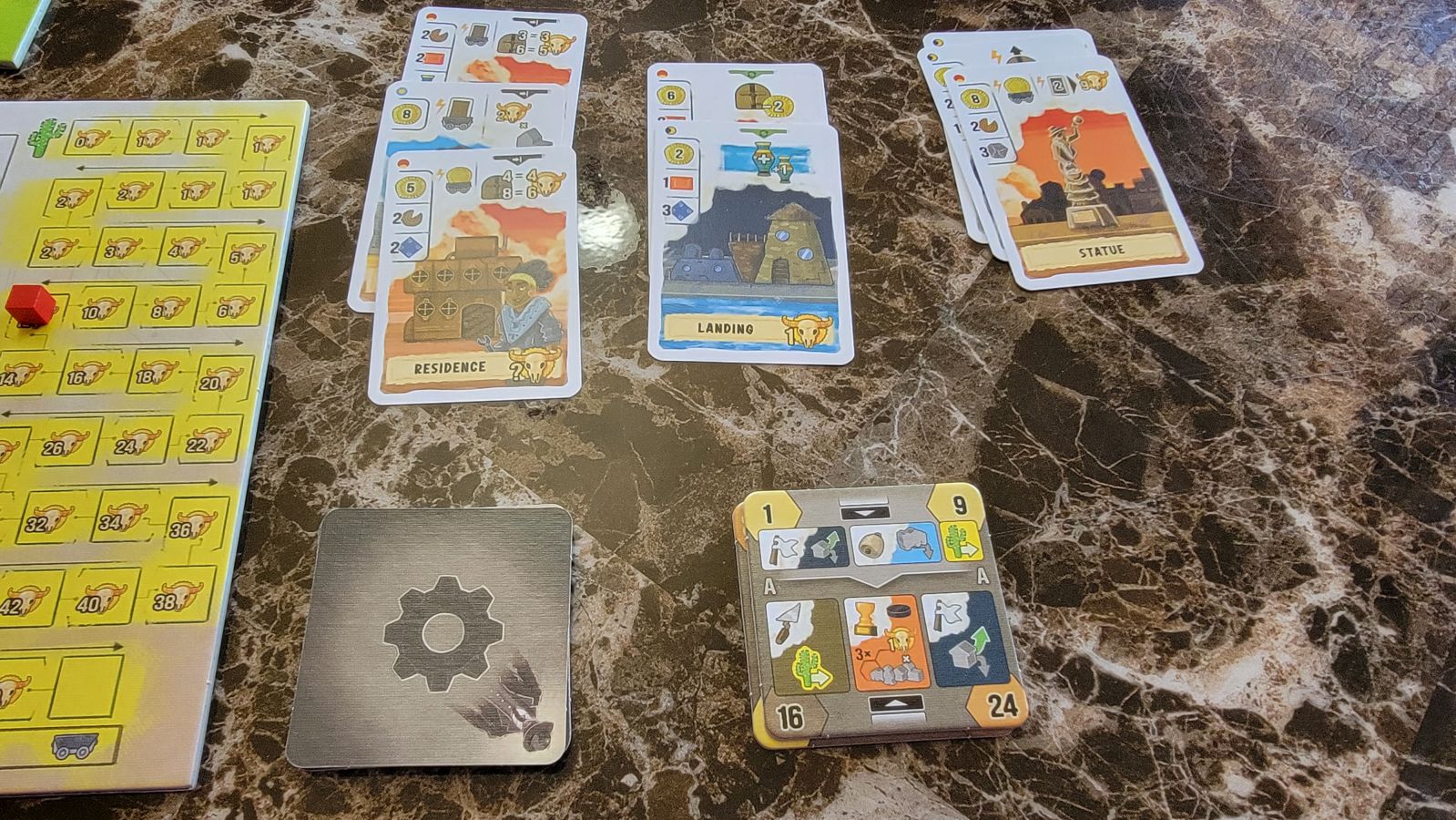 Boonlake also boasts a very fun and solid solo mode. These solo game mode variants are not ones that I typically gravitate towards and typically playing a game on my own is not as fun for me. However Boonlake’s solo mode was designed excellently, and with the varying difficulties are a ton of fun. Having tried it out myself and just barely beating the “computer” player it was a challenge I did not expect from the game, but definitely a welcome challenge. As for playing solo again I would definitely play solo again, I would also definitely try and get Boonlake to the table often.

Now the rulebook in typical Pfister fashion relies more on iconography than explicit rules instruction and so in some areas the rules need addressing to clear up confusion throughout the game. Here there is where Boonlakes other minor flaw might be that the initial teach can be a bit of a bear. Some players can lose interest instead of learning the minor parts, but as with most heavier games if players stick with the rules explanations or use a reliable video then teaching can be made a bit easier.

My experience with Boonlake is nothing but positive. From the moment the game was announced, to the moment I was able to hold it in my hands and ultimately playing the game multiple times, Boonlake is a mainstay in my collection of games. The action select, the board, player colors, among many other things keep me wanting to come back for more. It is safe to say that I would settle Boonlake and encourage everyone else to give it a try. Boonlake makes a lasting impression for years to come.