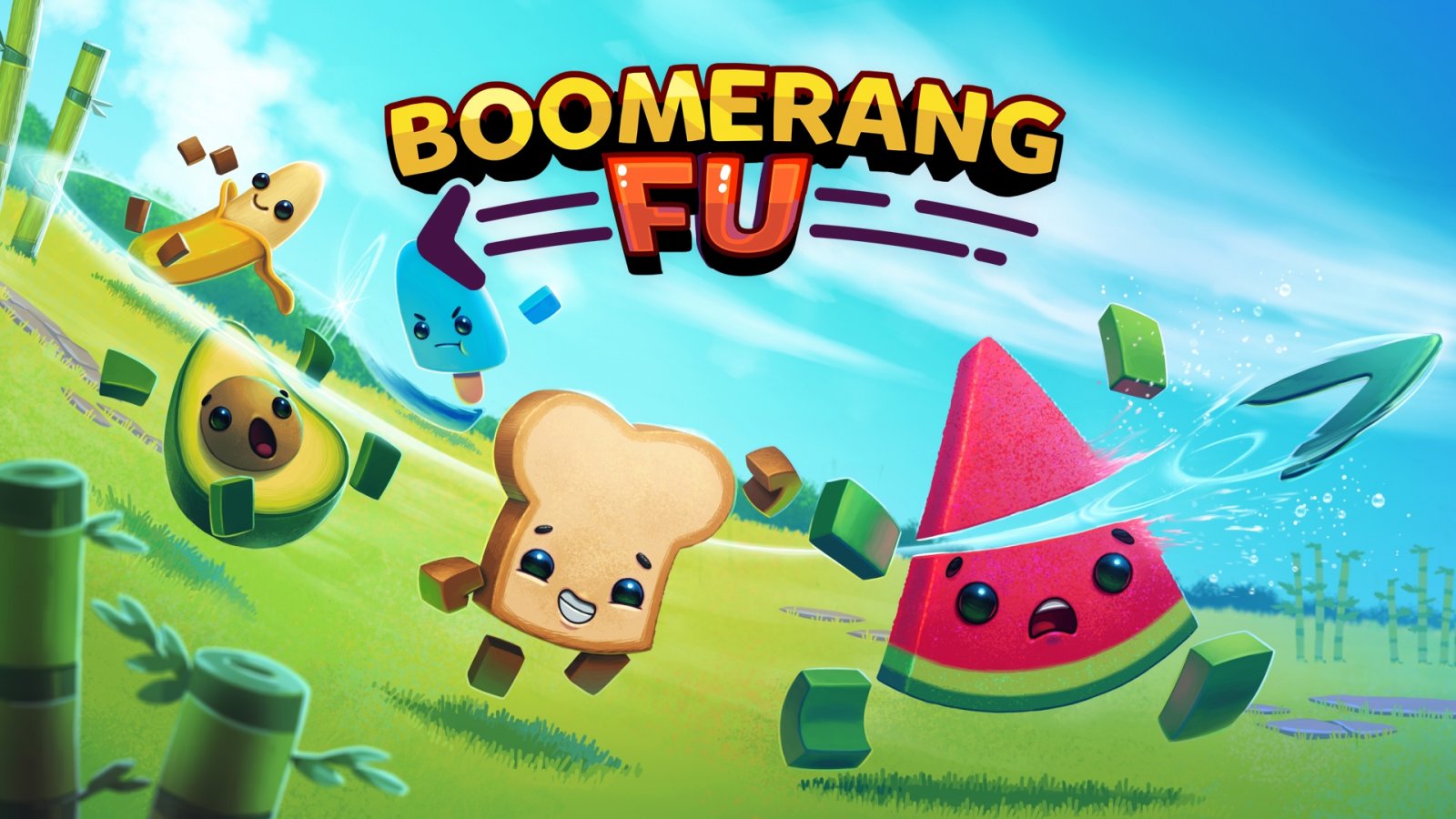 Boomerang Fu is a frantic, cutesy party-game developed by Cranky Watermelon, an indie Australian studio dedicated to “creat[ing] cute games that bring people together in times when we’re otherwise kept apart,” according to their website. It will be released on Switch, Steam, and Xbox One, August 13th, 2020, and a world that will still be straining under the weight of a pandemic is sure to embrace a game like that.

The artistic style of the game is exactly as promised- cute. The characters you play as are little foods- a donut, an avocado, a slice of bread, and so on. They’re bright, squishy-looking, cartoonish little freaks of nature with limbs that aren’t connected to their bodies, and the arenas, which could be compared to that of Yoshi’s games or Animal Crossing, certainly follow suit. Just looking at the characters makes me feel healthy and wholesome. The music accompaniments, which are also available on Spotify, are fun, poppy, electric tracks that definitely match up well with the game tonally. 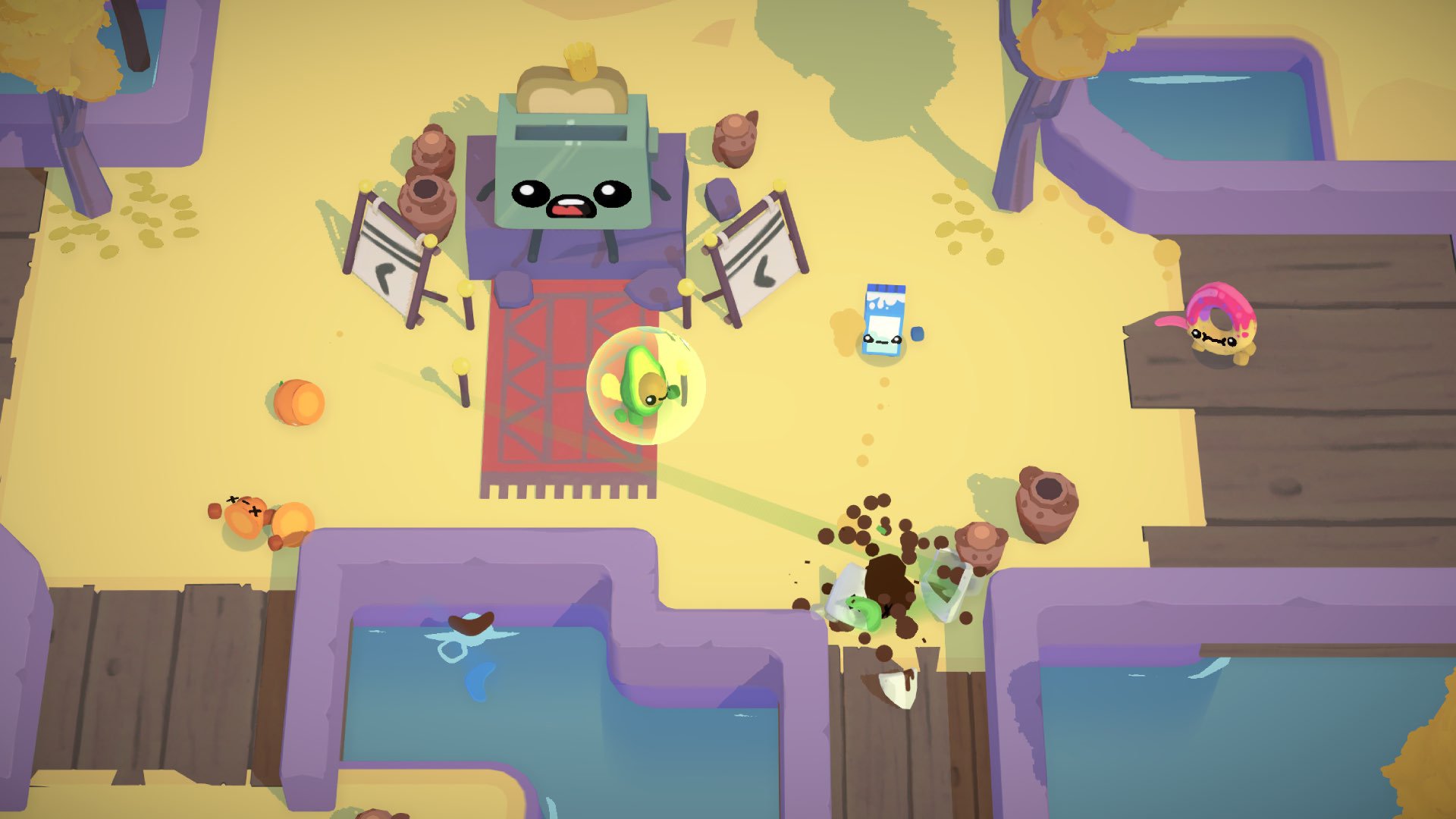 Gameplay is nuts (food pun intended.) It is ridiculously fast-paced. The levels are small enough and the characters are quick enough that the full length of a map can be traversed in around five seconds; and the boomerangs fly much quicker still. You can play with anywhere from two to six players at a time, on teams or in a free-for-all. Everyone is armed with, of course, razor-sharp boomerangs that can be thrown at enemies or wielded like a sword. Characters die with a single slice unless your team is behind far enough that the game gives you a bubble shield. Maps can also kill you with water obstacles or moving walls that crush you. There are power-ups players can pick up that give you things like an exploding boomerang, or a boomerang capable of splitting into a bunch of pieces and covering around a larger chunk of the map. A lot of kills feel lucky, or accidental altogether because it’s so chaotic. The average round of a game of Boomerang Fu only lasts about 15 seconds, and I played some rounds that only lasted 5 or 6 seconds!

A lack of customization is definitely a problem with Boomerang Fu. For example, bot characters can’t be easily assigned to specific teams. One game, I decided to play as donut, and I was going to pick the other unhealthy foods to be on my team- ice pop and bacon. Then, we would face-off against the healthy foods- banana, carrot, and avocado. But the game assigns bots automatically when you add them, and it assigns the teams automatically, so I couldn’t get the matchups I wanted unless I added bots randomly one at a time until they were in the correct pattern. There also just aren’t a whole lot of foods to choose from, maps can’t be chosen specifically or intentionally left out, and there are no options with team colors or names. Due to all of this, games just kind of blended together after a while. 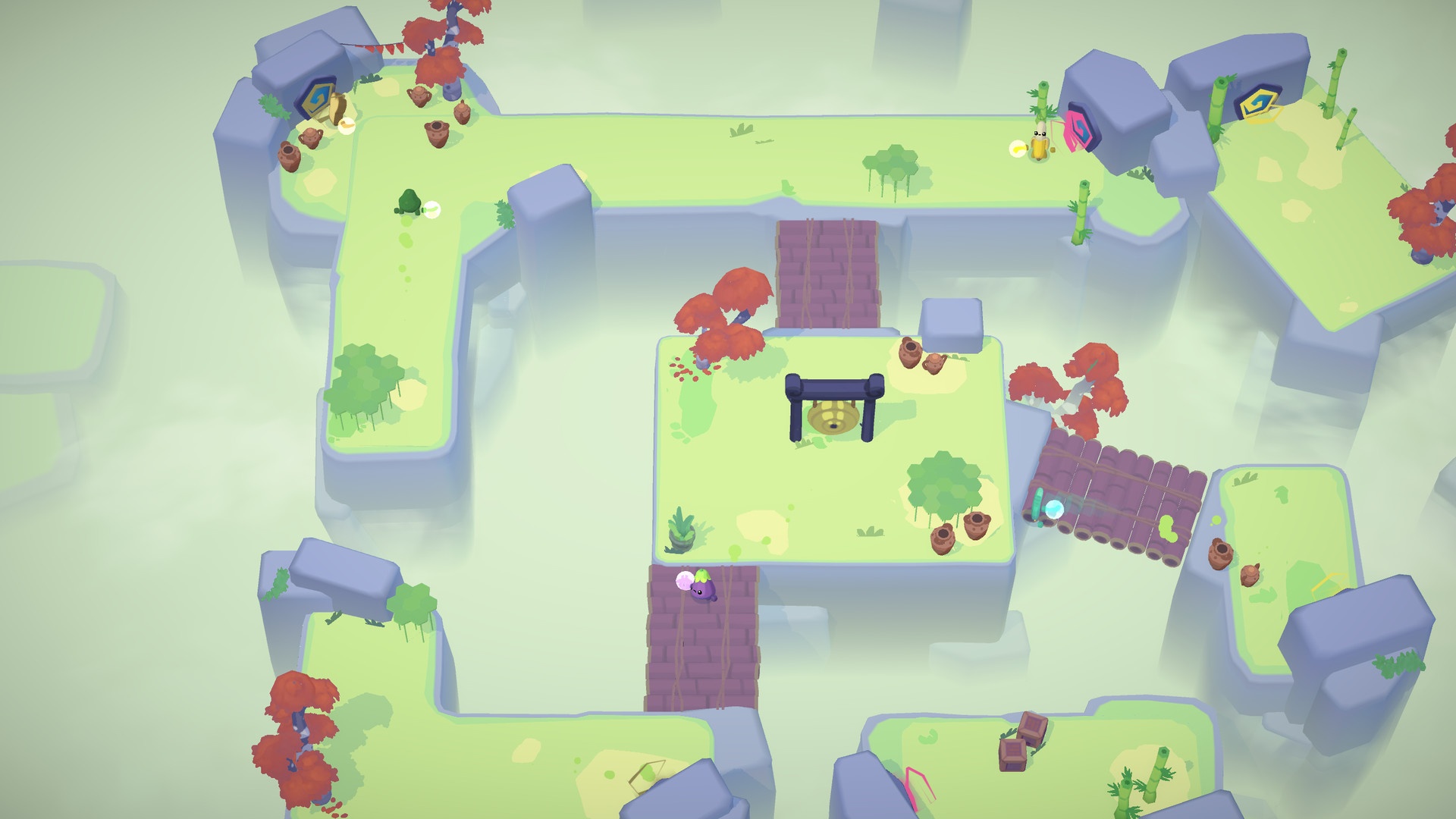 Since it is marketed primarily as a party-game, I can’t help but compare Boomerang Fu to other party-games like Super Smash Bros., Mario Kart, and Gang Beasts. All of these games have a little more customization, and their games last longer, too. Because of the frantic nature of Boomerang Fu, reflexes and awareness are critical to success- so this strikes me as the type of game best played sober. Once a few drinks are in you, you’ll be pretty hopeless; whereas a game like Mario Kart is often more fun with alcohol. And the biggest issue with Boomerang Fu is that it has no online capabilities. You can’t play with friends or with other players around the world- it is local multiplayer only. I understand that making games online-capable is difficult, but in times where the coronavirus is widespread, groups of friends aren’t supposed to be “brought together.” The world has a hankering more for online multiplayer games than for throwbacks to the days of LAN parties.

All in all, Boomerang Fu is undeniably fun for short periods of time. The characters, levels, and music is cute, the surprisingly violent killing is satisfying, and it is definitely worth a laugh or two. It put me in a good mood. I would only struggle to recommend it because of its lack of online play. Cranky Watermelon wants to bring people together, so the timing of this release is the exact opposite of ideal, and most gaming households won’t have enough controllers or players to make up for that.

Tim, originally from where Fallout 76 takes place, is a writer, soccer player, cook, baker, and of course, gamer, just looking for his teammate-in-crime. When it comes to gaming, he enjoys long walks on the beaches of Normandy. He loves traveling, especially fast traveling because it saves lots of time. He's 6' 4" so he's saving up for an XL standing desk for his TV and Xbox. He's just as comfortable going out on adventures as he is staying in with a glass of Nuka-Cola. He's very easy-going, or peaceful-going, or whatever the easiest difficulty is called. If you want him to, he'll tell your parents you met him at the Winking Skeever.
Related Articles: Boomerang Fu, Indies
Share
Tweet
Share
Submit