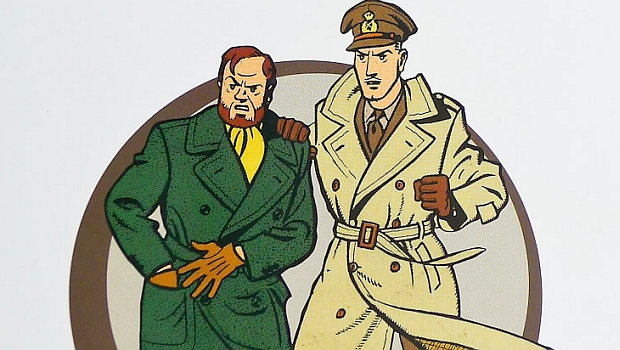 If you’re like me – American – then you probably haven’t heard of the internationally famous crime fighting duo, Blake and Mortimer. Blissful ignorance should in no way prevent you from acquiring Blake & Mortimer: Witness, the game featuring the comic book characters by Belgian writer/artist Edgar P. Jacobs. First published and set in post-WWII Europe, but expanding over the decades to locations both real and imagined, The Adventures of Blake and Mortimer follow our heroes as they pursue the evil Colonel Olrik and his cast of villains.

Witness borrows from this epic catalog of detective stories, presenting players with sixty-four cases to solve, ranging in complexity from beginner to diabolical. Jacobs’ colorful and expressive artwork permeates every page of the case files and clue books, lending a warm, comic book feel to the content.

Inside the box you’ll find the single-fold rules sheet, case files, clue books for each player, questions book, solutions book, and cutouts for each character. The theme is artfully utilized in all aspects of gameplay; players can really feel the tension of working together to solve each case. For less-inhibited gamers, play-acting the character voices between cases is a fun way to keep the ambiance of the game rolling all night long.

Witness is unbelievably simple to play, with all the instructions fitting easily across one side of the sheet, and that includes an example turn. Don’t let this elegant simplicity fool you. Even the beginner cases are hard, and the diabolical cases are near impossible.

The genius of this game is in the mechanics. Each player has a book of clues, and within each book is one-quarter of the solution to every case. To earn maximum victory points, every player must acquire all of the clues and answer the three questions correctly to solve the case. The first problem is that the questions are not known until the end. Players must convey their clues without knowing which elements are critical to the solution.

Now for the most important aspect of gameplay: players whisper their clues to the player to their left over four rounds. This means that each round every player gets an additional set of clues, passed along from the person before them, until all players have all the clues needed to solve the case.

If only it were that easy.

Anyone who ever played telephone as a kid knows just how difficult it is to communicate even simple phrases and concepts along a chain of people. Imagine trying to explain, by whispering, the shape of a scrap of torn paper, or which of three possible hair colors belonged to three possible villains, or convey which suspect held which poker cards in Sans-Pierre-Sous-Roche.

Each player must effectively communicate their own clue, then hope to clearly hear the next clue, remember both clues, and then repeat the exercise three more times, passing their own clue as well as all the other clues they’ve received. One more complication – players are not allowed to write anything down until all four clues are exchanged. Only then are the questions asked and solution revealed.

Witness can be a severe challenge. I’ve found that players take the game seriously according to their level of sobriety, making this an excellent drinking game. While it is satisfying to actually solve a case – a feeling less likely to be realized as you proceed deeper into the case files – it is even more fun when things go terribly awry. First of all, it’s hard to enunciate while whispering, and clues may be repeated but not elaborated on. The mind is at odds with itself. On the one side players are trying desperately to remember every morsel spit into their ear, but on the other, their brain is automatically, unrepentantly filtering. Stir in a couple sodas or cocktails and get ready to bust a gut laughing.

Another great thing about Witness is that a single case takes only 10-15 minutes to play. Setup takes only a minute; the biggest decision players need to make is who to sit next to. You can also take cases in any order. I recommend starting with one or two cases in the beginner difficulty level and then skipping forward so you have fresh beginner cases to use with new players at a later date.

The only significant drawback to Witness is that it requires exactly four players. The flipside of that requirement is that a pair of couples can enjoy it, even if not everyone is a serious gamer. One smaller complaint is that the English translation is not perfect, but it does not significantly impact gameplay.

I recommend Blake & Mortimer: Witness very highly for hobbyists and casual gamers alike. It is one of those rare games which can be enjoyed equally as a party game or a serious effort of deduction.