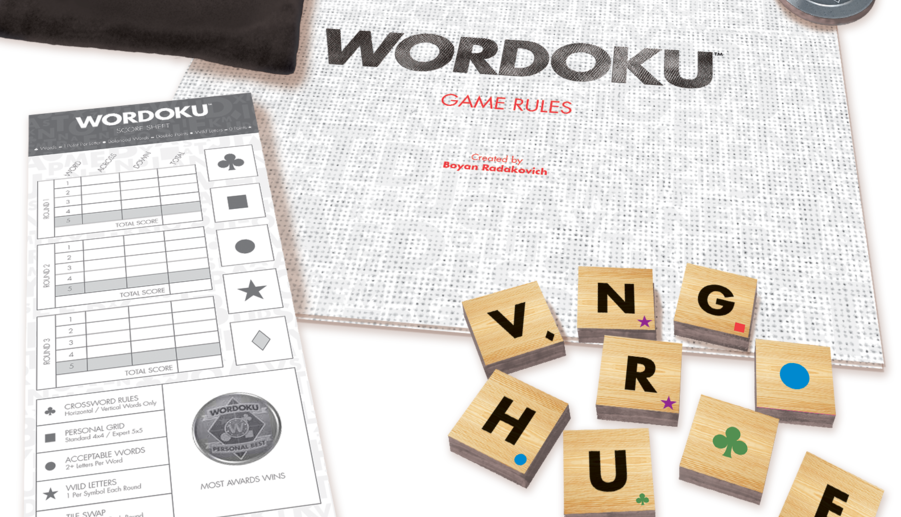 Before apps came along to waste away our free time, Sudoku was a favorite among those that liked a little game break in their day. Its speed and scaled difficulty made the game immensely popular to the point that it rivaled the crossword as the ultimate time filler. The interesting thing about Sudoku is that many mistake it for a math game, when it really is a logic puzzle. The numbers could easily be replaced by symbols, emojis, or letters. Calliope Games took the latter to create Wordoku, an amalgamation of Sudoku and Scrabble in which you attempt to create words within a grid of letters.

Wordoku uses well made wooden tiles to create a four by four grid of letters. Every letter tile has one of four symbols on it: circle, square, star, or club. Four tiles of each symbol are chosen at random and placed in rows. You flip them over to reveal your starting letters. From there, you have five minutes to rearrange the tiles to create as many words as possible both vertically and horizontally.

Wordoku is set up in a grid so words can be formed horizontally and vertically.

Any letter in a row will also be used in a column. Your goal is to move the letters to create as many words as possible both vertically and horizontally. The club tiles are the vowels, so you’ll begin with only four while consonants populate the rest of the board. During your five minute round, you can substitute one tile for another with the same symbol. You may also flip one tile to its symbol side to act as any letter you choose, though doing this prevents that tile from scoring at the round’s end.

Once five minutes are up, you score the round by finding the longest word in each column and row. Each letter used in the word scores one point, but you can double the score of your word if you used a different symbol for each letter within the word. For example, if hip was spelled using the club, square, and circle symbols, you would score six points instead of the normal three.

Your score for the round does not carry over. Instead, Wordoku uses award tokens. The player with the highest point total in the round gains a token. A new round begins with a new set of letters. Now, you can earn award tokens for improving your score the most as well as earning one for the highest score. The third and final turn plays just as the second, and you win the game if you have the most tokens at the end.

Letters can be flipped to their symbol side to be played as a wild tile.

As you play, you’ll be pressed on how best to use the limited vowels at your disposal, but the more you play the less taxing the game becomes. With a four letter word limit, true wordsmiths will struggle to find a long term challenge and moving the tiles around takes away the logic element that makes Sudoku addictive. Wordoku is a puzzle where you figure out how to score the maximum points, but rarely will you be unable to get a decent score in each round.

The scoring also allows you to manipulate the game somewhat. With only one token at stake in the first round, it really doesn’t behoove you to give your best effort. By waiting and putting forth a real effort in the second round, you could nearly guarantee yourself the most improved token and possibly win the round token as well. Since, at most, three tokens are needed to win the game, such a strategy could pay off at the expense of the game’s long term appeal.

Calliope does suggest upping the challenge by expanding the game to a five by five grid. This does help those looking for something more from the game, but the game really needs a board to help keep all the tiles in order.

Wordoku is certainly a game that younger players or those unfamiliar with word games can be competitive against experienced players. It would be a nice introductory game for those curious about word games without the need to have an extensive vocabulary. Yet, those wanting a more serious challenge will need to look elsewhere.

On the surface, Wordoku is a fine game with an unique blend of word and Sudoku games. Yet, there’s not enough difficulty here to challenge fans of either style of games. It is worth a play, but lacks the replayability to keep it in your collection.