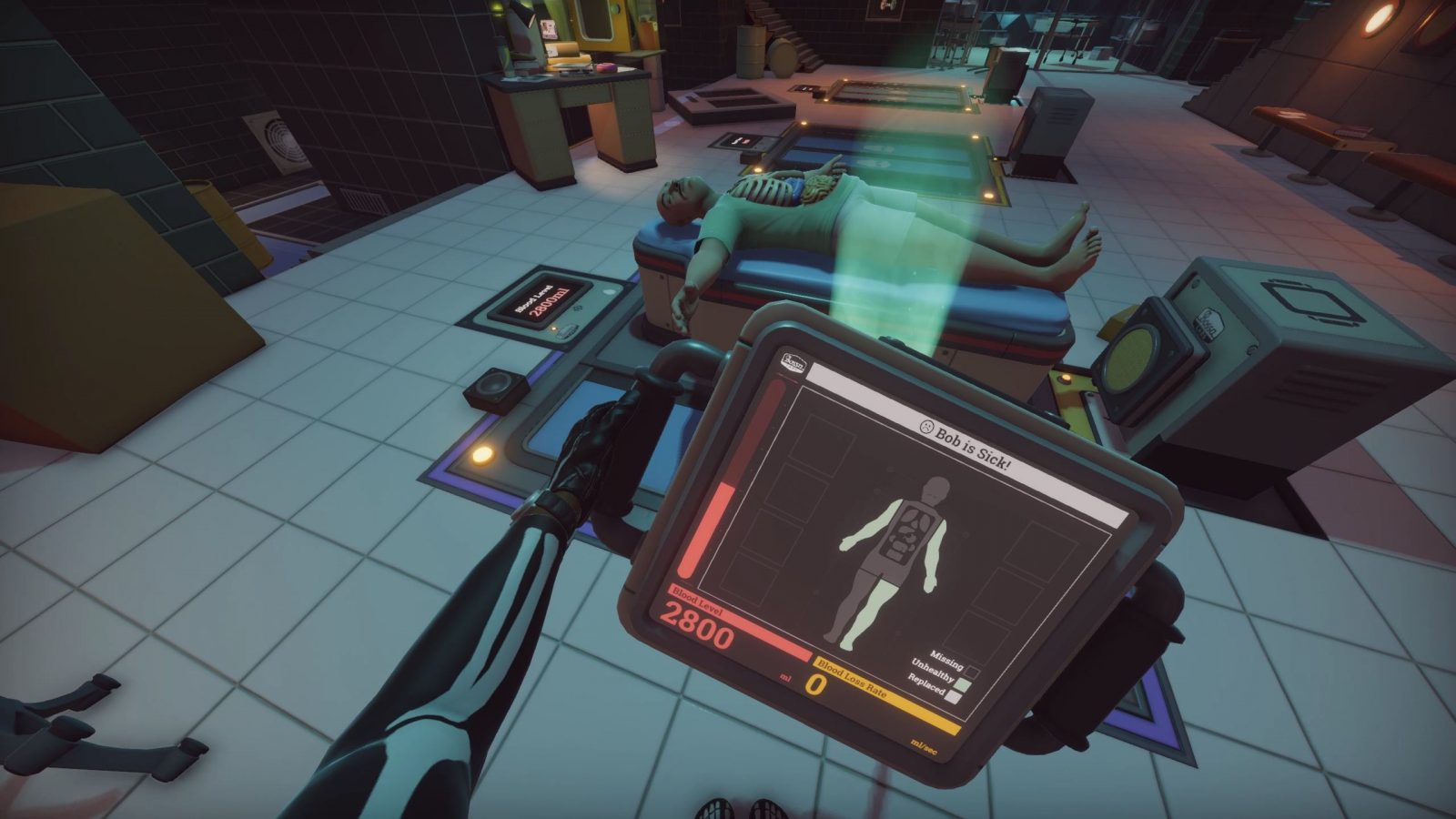 When the series first began under the title Surgeon Simulator, it centered around using terrible controls to do crazy things. For that reason, the game stuck as a trend for YouTubers to make extensive videos with and dominated the gaming community for the same length of time. It was fun, but it was repetitive, and soon those 15 minutes of fame passed. But now, developer Bossa Studios have attempted to fix those issues that plagued the last game, and have recently released Surgeon Simulator 2. I’ll tell you now, they did a fantastic job.

While Surgeon Simulator may have (mostly) had you move a single hand and play Operation on an unconscious dude going by the name Bob, the newest title goes far beyond that. With far more mechanics and a story to boot, there’s plenty of time to get stuck into this game. But first, the story. You can play a variety of characters (mostly as an aesthetic thing, however) that are all surgeons in training as part of the Surgeon Simulator Program. A narrator (of sorts) named Pam trains anyone and everyone who wants to become a surgeon. As you progress through the story, things get a little weird, but I won’t delve into the story further without spoiling it. 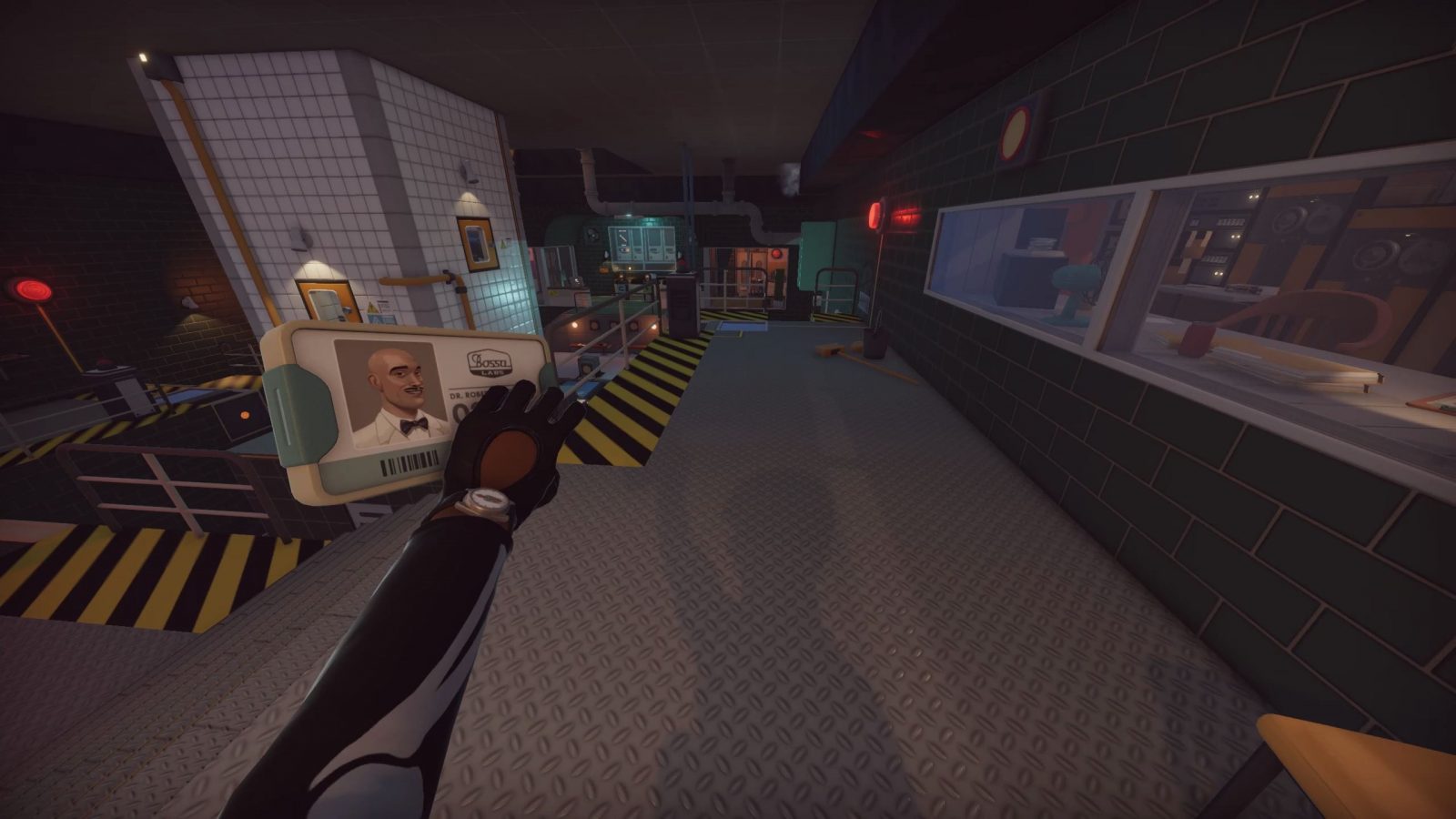 The gameplay of SS2 is a huge improvement over its predecessor

As for the gameplay, it takes from Surgeon Simulator 1 and enhances it; so, you still have the janky hand controls, but instead, you’re no longer restricted to being planted in front of a patient. Instead, you’ll be able to explore the level in its entirety, and complete puzzles along the way. Yes, I said puzzles, and yes I really meant it when I said it’s not nearly as restrictive as the prior title. There’s plenty of exploration to do, hidden rooms to find, all of which just adds to the gameplay. Coupled with the mindless violence of ripping off Bob’s head, or the chaos of trying to get your teammates to work together on the co-op mode, it makes for some interesting and unique gameplay.

There’s a variety of items to choose from in order to help successfully perform your operations, and you might notice a few items that are coming back from Surgeon Simulator 1. You’ll use a hammer to crack bones, saws to cut through limbs, and two types of syringes which include a red one to increase the volume of blood in a Bob and a yellow one to clot any blood and prevent blood loss. If saws, hammers, and syringes aren’t your thing, you can always just use your hand and commit malpractice! Once you complete a level (and depending on how well you did), you can unlock a variety of cosmetics to dress up in; ranging from a doctor’s outfit to a hazmat suit, to a variety of Halloween costumes. And there’s plenty to unlock, so expect replayability there. 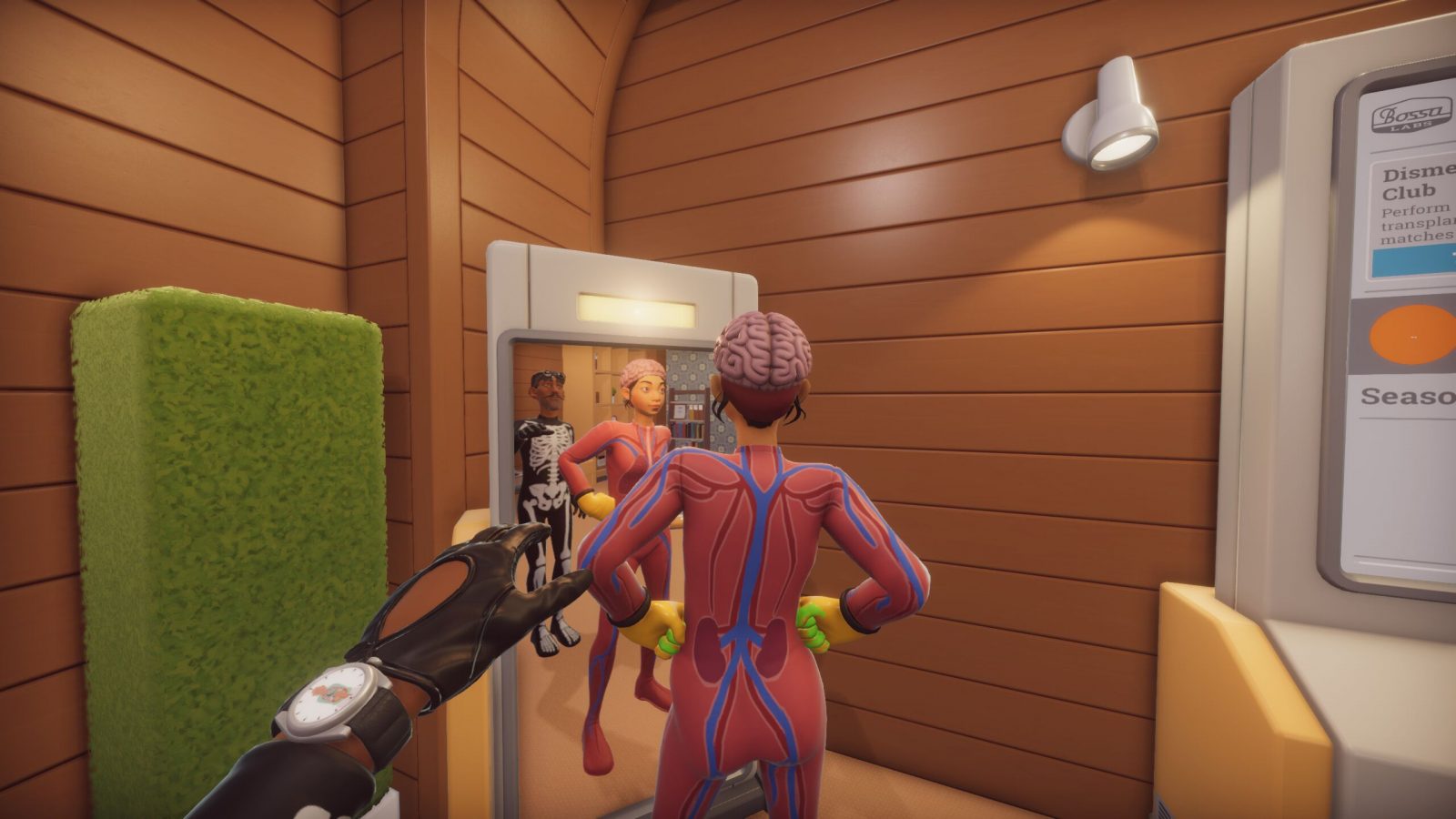 The puzzles in this game are simple tasks, so don’t expect anything mind-boggling. One might include pushing a ball through a small hole in the wall to activate a button on the other side, or removing Bob’s limbs or organs and placing them on a scale to unlock a door. There were, however, some moments when I didn’t know how I was meant to complete a puzzle, even when I knew what the end result of the puzzle would be. In these moments, I’d recommend doing what I did; get creative. Utilize everything that’s on offer. Can’t get an elevator working because you can’t find a fuze to power it? Layer some boxes and equipment over one another until you get to the top. Playing by yourself and can’t seem to prevent Bob from losing too much blood? Use the crazy physics engine to rip out the limb and replace it in one swift motion. The best thing about this game is that it rewards outside-the-box thinking, rather than limiting you to a specific path to complete a puzzle.

But, if you’re planning on getting this game to play solo, I’d highly advise against it. Surgeon Simulator 2 is made with co-op in mind, and you can see that just from the lobby system they’ve created. The lobby is a waiting area for you and your friends. It hosts a message screen detailing what you’ve unlocked, what level you are (etc), a central control panel that allows you to select a mission or play the community maps, a mirror to customize your appearance, and 4 identical pneumatic tubes to take you to your desired location. When playing with friends, your experience with the game will improve ten-fold, and with games focusing less on co-op gameplay over singleplayer and multiplayer experiences, it’s definitely worth utilizing everything this game has to offer. The co-op gameplay reminds me a bit of Human Fall Flat, in the sense that you may be working towards the same goal, but the path to get there comes down to the decisions you make. You can either work as professionals do; cutting the limbs of correctly and balancing the volume of blood lost. Or you can embrace the chaos and work towards speedrunning the operation. In short, while the path to the goal is linear, your decisions are what shapes the experiences to be had. 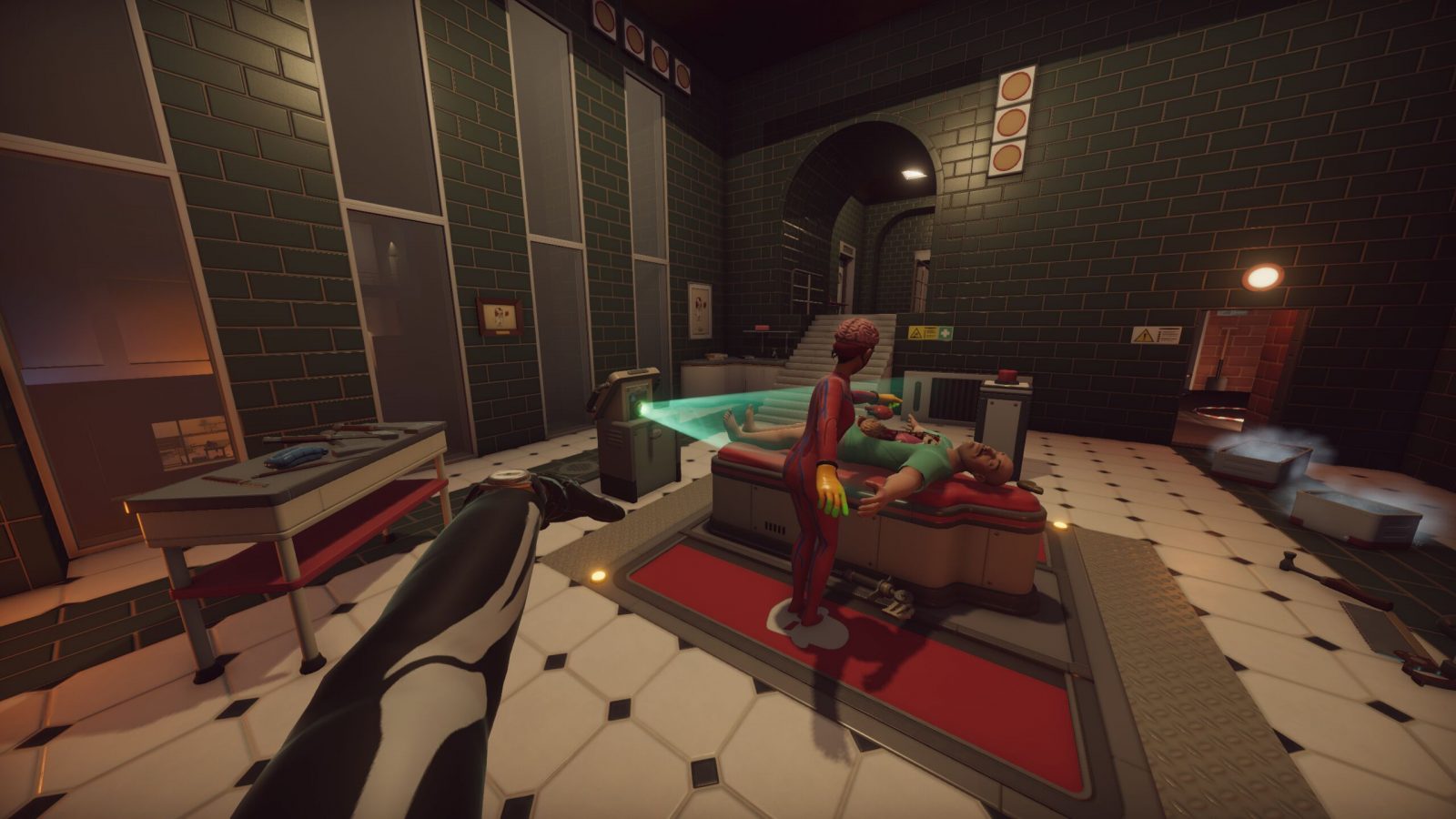 SS2 is a cooperative-minded game, so bring your friends into it!

From the get-go, the game sums up what makes co-op so great; the lobby system where you could mess around in, chaotic gameplay that can only be completed through trial and error, unique and interesting gameplay that’s only improved when playing with friends. Games like Portal 2 co-op and Human Fall Flat do this so well. And so they have, in turn, become cult classics and are fueled by a lot of community support behind them. It seems Bossa Studios are aware of this and have funnelled it all into one game. And yet, it’s still cohesive; while the game may seem daunting at the start due to janky controls, you’ll quickly master them and enjoy everything this game has to offer.

Typically, at this point in the review, I’d have something to say by way of the glitches to be experienced or any issues I’ve had with the title. Thankfully, in the case of this game, I have yet to come across anything game-breaking. It’s perfectly polished, all the way down to the technical aspects of the game; I didn’t experience a single bug in my time with the game, and I didn’t have any frame rate drops through playing it either. The only frame rate drop I experienced was loading into the lobby and having friends join my game. This is negligible because the game was effectively “warming up” and allowed for all subsequent hours spent to be a polished experience. The recommended PC specifications to run this title include Windows 10 64 bit, an Intel Core i5 – 4670 CPU, 8 GB RAM, a GTX 770 GPU, and 10 GB storage space. If not, the minimum specs include Windows 7,8, and 10, an Intel Core i3-3225 3.3 GHz, 4 GB RAM, a GeForce GTX 460, and 10 GB storage space. All that geeky stuff basically means you can run this on the most potato of PCs and have no issue whatsoever. While my specs are higher than that my PC is by no means the beast it once was, and yet I still managed to play this game on max settings in 1440p, run Google Chrome (the most intensive of programs) in the background, as well as stream this on Twitch, and still encounter zero framerate drops. That’s impressive and even more impressive that it’s the first build of the game with no discernable technical issues. I cannot praise Bossa Studios’ work enough here. 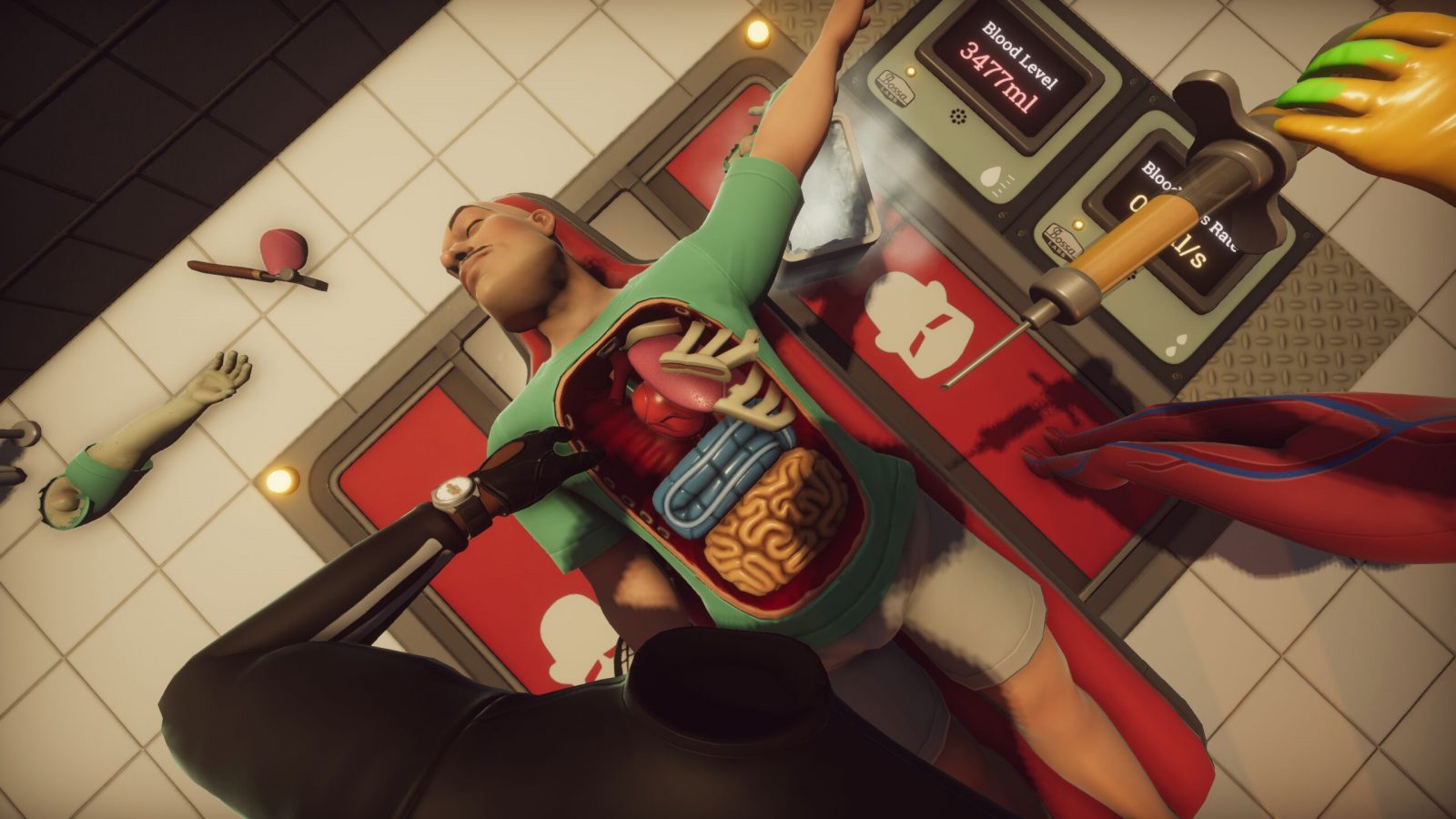 Plenty of jank to deal with when completing an objective, but it all adds to an overwhelming fun experience

There are some things I will mention that interested players of Surgeon Simulator 2 should know. While I didn’t have an issue with them, I’m sure others will not think the same. You should expect the same level of difficulty in operating the hand as you would in the first game. I can’t stress it enough, but playing with a friend is practically the only way to go. It’s hard in solo mode trying to keep Bob alive, all the while balancing a multitude of tasks during the operation. In co-op mode, things get a lot easier and will make the experience a lot more pleasant. Also, unfortunately, there’s no save system, and the only checkpoint is at the start of the level. I didn’t have an issue with it because it’s easy to catch up where you left off, but someone who might have to close the game midway through a level will be in for a surprise when they boot the game again. Again, while I didn’t personally have an issue with any of these design choices, it’s best to go into the game knowing full well what you’re up against.

All in all, Surgeon Simulator 2 turned out to be a fantastic, chaotic experience that’s perfect in nearly every way. It’s best enjoyed with a friend to make the game easier, and to experience some of the most unique gameplay to date. While the controls might seem daunting, it doesn’t take long to master them and find yourself completing each level with ease. At the end of the game, if you still want to commit more malpractice, there’s plenty of replayability by way of community maps and cosmetics to unlock. Bossa Studios really outdid themselves with this one.

Bossa Studios took the mayhem of the first game and enhanced it ten-fold. Surgeon Simulator 2 is a blast to play, and even better enjoyed with friends. The unique gameplay, combined with unforgettable co-op experiences and a wholly polished title, makes this game a worthwhile purchase.

With a deep interest in writing, Ben followed that into a Journalism degree. As an avid lover for gaming, he is constantly expanding his library with console, PC, and VR games. He's obsessed with stealth games and loves hunting down the smallest of details inserted by devs.
Related Articles: Surgeon Simulator 2
Share
Tweet
Share
Submit